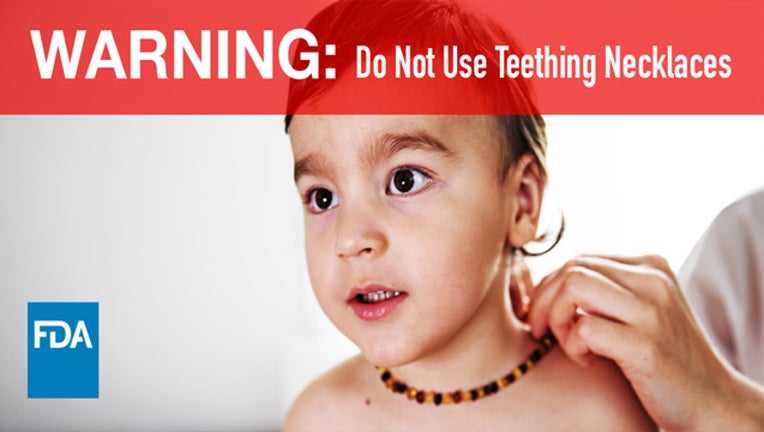 The FDA is warning parents about the use of teething necklaces and bracelets after a toddler died. Source: FDA

WASHINGTON - The U.S. Food and Drug Administration is warning parents about the risks of jewelry used to relieve teething pain after a toddler died.

The FDA said the incident involved an 18-month old child who was strangled by his amber teething necklace during a nap. The agency said it had also received a report of a 7-month-old baby who choked on the beads of a wooden teething bracelet and was taken to the hospital.

“We know that teething necklaces and jewelry products have become increasingly popular among parents and caregivers who want to provide relief for children’s teething pain and sensory stimulation for children with special needs. We’re concerned about the risks we’ve observed with these products and want parents to be aware that teething jewelry puts children, including those with special needs, at risk of serious injury and death,” FDA Commissioner Scott Gottlieb, M.D. said in a news release.

“Consumers should consider following the American Academy of Pediatrics’ recommendations of alternative ways for treating teething pain, such as rubbing inflamed gums with a clean finger or using a teething ring made of firm rubber. Given the breadth of the market for these teething necklaces and jewelry, we’re sharing this important safety information directly to consumers in order to help prevent injuries in infants and kids.”

The FDA stressed that the risks of using these types of jewelry for relieving teething pain includes not only choking and strangulation but also injury to the child’s mouth and the possibility of an infection. Choking may happen if the jewelry breaks and a small bead enters the child’s throat or airway. Strangulation could happen if a necklace is wrapped too tightly around the child’s neck or if the necklace catches on an object such as the crib.  The FDA said it is also concerned that a piece of the jewelry may irritate or pierce the child’s gums.

According to the FDA, amber teething necklaces contain a substance called succinic acid, which the FDA says may be released into an infant’s blood stream in unknown quantities.

“Manufacturers of these products often claim succinic acid acts as an anti-inflammatory and relieves teething and joint pain. The FDA has not evaluated these claims for safety or effectiveness and recommends parents not use these products,” the press release stated.

The FDA also recommended that caregivers avoid using teething creams, benzocaine gels, sprays, ointments, solutions and lozenges for mouth and gum pain. Benzocaine and other local anesthetics can cause methemoglobinemia, a serious condition in which the amount of oxygen carried through the blood is reduced. This condition is life-threatening and can result in death.