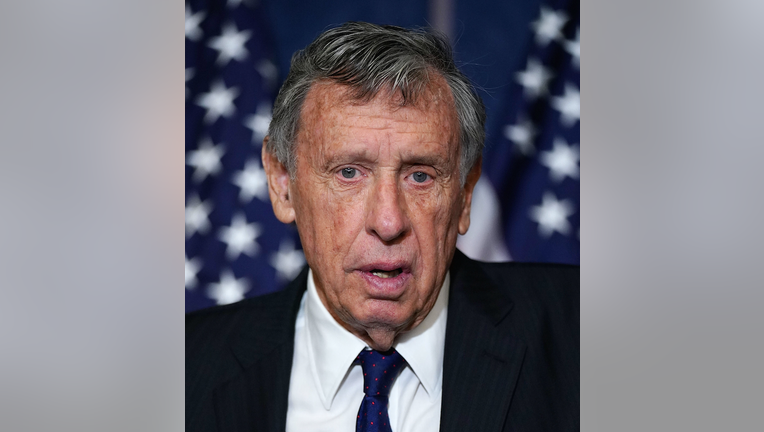 WASHINGTON, DC - OCTOBER 25: University of California Regent Richard Blum speaks during a news conference with Democrats from the House and Seante, 'Dreamers' and fellow university presidents and chancellors to call for passage of the Dream Act at th

BERKELEY, Calif. - The husband of U.S. Sen. Dianne Feinstein, Richard Blum, was a University of California regent who wrote “an inappropriate letter of support” that helped admit a student to UC Berkeley, one at least 64 wrongful admissions to the UC system, according to the state auditor.

But in an interview with the San Francisco Chronicle, Blum said he'd been writing such letters for years and “no one ever told me it was wrong.” He told the newspaper he has sent letters of recommendation about friends and family for years to the chancellors at multiple UC campuses, including Berkeley, Davis and Irvine.

“I did it a bunch of times,” Blum told the newspaper. “Usually friends. My cousin’s brother wanted to get into Davis. They’d send me a letter and tell me why it’s a good kid, and I’ll send it on to the chancellor. Been doing it forever.”

Blum's admission comes two days after the California State Auditor found that the UC schools inappropriately admitted at least 64 wealthy, mostly white students over the past six years as “favors to donors, family, and friends.”

“This is a significant problem that the university needs to deal with,” State Auditor Elaine Howle said in a telephone interview with the Associated Press. “Let’s hope this isn’t occurring across the country, or at other universities in California. But it is very concerning.”

As for Cal specifically, she added: “UC Berkeley really had some significant weaknesses in their admissions process. The audit found the elite school admitted 42 applicants who were the children of staff and donors, while denying admission to others who were more qualified."

The audit examined admissions policies and practices over the six academic years from 2013-2014 to 2018-2019 at four of the UC’s nine campuses — UCLA, UC Berkeley, UC San Diego and UC Santa Barbara.

Auditors found that at least 22 applicants were falsely designated as student-athlete recruits “because of donations from or as favors to well-connected families.” These students “had little or no athletic skills,” Howle said.

The report did not name students, coaches or specific sports but the investigators looked at a mix of teams at each campus, including soccer, crew, golf, water polo, swimming, track and field, women’s basketball and men’s tennis, the report said.

It identified at least 13 applicants improperly admitted as student athletes to UC Berkeley, four each at UCLA and UC Santa Barbara and one at UC San Diego.

In one case, the child of a major donor applied to UC Berkeley and received the lowest possible score on their application, which was marked, “Do Not Recommend,” the report said. But the application was revived by an associate director of the donor relations department who contacted a coach to say the family had “a huge capacity and is already a big supporter of Cal.” The coach backed up the applicant as a prospective student athlete, “even though the applicant had played only a single year of the sport in high school and at a low level of competition.” After admission, the applicant’s family donated several thousand dollars to the team, the report said. “The applicant never competed with the team, and the coaches removed the applicant from the team after the season ended.”

A UCLA coach admitted a student as an athlete, as a favor to a donor — even after the student’s application had been marked, “Denied,” the report said.

Howle said she believes the findings have barely scratched the surface of problems in the UC admissions process. The majority of the 64 applicants were white and at least half had annual family incomes of $150,000 or more, the audit said.

Those 64 students were identified in the audit based on “definitive evidence,” such as emailed communications showing a student was denied admission but then reconsidered and accepted after an athletic coach or the development office got involved to suggest the student’s entry could lead to donations, Howle said.

“There’s at least another 400 or so students ... that were really questionable,” Howle said, including some student athletes who didn’t appear to have any athletic ability.

UC President Michael V. Drake, who took over the job in July, said in a statement that he took the findings and recommendations “very seriously and will do all I can to prevent inappropriate admissions” in the 285,000-student system.

“The University will swiftly address the concerns the State Auditor raised. Furthermore, individuals involved in improper activities will be disciplined appropriately,” Drake said. “Unethical means to gain admission, as rare as they may be, run contrary to our longstanding values of equity and fairness.”

The audit recommends the president’s office take a robust role in auditing admissions at the nine campuses, closely examining “admissions by exception,” that are granted for student athletes, artists, or those who have other specific talents that are attractive to a campus.

The audit was requested last year by state Assemblywoman Tasha Boerner Horvath in response to the national college admissions scandal, which embroiled prestigious universities nationwide, athletic coaches and dozens of wealthy parents. The scandal shed light on the murky world of U.S. college admissions and how the rich and famous exploit it to buy their children’s way into top schools with rigged test scores or fake athletic credentials. At the center of the scheme was Newport Beach-based college admissions consultant, William “Rick” Singer.

The audit’s findings go beyond those investigations, known as Operation Varsity Blues, which had previously identified at least three students at UCLA and UC Berkeley who were improperly admitted.

Then-UC President Janet Napolitano ordered an internal investigation of all UC campuses that resulted in a sweeping list of recommendations aimed at better policing of fraud and conflicts of interest in student admissions. It called for stronger verification of claims on students’ applications, reviewing potential links between donors and applicants and stricter scrutiny of students admitted for special talents.

However, Howle found that staff were insufficiently trained and supervised in reviewing applications, “which led to inconsistent reviews, and affected applicants’ chances of admission.”

“The Office of the President has allowed weaknesses to persist for years and has not ensured the admissions policies and processes have been consistently and fairly applied from campus to campus,” the audit said.

She also recommended that the president require campuses to verify athletic talent and review donation records before admitting prospective student-athletes.

“This is a significant problem that the university needs to deal with,” State Auditor Elaine Howle said in a telephone interview with the Associated Press. “Let’s hope this isn’t occurring across the country, or at other universities in California. But it is very concerning.”