The event was organized by the Sons of the American Revolution.

AUSTIN, Texas - More than 3 thousand American flags were placed on military graves at the Texas State Cemetery ahead of Veterans Day. The event was organized by the Sons of the American Revolution.

"This is a job of love and affection to pay our respects to all of these fallen soldiers who gave their lives for what we have here," said Jim Clements. It’s Jim Clements' 5th year. For him, it’s not just a tradition but a promise kept.

"The program is, when you put the flag in the ground, you say the name of the veteran buried at that tombstone and you salute them and thank them for their service. Saying their name, whether aloud or to yourself, you're honoring their service and keeping their spirit alive," said Clements.

Keith James is among the volunteers who stepped up a few years ago when support started to dwindle. "It’s amazing to see the community come back together and say, our veterans are very important to us, and we show that every single day," said James.

It’s the first time for Lucy Almagro. She came out with other members of the Daughters of the American Revolution.

"Yes, I've never done any of this before, I've never been in the cemetery and I've driven past it like a zillion times, thinking I really want to see this cemetery. It’s humbling, and it’s a feeling of gratefulness," said Almagro. 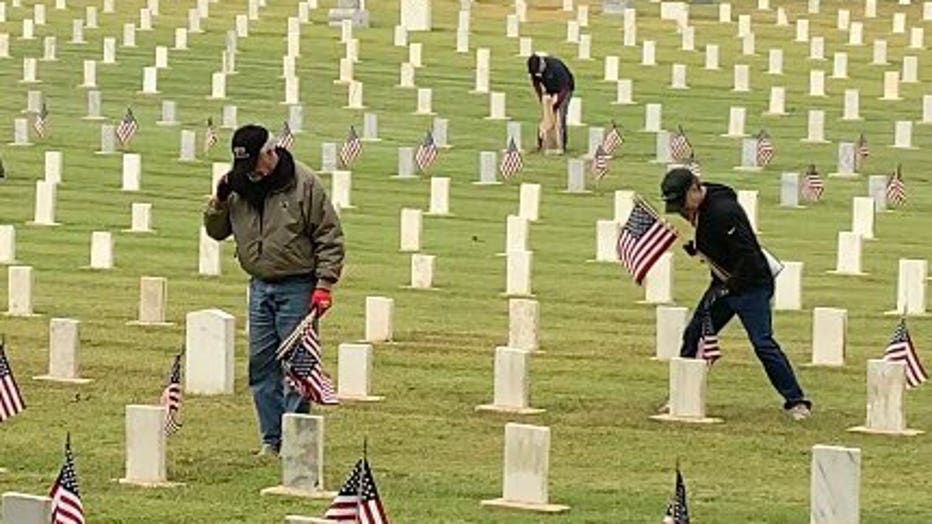 More than 3 thousand American flags were placed on military graves at the Texas State Cemetery ahead of Veterans Day.

This mission did not end with the last flag put up.

The next mission happens in December, with a wreath for every gravesite. "A lot of work to do, and getting the word out is so important because it’s amazing how many people have not heard of it," said Sherilyn Owren.

Owren and her group have raised a third of the funding they need for the Wreaths Across America event. It’s set for December 18th. Her grandson, Remmer, collected $10 thousand last year, during the pandemic. He is now going door to door to beat that mark.

This 9-year-old doesn't have to look far for role models. They're now clearly marked. From a field of white headstones, where those who fought during a low point in the nation's history finally rest.

To the highest point in the cemetery, where a flag also stands at the resting place for the last man who set foot on the moon.  A place to be honored and not just on the 11th hour of the 11th day of the 11th month.

U.S.VETS launched its campaign called "Make Camo Your Cause" to establish the camouflage print as the official symbol to honor its veterans.

"Camo was designed to conceal and protect our soldiers in combat. Today, in America we wear camouflage to stand out from the crowd and to demonstrate our patriotism and pride," the organization wrote. "With your support, #HONORUSVETS will give camo a new meaning, showing the community you believe our veterans deserve every opportunity to live with dignity and independence."

The organization encourages employees and customers to wear camo clothing and share their message on Veterans Day.

How to get involved

FOX Corporation and its employees are working with U.S.VETS to support their "Make Camo Your Cause" campaign by spreading awareness to the campaign and wearing camo to support the cause on Veterans Day.

In order to bring visibility and awareness to the campaign, FOX is asking businesses to purchase apparel from U.S.VETS online shop and wear camo with U.S.VETS this Veterans Day and post on social media using #HONORUSVETS. U.S.VETS is also looking for volunteers in the fight against veteran homelessness.

"If you are compassionate, hardworking, or just looking for a way to give back to the community, volunteering at a U.S.VETS location would be a rewarding experience for you," U.S.VETS wrote.

In addition, employers can "hire a vet" through the U.S.VETS Career Network, which connects professional and student veterans with lasting careers they love.

Donations to the organization can also be made on its website.

The organization has 32 sites across 11 regional locations in California, Nevada, Arizona, Hawaii, Texas, and Washington D.C. and offers temporary and permanent housing solutions and comprehensive services to veterans and their families nationwide.