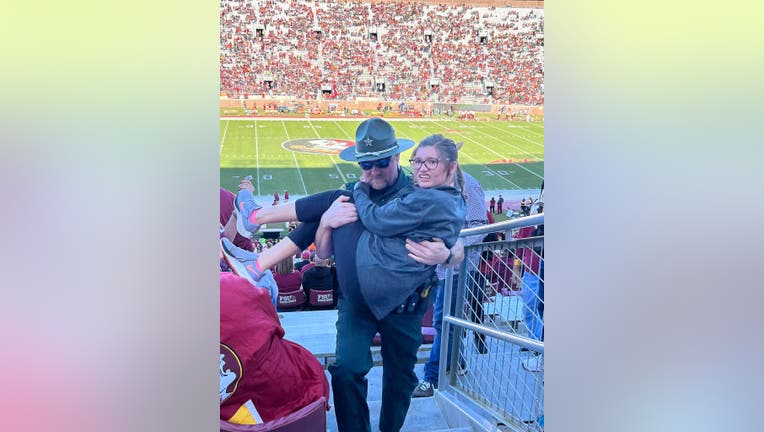 TALLAHASSEE, Fla. - A Leon County deputy noticed a girl was having a difficult time walking to her seat at a Florida State University football game – 30 rows high – and offered some assistance.

According to one FSU fan, Deputy C. Hall with the sheriff’s office was working the game on Saturday, Nov. 13 as the team faced off against the University of Miami.

"I just wanted to take a minute and recognize Deputy C. Hall," Britney Howard wrote in her Facebook post. "This young girl, that has difficulty walking, was struggling to get up the steps to her seat so he asked her and her mother if they would be okay with him carrying her."

Howard, who told FOX 13 that she doesn't personally know the deputy or the girl, said it occurred before kickoff.

READ: ‘A little too extreme’: Tampa family could face fines for putting Christmas lights up before Thanksgiving

The Leon County Sheriff's Office also shared the photo, saying Deputy Hall walked up 30 rows with the unidentified girl in his arms.

"He did not hesitate one bit in offering to do so," Howard wrote.