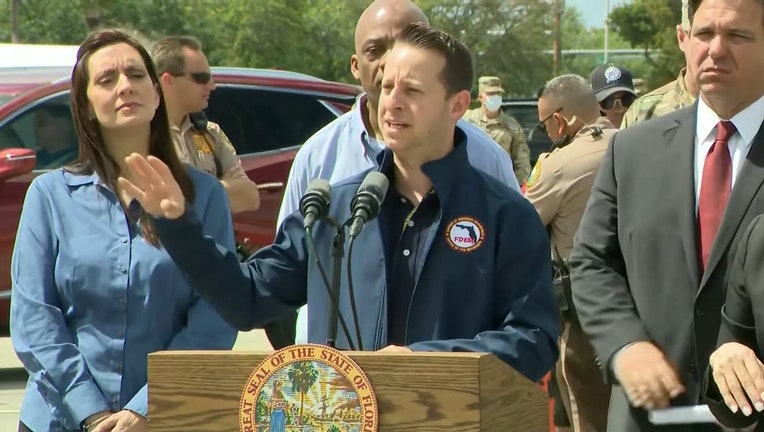 Jared Moskowitz, the director of Florida's Division of Emergency Management, speaks during a press conference on Sunday, March 22.

MIAMI GARDENS, Fla. - During a Sunday press conference at Hard Rock Stadium, where the National Guard opened a drive-thru testing site, the director of Florida's Division of Emergency Management made a plea to the "young people" as the country and state try to curtail the spread of COVID-19.

Below is a transcript of Moskowitz's speech:

"I want to talk about social distancing. There's a lot of different articles out there of what to do, what not to do -- a lot of things being studied, but the one thing that we know for sure is that social distancing works. Even if something is open still, it doesn't mean you have to go to it.

You can be a hero. Now is the time for everyone to step up. This doesn't matter who you are…it effects everybody -- but it effects older people more. We want everybody to do whatever they can to try and help their neighbor and help the older population."

Last week, all beaches in Pinellas County and Tampa were ordered to shut down. On the east coast, Flager County is temporarily closing its beaches.

Officials in Manatee and Sarasota counties decided to close their beaches too.

Dozens soaked up the sun along Gandy Beach despite an order from the city closing it down.

Meanwhile, beaches in Brevard -- where Cocoa Beach is located -- and Volusia County -- where Daytona Beach and New Smyrna Beach are located -- will remain open.

The University of Tampa announced six students tested positive for coronavirus. Five of the students were traveling together during spring break. School officials did not say where they went. One of the students didn't return to the school, but the other five self-isolating on campus.

The University of South Florida also announced a student from the St. Petersburg campus tested positive for coronavirus.

Beyond Florida, and from France to Australia, kitesurfers, college students and others crowd the beaches.

Their defiance of lockdown mandates and scientific advice to fight the coronavirus pandemic has prompted crackdowns by authorities on people trying to escape cabin fever brought on by virus restrictions. In some cases, the virus rebels resist — threatening police as officials express outrage over public gatherings that could spread the virus.

“Some consider they’re little heroes when they break the rules,” French Interior Minister Christophe Castaner said. “Well, no. You’re an imbecile, and especially a threat to yourself.”

After days of noncompliance by people refusing to stay home and venture out only for essential tasks, France on Friday sent security forces into train stations to prevent people from traveling to their vacation homes, potentially carrying the virus to the countryside or beaches where medical facilities are less robust. The popular Paris walkway along the Seine River was closed and a nightly curfew was imposed in the French Mediterranean city of Nice by Mayor Christian Estrosi, who is infected with the virus.

Australia closed Sydney’s famous Bondi Beach after police were outraged at pictures of the crowds.

New York Gov. Andrew Cuomo said Saturday that people from 18-to-49 account for more than half of the state’s coronavirus cases, warning them “you’re not Superman, and you’re not Superwoman.”