The F-150 Lightning will begin shipping to customers across the country following its April 26 launch at its Dearborn factory, the company announced in a release this morning. The new model represents the culmination of a company-wide shift toward electric vehicles as the industry's biggest automakers pivot toward battery-powered cars and trucks.

It will be manufactured at Ford's Rouge Electric Vehicle Center.

"Today we celebrate the Model T moment for the 21st Century at the Rouge Electric Vehicle Center," said Ford Executive Chair Bill Ford. "The Rouge is where Ford perfected the moving assembly line, making it a fitting backdrop as we make history again. The stunning anticipation for F-150 Lightning is a credit to the work of our Ford engineers and designers, and the UAW team members who are building these trucks with pride."

Ford will officially discuss the shipping of the Lightning at the company's world headquarters in Dearborn. The press conference will begin at 1:30 p.m.

According to Ford, the EV F-150 is "drawing interest from customers of competitor brands at a record rate." The company also said three of every four reservations among new Ford customers are made for the electric vehicle.

"America’s real transition to electric vehicles starts now," said Ford President and CEO Jim Farley. "F-150 Lightning is just the beginning of our ambitions for growth and leadership in digital, electric vehicles. We continue to expand our EV manufacturing footprint across the U.S., including the start of site preparation at BlueOval City, which will allow us to meet the ever-increasing customer demand for our exciting EV line-up." 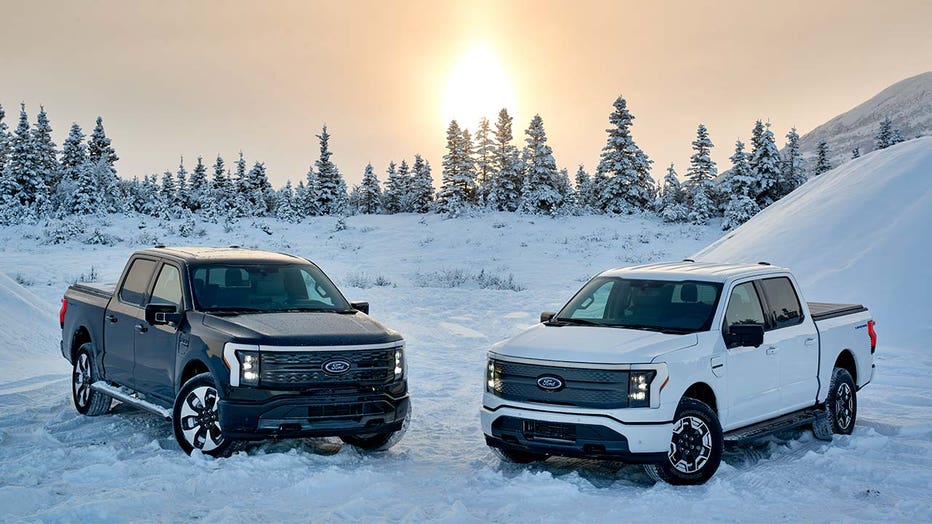 Estimates from the company say Ford is on track to deliver 2 million electric vehicles a year by 2026.

While electric vehicles still make up a tiny percentage of cars sold in the U.S., many experts believe it's the production of well-known models like Ford's pickup truck that will be necessary if battery-powered cars are to gain traction in the market.

It's likely a reason that President Joe Biden was so excited when he took the new truck for a spin.

"This sucker's quick," he said during the test drive.

To balance the gas and battery-powered markets, Ford is splitting its company into two separate divisions: Ford Blue and Ford Model e.

In addition to the reveal date, the prices of the models were also listed on Ford's website: