The flames tore through chapparal-covered hillsides, threatening some of L.A.'s most beloved open spaces and iconic landmarks, including the Getty Center.

LOS ANGELES - The Getty Fire, which sprung up along the west side of Interstate 405 in the Sepulveda Pass that stretches over the Santa Monica Mountains early Monday morning, exploded in size in a matter of hours, threatening beloved open spaces and iconic Los Angeles landmarks such as the Getty Center.

During a noon press briefing, the Los Angeles Fire Department announced that the blaze had reached 618 acres, and an official evacuation map from LAFD can be viewed here. 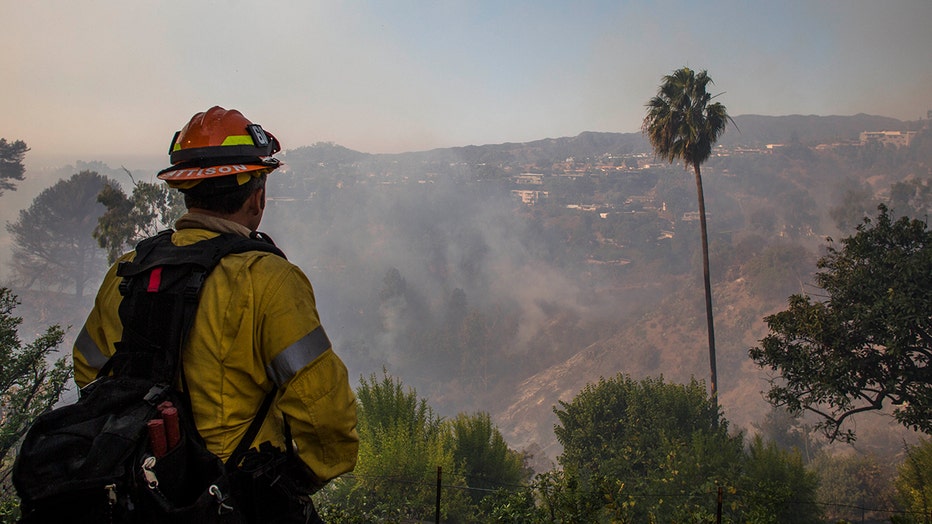 Firefighters battle the Getty Fire in a residential area of Brentwood, California on October 28, 2019. (APU GOMES/AFP via Getty Images)

The Getty Center is in the mandatory evacuation area, prompting many people to express concern about the potential threat to the invaluable collections within its walls.

The Getty Center is a large, six-building complex in the Brentwood neighborhood which houses extensive collections of European paintings, sculpture, drawings, illuminated manuscripts, decorative arts from the Middle Ages through the 20th century and international photographs dating from the late 1830s onward.

The Getty Center was opened in 1997, and construction of the $1 billion complex was funded by the massive endowment left by J. Paul Getty following his death.

Getty earned his fortune as an American oil tycoon, and, though frugal, he collected art for much of his life. Before he died, he chose to leave one-third of his massive fortune to the J. Paul Getty Museum.

Among the artwork inside are masterpieces such as Vincent van Gogh’s ‘Irises,’ which he painted during the last year of his life after checking himself into an asylum in France. Hanging in the same room is one of Pierre-Auguste Renoir’s most well-known and beloved paintings, ‘La Promenade.’

The fire started Monday near the Getty Center, and at 8 a.m., the J. Paul Getty Museum Twitter account posted eerie images of smoke-filled skies behind the museum as the sun rose, writing, “Many have asked about the art—it is protected by state-of-the-art technology. The safest place for the art and library collections is inside.”

Less than two years ago in December of 2017, the Skirball Fire tore through much the same area in the Sepulveda Pass, but to the east of the 405 Freeway instead. 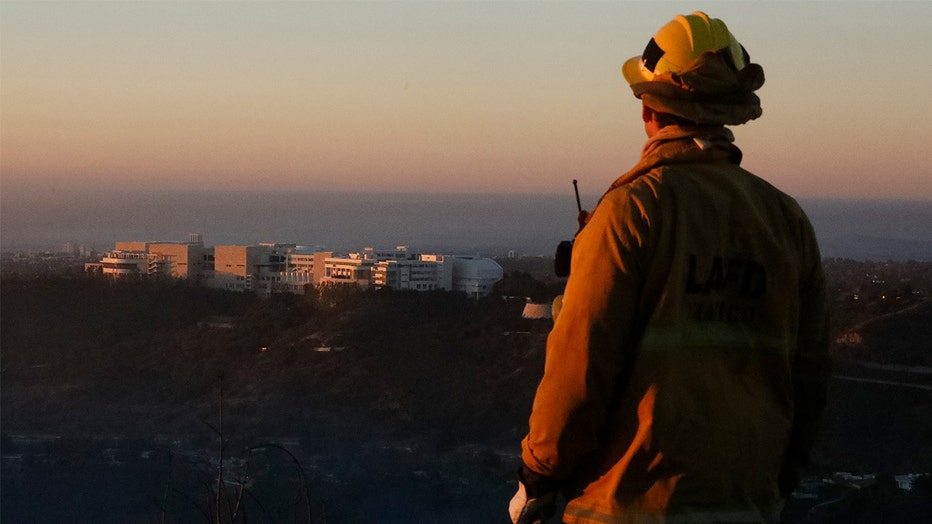 Firefighter Bobby D'Amico looks out over the Getty Center while monitoring the scene over Bel-Air where the Skirball fire destroyed homes on December 7, 2017. The Getty Fire now threatens the Getty Center once more. (Genaro Molina/Los Angeles Times v

People feared for the safety of the Getty Center and its collections during the Skirball Fire, too, but Ron Hartwig, then-vice president of communications for the Getty, told Smithsonian.com that the museum was designed to withstand disasters.

“We have to credit the architectural team that realized the Getty was being built in an area that would be hard to reach and was in a native habitat prone to fire,” Hartwig said. “When they designed the building they knew there would need to be a way to protect the art collection and having a very sophisticated air movement system was a key to that.”

The sophisticated air-filtration system forces air out of the buildings to protect against rising ash and smoke, but the landscape outside of the museum was also crafted to protect the works within. The campus is surrounded by water-rich plants that don’t easily burn, the museum facilitates intensive ongoing brush clearance, and Hartwig said the facility has “a million gallon tank of water that’s available for our use should we need to have water.”

The Getty Villa, a separate museum on an ocean-view bluff overlooking Santa Monica Bay, is also said to be safe.

Mt. Saint Mary’s Chalon Campus in Brentwood was evacuated in the early hours of Monday morning. The gorgeous campus has been used as a filming location for television shows and movies, including the film “Death Becomes Her,” starring Meryl Streep and Goldie Hawn, and episodes of “The O.C.” and “Modern Family.”

To the west of Mt. Saint Mary’s Chalon campus are vast stretches of popular hiking trails encompassed in Mandeville Canyon Park, Sullivan Canyon Park and Will Rogers State Historic Park to the southwest, as well as Topanga State Park to the north. For many Angelinos who take any and every opportunity to soak up the southern California sun, these parks are invaluable public spaces.

Will Rogers was one of the most popular and well-paid actors in Hollywood in the 1930’s. After his untimely death in 1935, his widow donated Rogers’ 359-acre ranch property overlooking the Pacific Ocean in what is now known as the Pacific Palisades to California State Parks. In 1944, the property became a state historic park.

The entirety of Will Rogers State Park is now under the mandatory evacuation area.

Farther to the west in the Pacific Palisades, one of Los Angeles’s greatest architectural gems, the Eames House, shut it’s doors and cancelled all tours due to evacuation warnings as the blaze continues to burn west.

The Getty Center has become a makeshift operating station for firefighters, who are keeping watch on the blaze from the restaurant terrace.

The spread of the Getty Fire has slowed due to moist ocean air replacing the dry offshore gusts which caused the fire to explode in a matter of hours overnight, but Santa Ana winds are forecast to return Tuesday night.