Wedel-Morales, 24, a native of Sapulpa, Okla., was last seen driving his personal vehicle outside of Fort Hood in Killeen on the night of Aug. 19, 2019.

KILLEEN, Texas - Fort Hood announced Wednesday that PV2 Gregory Wedel-Morales has been reinstated to active duty. According to the military post, the change in his status entitles him to burial with full military honors.

His mother Kim Wedel said Tuesday night that she had been notified that the U.S. Army will be reinstating her son based on new evidence. “This is just a relief that he’s not going to be remembered as a deserter. That he gets what he deserves and what he earned,” she said.

Fort Hood said in a release that Wedel-Morales's status was administratively changed based on "trustworthy investigative updates into his disappearance in coordination with investigators."

“While no words or gestures can make up for the loss of a family member, friend, or fellow Soldier like Gregory Morales, we hope that this news will comfort his family and the friends he served with in this time of terrible grief,” said Maj. Gen. Jeffery Broadwater, commanding general of the 1st Cavalry Division.

Fort Hood says the unit remains in contact with Wedel-Morales' family to ensure they receive the support they need and are entitled to and with the civilian authorities.

Family members say because he wasn’t a deserter, he should receive a proper military funeral.

Wedel-Morales, 24, a native of Sapulpa, Okla., was last seen driving his personal vehicle outside of Fort Hood in Killeen on the night of Aug. 19, 2019. His last known contact was the following day.

His unit placed him in an AWOL status and then declared him a deserter. His mother pleaded with U.S. Army officials. She knew something was wrong, saying “that wasn’t Greg.” 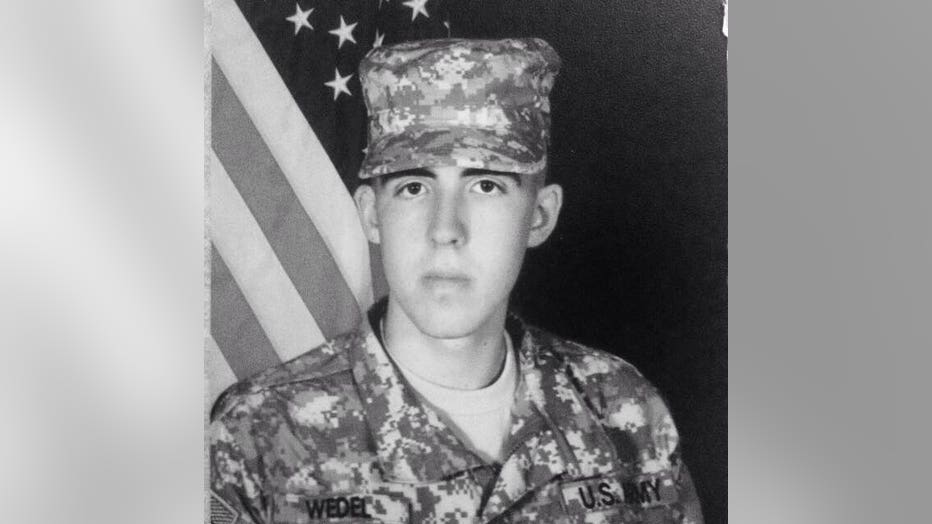 Wedel-Morales “was out processing from the Army and was scheduled to be discharged within a couple of days when he disappeared,” III Corps and Ford Hood said in a Facebook update on June 21.

Kim Wedel, the mother of Private Second-Class Gregory Wedel-Morales tells FOX 7 Austin the remains have been identified as his.

His 2018 black KIA Rio was recovered by authorities in January after his family saw on CARFAX that someone in the Dallas area had tried to take it in for an inspection and his remains were found in Killeen in June, and investigators suspect foul play. Family members say because he wasn’t a deserter, he should receive a proper military funeral. His cousin Abigail Wimberly started a petition to get Wedel-Morales reinstated so he could be buried with military honors.

Wedel-Morales grew up in a large military family in Oklahoma. His mother says deserter status “devastated” them. “His grandfather retired as a major in the military and this has really been hard on him, that the world would believe that his grandson's a deserter. None of [my children] were brought up to ever just run away from problems," she said.

The family has been fighting for Wedel-Morales’ reinstatement. On Tuesday night, a Fort Hood colonel called Wedel and said it would happen. She was told the Killeen Police Department found new evidence indicating her son died before he was “dropped from rolls,” or deemed a deserter.

On June 21, CID also confirmed the remains to be that of Wedel-Morales and announced that foul play is suspected at this point in the investigation.

Almost a year after Wedel-Morales' disappearance, his family can finally begin making funeral arrangements. Wedel says they will bring him home to Sapulpa for a funeral with family and friends. Then once the paperwork is done and Wedel-Morales is formally reinstated, he will be transferred to Fort Gibson for a military funeral.

“It's extremely hurtful that they just didn’t believe us to start with and that we’ve had to even fight this battle. It’s, you feel like you’ve won something but you don’t feel any of the joy of winning for whatever it is. I mean, in the end, he’s still gone.” said Wedel.

Wedel, who started a petition to change the way the U.S. Army classifies soldiers as AWOL, says this is just the beginning of her fight.

Kim Wedel, the mother of missing soldier Gregory Wedel-Morales, joins Mike Warren on FOX 7 Austin to talk about her petition to change the protocol for declaring a soldier AWOL.

“I just want everybody to remember him for the good guy he was. The friendly guy, the goofy guy. The fact that he was everybody’s friend and I need them to be his… Greg would definitely want us to keep the fight alive so that he’s not forgotten. Greg would want me to try to step out and help other people so that’s what I’m gonna try to do.”

Morales joined the Army in June 2015 as a motor transport operator and had been assigned to the 1st Sustainment Brigade, 1st Cavalry Division at Fort Hood since November 2016, according to the Army.

A $25,000 reward is being offered for information about his death. Fort Hood says this incident remains under investigation by the Killeen Police Department.