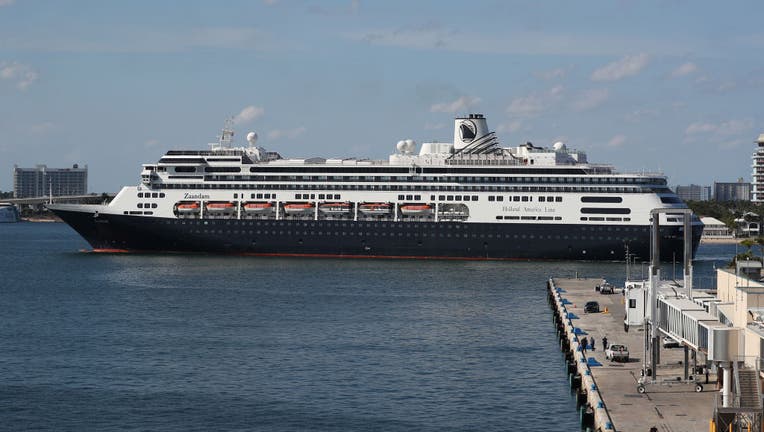 FORT LAUDERDALE, FLORIDA - APRIL 02: The Zaandam cruise ship pulls into Port Everglades on April 02, 2020 in Fort Lauderdale, Florida. The Holland America cruise ship had been at sea for the past 19 days after South American ports denied their entry

Holland America Line said it will use its cruise ship Volendam to accommodate Ukrainian refugees as part of an agreement between the Netherlands and Rotterdam city officials.

Authorities say the ship will dock in Rotterdam for three months and will provide a temporary home for nearly 1,500 Ukrainians as part of the country’s larger commitment to accept 50,000 people who fled the war in their homeland.

Guests will be provided three hot meals a day, rooms, housekeeping services and other amenities. The cruise ship will be staffed with 650 crew members.

"We are in a unique position to accommodate the immediate need for food and housing, so we felt it was very important to work with the City of Rotterdam and charter this ship," Gus Antorcha, president, Holland America Line, said on the company’s website. "Our company was founded in Rotterdam around the mission of helping immigrants find a better life. So today we’re proud to be a small part of a similar mission for Ukrainians who have tragically been displaced."

Russia's assault on Ukrainian cities continued, including Russia's disputed claim to have taken control of its first major city, Kherson, and a strike on Ukraine's second-largest city, Kharkiv, that led one official to call Kharkiv "the Stalingrad of the 21st century." Slavic Gospel Association is providing help to local churches that are aiding Ukrainians in the war zone.

The company said Volendam was scheduled to go back into service on May 15, but that date has now been pushed back to July 3. Guests who had their reservations canceled will be accommodated, according to the company.

RELATED: Intel: Putin may cite Ukraine war to meddle in US politics

"We are very sorry for the inconvenience this will cause to guests booked on the three canceled cruises," Antorcha continued. "We hope they understand the unprecedented nature of this situation and why we felt it was important to work with the government on this initiative in support of these families in need."

The cruise ship will be docked at Merwehaven, a cargo port north of Rotterdam.

The number of people who have fled Ukraine since Russian troops invaded has surpassed 4 million, the United Nations reported last month. The U.N. children’s agency said that nearly two-thirds of all Ukrainian children have fled their homes in the six weeks since Russia’s invasion began, and the United Nations has verified that 142 children have been killed and 229 injured, though the actual numbers are likely much higher.

The mayor of the Ukrainian port city of Mariupol said Monday that more than 10,000 civilians have died in the Russian siege of his city, and that the death toll could surpass 20,000, with corpses that were "carpeted through the streets."

The mayor's comments emerged as Russia claimed that it destroyed several Ukrainian air-defense systems in what appeared to be a renewed push to gain air superiority and take out weapons Kyiv has described as crucial ahead of an expected broad new offensive in the east.

Ukrainian President Volodymyr Zelenskyy pleaded for more Western aid, saying his forces need heavier firepower to resist the coming onslaught and push Russian forces back. Echoing his remarks in an AP interview, Zelenskyy said Sunday that the coming week could be crucial and that Western support — or the lack thereof — may prove decisive.

"To be honest, whether we will be able to (survive) depends on this," Zelenskyy said in a "60 Minutes" interview. "Unfortunately, I don’t have the confidence that we will be receiving everything we need." In a video address to South Korean lawmakers on Monday, he specifically requested equipment that can shoot down Russian missiles.