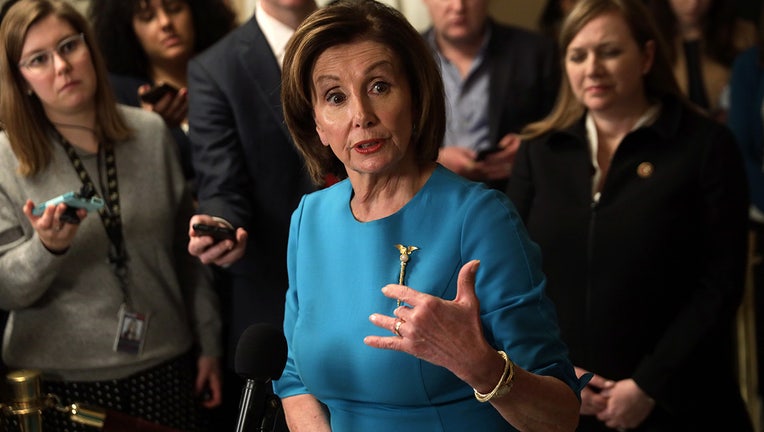 U.S. Speaker of the House Rep. Nancy Pelosi (D-CA) speaks to members of the media at the U.S. Capitol March 13, 2020 in Washington, DC. (Alex Wong/Getty Images)

All House Democrats supported the plan while Rep. Justin Amash, an independent from Michigan who is a former Republican, voted "present."

President Trump said Friday night that he supported the package -- in an apparent effort to get skeptical House Republicans on board with the legislation.

"I fully support H.R. 6201: Families First CoronaVirus Response Act, which will be voted on in the House this evening," Trump tweeted. "This Bill will follow my direction for free CoronaVirus tests, and paid sick leave for our impacted American workers ..."

"I encourage all Republicans and Democrats to come together and VOTE YES!" Trump later added. "I will always put the health and well-being of Americans FIRST. Look forward to signing the final bill, ASAP!"

Pelosi initially informed colleagues of a deal with the Trump administration at around 6 p.m. ET. “We are proud to have reached an agreement with the administration to resolve outstanding challenges, and now will soon pass the Families First Coronavirus Response Act,” the California Democrat said in a letter.

However, Fox News later learned that Mnuchin had not yet signed off on the pact.

Shortly before 8 p.m. ET, Mnuchin told Fox Business Network's "Lou Dobbs Tonight": "We have an agreement that reflects what the president talked about in his speech the other [Wednesday] night. He's very focused on making sure that we can deal with the coronavirus, that people who have to be home quarantined -- that hard-working Americans don't lose their compensation because they have to be home quarantined.

"Obviously we expect the bigger corporations to pick up these costs," Mnuchin added, "and we also want to make sure that people can get free testing. The president wants lots of testing. One of the things the market responded very positively to was [that] the president has made just enormous progress with all these big companies coming in and saying that there's testing."

The apparent problems caught Democrats by surprise: House Majority Leader Steny Hoyer, D-Md., said “we thought we had an agreement,” adding: “I want to vote tonight.”

Fox News is told the major objection to the bill from House Republicans has been extraneous matters House Democrats kept trying to include in the coronavirus package.

The timing of a potential Friday night vote was not clear. Shortly before 10 p.m., Pelosi informed her Democratic caucus that the "process has taken some time," adding that “language incorporating the last details into the text is currently being written and should be completed soon.”

Sources told Fox that if the measure passes the House with an overwhelming majority, the Senate will take it up next week.

According to Pelosi, the bill includes paid emergency leave with two weeks of paid sick leave and up to three months of paid family and medical leave. “We have also secured enhanced unemployment insurance, a step that will extend protections to furloughed workers,” she said.

Pelosi also said the bill will include nutrition security initiatives “including SNAP, student meals, seniors’ nutrition and food banks.” The Democrat said “22 million children rely on free or reduced-price school meals for their food security; we must ensure that they have food to eat.”

She also said the bill will include increased federal funds for Medicaid to support local, state, tribal and territorial governments and health systems “so that they have the resources necessary to combat this crisis.”

The revisions to the Democratic bill happened after the GOP flagged “major” concerns about the sick leave legislation on Thursday. House Minority Leader Kevin McCarthy, R-Calif., criticized the initial legislation for creating a paid sick leave program through the Social Security Administration that he said would take six months to set up and hamper the agency’s normal functioning of disbursing checks to senior citizens.

He also objected to forcing permanent paid sick leave "for all businesses without exemptions and no sunsets," McCarthy said.

Late Friday, McCarthy told reporters the bill "had some things which needed to be cleaned up."

"This is a really good sign that shows bipartisanship, that we can overcome this virus," he said. " ... It was very important to get this done before anybody departed."

Trump had pressed for a payroll tax holiday to give some economic relief to Americans, but Pelosi has not included that in this bill, though she's signaled more legislation could be needed as the scope and hurt of the pandemic is fully realized.