AUSTIN, Texas - Hundreds of protesters rallied at the Capitol in opposition of Governor Greg Abbott signing Senate Bill 8 into law.

SB 8, also known as the Heartbeat Bill, prohibits abortion once a heartbeat is detected before many women realize they are pregnant.

"This is before many people even know that they're pregnant which means they could take away our decision before we even know we have a decision to make about our own bodies in our own life. Is this okay? No!" said Amanda Williams, Executive Director for the Lilith Fund.

The rally named "Don't Mess With Texans’ Abortions" started at the State Capitol and led to a march down Congress Avenue towards the Governor's Mansion. 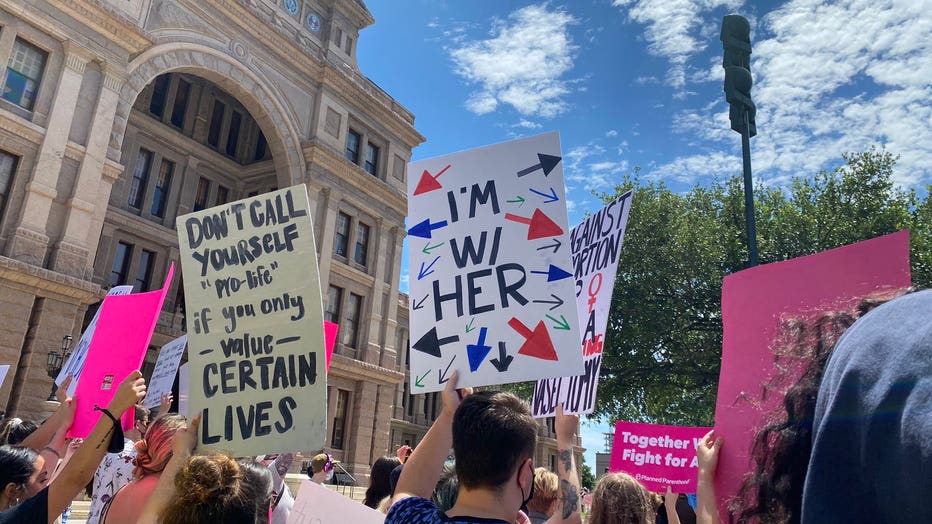 The crowd included a mix of people from both the younger and older generation with a common goal of making it clear that they do not support the state’s attempt at abortion restrictions.

"It's empowering to feel a sense of community and to know that, you know, we are in this together and we're going to fight this," said Renee Kreisner, pro-choice.

The crowd included a mix of people from both the younger and older generation with a common goal of making it clear that they do not support the state’s attempt at abortion restrictions.

"We're both mothers, and we're both here for the right reason today, to help keep women safe, and make sure that abortion is an option for them. If that's a choice that they need to make, that's between them and their doctor," said Kreisner.

SB8 is a new attempt to restrict abortions in Texas. It makes a heartbeat of an unborn child as the new standard.

However, not everyone chanting at the Capitol was pro-choice. Groups like Students for Life Action say they support the Governor signing SB 8 into law.

"This will protect the pre-born from the harm of abortion and protect women from the heartbreak that it causes them," said Rachel Schroder, Texas State Captain for Students for Life Action.

The Heartbeat Bill is supposed to go into law on September 1.

"This is a decision that is meant to be up to the person making the decision and should not be intervened by a politician," said Williams.