Severe storms to slam the Plains on Monday

Heavy rain and severe weather are expected to slam part of the southern Plains on Monday.

Weather ingredients, including energy from Hurricane Roslyn in the Pacific, will join forces over the southern parts of the country during the first half of the workweek to produce heavy rains and the chance for severe storms.

Roslyn will not be a trackable entity, but its limited moisture and upper-level energy will stream northeastward after impacting Mexico as a major hurricane.

The first rains will kick off on Monday in Texas and the southern Plains before moving eastward into the Mississippi Valley.

The severe weather threat is expected to increase on Tuesday with a greater likelihood of damaging winds and a tornado threat. 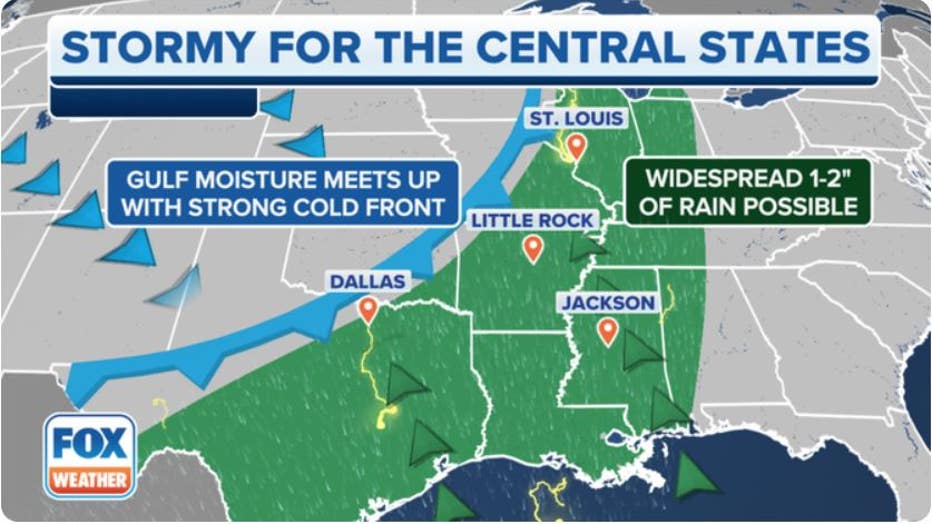 Aside from the storms, the FOX Forecast Center will be monitoring threats for heavy rainfall and flash flooding.

A widespread area of 1-2" of rain with isolated totals up to 6" is possible from the Ark-La-Tex region into southern Missouri.

The rainfall will be beneficial to many communities that are experiencing drought conditions, but flooding will be possible if too much rain falls in a short period of time. 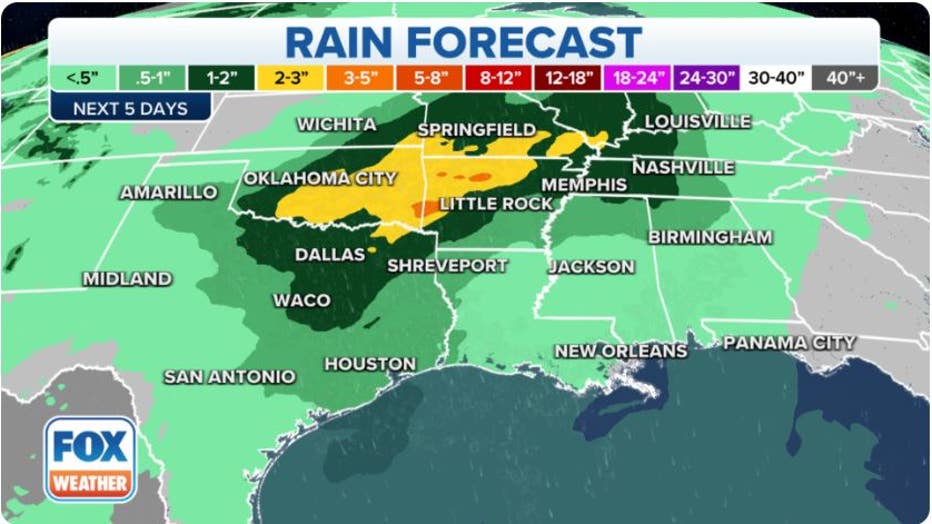 HOW BAD WILL WINTER BE? NOAA PREDICTS LA NINA WILL PLAY ROLE IN SEASON’S WEATHER FOR 3RD STRAIGHT WINTER

The FOX Forecast Center expects rain to first develop over Texas and Oklahoma on Monday morning. By the afternoon, moisture could stretch along the cold front from Missouri to the Lone Star State.

The SPC believes the threat of stronger thunderstorms will become more pronounced during the evening and possibly into the overnight hours as storms develop in central and eastern Texas. 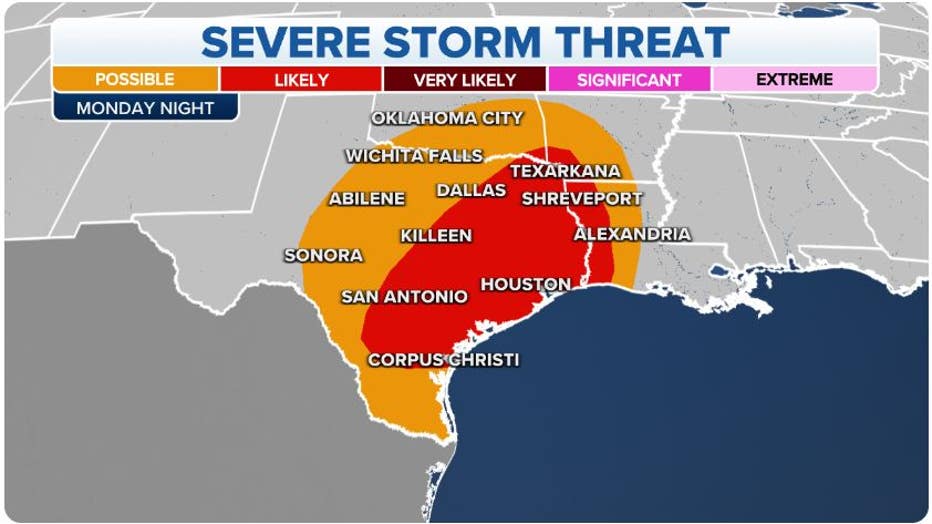 Cities such as San Antonio, Austin and Waco are included in the possible severe storm zone.

"It’s quite possible along I-35 from Waco all the way down towards Corpus Christi and west of Houston, that possibility of severe weather will exist," FOX Weather meteorologist Kiyana Lewis said.

WHEN IS THE TYPICAL LAST HURRICANE STRIKE ON THE US COAST?

The rain will push eastward on Tuesday and will produce its most significant expected impacts. Heavy rainfall will quickly accumulate in eastern Oklahoma, northeast Texas, southern Missouri and Arkansas.

Isolated communities could see upwards of half a foot of rain, leading to flooding in poor drainage areas.

The threat for storms with damaging winds and tornadoes will exist east of where the heaviest rain falls. 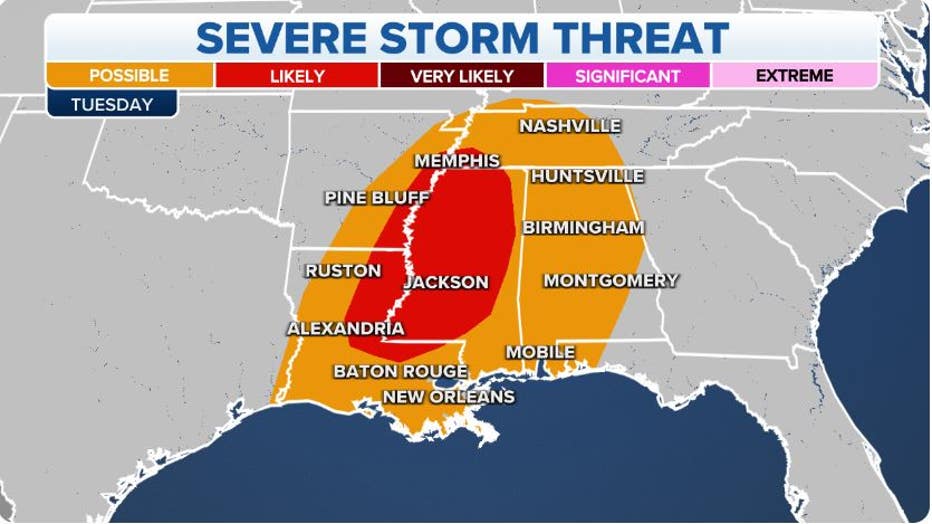 The FOX Forecast Center expects shear levels to be very conducive for severe weather, but a lack of instability could be an inhibiting factor.

The expected threat for severe storms stretches from southern Kentucky and Missouri on the northern periphery to Louisiana, Mississippi and Alabama along the Gulf Coast.

SALTWATER CREEPING UP MISSISSIPPI RIVER AMID LOWEST LEVELS IN A DECADE

Nearly 95 percent of the region is experiencing drought conditions, with many communities seeing a rainfall deficit of more than 10 inches for the year.

The lack of precipitation has caused some tributaries of the Mississippi River to dry up, and a nearly 400-mile stretch of the waterway is at extremely low levels.

By Wednesday, some areas that desperately need the rain will have picked up several inches of precipitation. 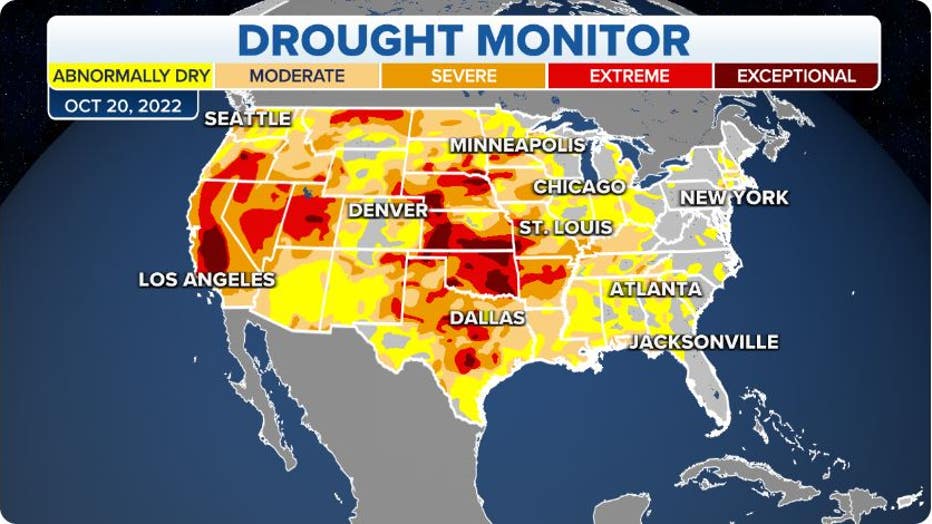 "This rainfall will come in handy because a lot of these areas are dealing with exceptional drought conditions and will lead to some improvement," Lewis said.

The FOX Forecast Center said the rain would not be enough to restore river legvels, but it will likely stop the waterline from dropping further.

After the early workweek system heads eastward, the next best chance of rain isn't expected to approach until the end of the week.