The world’s largest iceberg just formed after breaking off from Antarctica, according to the European Space Agency.

Dubbed A-76, the iceberg calved off the Western side of the Ronne Ice Shelf, lying in the Weddell Sea, according to the ESA. 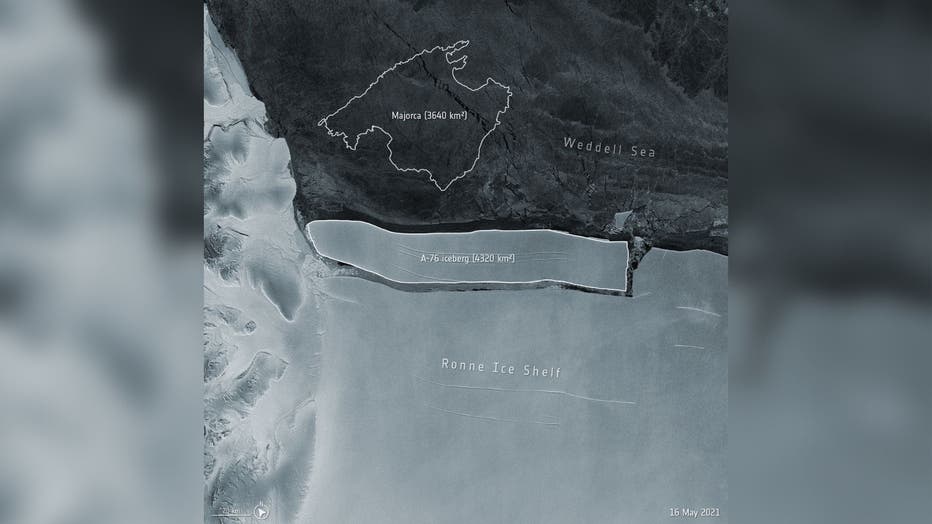 A-76 after breaking off of Ronne Ice Shelf in Antarctica.

Iceberg calving is a natural and important step to the life of Earth’s ice sheets and takes immense amounts of time to happen, according to the Centre for Polar Observation and Modeling.

"Rates of calving often change annually, with calving slowing or shutting down entirely over the winter. Many different environmental factors such as melting of the glacier surface, undercutting of the calving face by warm fjord water or the resistance from sea ice in fjords combine to promote or prohibit calving," CPOM said.

A-76 was able to nab first place for the world’s largest iceberg just ahead of A-23A which was about 1498 sq. miles in size and also located in the Weddell Sea.

The iceberg was first spotted by British Antarctic Survey and confirmed by the US National Ice Center, according to CPOM.

While the ESA did not say whether or not climate change had anything to do with A-76 breaking off the ice shelf, evidence does suggest Earth’s changing climate is to blame for other ice formations melting at alarmingly high rates.

Glaciers are losing 31% more snow and ice per year than they did 15 years earlier, according to three-dimensional satellite measurements of all the world’s mountain glaciers taken in April.

Using 20 years of recently declassified satellite data, scientists calculated that the world’s 220,000 mountain glaciers are losing more than 328 billion tons (298 billion metric tons) of ice and snow per year since 2015, according to a study in Wednesday’s journal Nature. That’s enough melt flowing into the world’s rising oceans to put Switzerland under almost 24 feet (7.2 meters) of water each year.

The annual melt rate from 2015 to 2019 is 78 billion more tons (71 billion metric tons) a year than it was from 2000 to 2004. Global thinning rates, different than volume of water lost, doubled in the last 20 years and "that’s enormous," said Romain Hugonnet, a glaciologist at ETH Zurich and the University of Toulouse in France who led the study.

Half the world’s glacial loss is coming from the United States and Canada.

The near-uniform melting "mirrors the global increase in temperature" and is from the burning of coal, oil and gas, Hugonnet said. Some smaller glaciers are disappearing entirely. Two years ago, scientists, activists and government officials in Iceland held a funeral for a small glacier.

"Ten years ago, we were saying that the glaciers are the indicator of climate change, but now actually they’ve become a memorial of the climate crisis," said World Glacier Monitoring Service Director Michael Zemp, who wasn’t part of the study.