AUSTIN, Texas - Two migrants currently living in Austin churches are breathing a sigh of relief, after federal officials Monday allowed them to stay in the United States for another year. They both came to the U.S. a year ago—after escaping violence in Central America. Since then, they’ve made their home in so-called "sanctuary churches" to avoid deportation, with the help of the Austin Sanctuary Network.

FOX 7 Austin met Hilda Ramirez and Alirio Gamez a year ago—when they were granted their first stay from deportation at the J.J. Pickle Federal Building in Austin. That meant they could physically go outside the churches they were living in for the first time, without fear of arrest. However, that ruling was set to expire Monday.

That’s why Ramirez and Gamez were back at the Federal Building Monday. They walked out of the building relieved to avoid the threat of deportation for the next 365 days—thanks to deferred action granted by ICE officials. Ramirez and Gamez expressed their gratitude to the Austin Sanctuary Network—which has allowed them to live in local churches while they try to obtain permanent residency.

"It just feels so glorious to know that they have another year of freedom. And this time around, unlike the previous year, they will be allowed to get work permits," said Peggy Morton, board president with the Austin Sanctuary Network.

Ramirez told me she is "very happy" for the stop to her deportation, adding she is glad to be able to go outside to "walk and visit my friends." 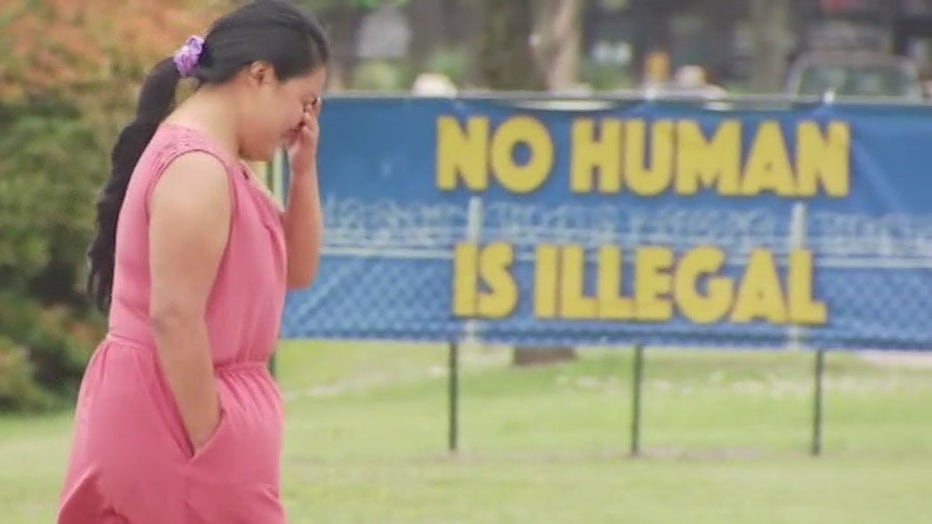 Hilda Ramirez has been raising her son Ivan while living in St. Andrews Presbyterian Church in North Austin for a year.

Ramirez has been living at St. Andrew’s Presbyterian Church in North Austin for more than six years now. She describes her life there as "bonito y triste"—beautiful and sad. Ramirez fled to the US to escape violence in her home country of Guatemala.

Inside St. Andrews, Ramirez showed us where she sleeps at night, and the room where she does her laundry and helps wash towels for the homeless. She also spends a great deal of time in the food pantry, where she helps pack and distribute food with her son Ivan—who came to the US with her.

"They deserve freedom. They are a part of our community," said Morton.

For Ramirez, the ability to apply for a work permit is an important step in that direction, saying she might look for work at H-E-B.

Her son, who is now 16, is on his way to getting a green card. Ramirez says she’s grateful for the freedom to see him "in the school and the soccer games."

While another year of freedom from deportation is a huge relief for Ramirez and Gamez, they’re still working toward a long-term solution.

I asked Ramirez what a permanent life in America would look like. Speaking in Spanish, she says she would like to be "working, have a house, and be happy with my son."

"They not only want to free themselves, but they would like to see other immigrants who are just like them that have been working in this country for 10, 20 years. And it's time we recognize everyone's humanity," said Morton.

Ramirez is currently part of a federal lawsuit over hefty fines she and other immigrants received during the Trump administration. The Austin Sanctuary Network claims those fines stemmed from improper surveillance by ICE, while she and others were living in churches. The federal government has since waived the fines, but the lawsuit is still ongoing.