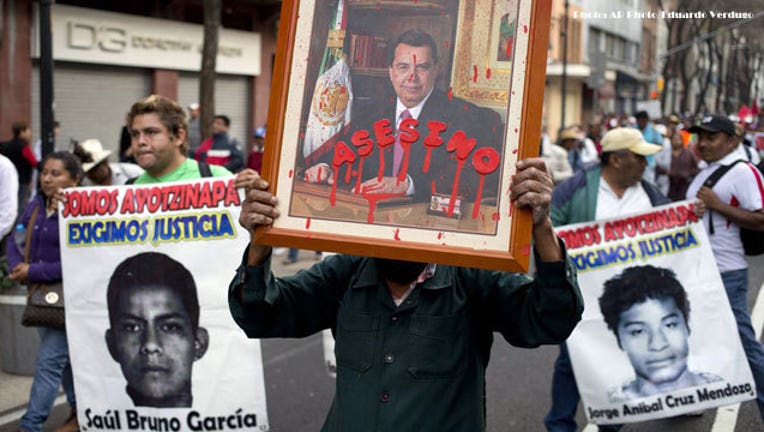 MEXICO CITY (AP) — An independent report presented Sunday dismantles the Mexican government's investigation into last year's disappearance of 43 teachers' college students, starting with the assertion that the giant funeral pyre in which the attorney general said they were burned to ash beyond identification simply never happened.

While the government said the Sept. 26 attack was a case of mistaken identity, the report said the violent and coordinated reaction to the students, who were hijacking buses for transportation to a demonstration, may have had to do with them unknowingly interfering with a drug shipment on one of the buses. Iguala, the city in southern Guerrero state where that attacks took place, is known as a transport hub for heroin going to the United States, particularly Chicago, some of it by bus, the report said.

"The business that moves the city of Iguala could explain such an extreme and violent reaction and the character of the massive attack," the experts said in the report delivered to the government and the students' families during a public presentation.

"It was the state!" some members of the audience shouted.

The report means that nearly a year after the disappearance, the fate of 42 of the students remains a mystery, given the errors, omissions and false conclusions outlined in more than 400 pages by the experts assembled by the Inter-American Human Rights Commission. The team interviewed witnesses and detainees and reviewed the government's evidence and conclusions. A charred bone fragment of only one of the 43 has been identified and it wasn't burned at the high temperature of an incineration, contrary to Mexican investigators' claims.

The report recommends that authorities rethink their assumptions and lines of investigation, as well as continue the search for the students and investigate the possible use of public or private ovens to cremate the bodies. It also recommends investigating the drug angle, who was coordinating the attacks and who were the high level people giving the orders — all unknowns nearly a year later.

In point after point, the international team of experts, including lawyers, former prosecutors and a medical doctor, says the government investigation was wrong about the nature of and the motive for the attacks. It is an indictment of Mexico's investigative procedures and conclusions, and cites key evidence that was manipulated or that disappeared.

Federal police and military were aware of the attacks and present at some of the crime scenes, according to the report. While their involvement is unclear, at the very least they failed to intervene to stop widespread shooting of unarmed civilians.

"This report provides an utterly damning indictment of Mexico's handling of the worst human rights atrocity in recent memory," Jose Miguel Vivanco, Americas director at Human Rights Watch, said in a statement Sunday. "Even with the world watching and with substantial resources at hand, the authorities proved unable or unwilling to conduct a serious investigation."

The attack and disappearance of the 43 at the hands of officials became a pivotal moment in the administration of President Enrique Pena Nieto, which started fast out of the blocks three years ago with a series of key political and economic reforms. But the slow response to the case of the 43 and the implausibility of the government's version of the events sparked international outrage and eroded the credibility of Pena Nieto's government.

The parents of the victims, all young men and many in their first year of college, and various civic and human rights groups were outraged that the investigation was based on testimony of those arrested, many who complained of being tortured, and not on physical evidence. The report says the detainees gave four versions of what happened, including that the students were incinerated at a municipal garbage dump in the nearby city of Cocula and their ashes bagged and dumped in a river.

The group hired its own forensic expert to examine the garbage dump, who determined among other things that the fire needed to incinerate 43 bodies would have caused a forest fire in the heavily wooded zone and burned the whole area. The report said the local drug gang, Guerreros Unidos, neither had a history for carrying out such an orchestrated cremation nor the fuel available nearby.

"For all these reasons, we have come to the conviction that the young men were not incinerated in the Cocula garbage dump," said Francisco Cox, a Chilean lawyer on the team.

To date, authorities have detained more than 100 people, the majority of them local police. The former Iguala mayor, Jose Luis Abarca, is also in custody and has been identified with his wife as those who ordered the attack. The experts say that may be true but it's still not clear.

The case had such an impact that Pena Nieto mentioned it last week in his state of the union speech, acknowledging its role in Mexicans' disenchantment with and distrust of his government.

The night the students disappeared was characterized by hours of terror and coordinated attacks carried out by local police and ordered by an unknown command that violated the human rights of some 180 people, while state and federal authorities stood by, according to the report.

It documents how state and federal and police and the military were monitoring the movement of the students even before they arrived in Iguala, and stood by as Iguala and Cocula local police attacked them in nine different locations, killing six, including two who were shot a close range and three bystanders. Another 40 were injured, some gravely. Authorities and emergency medical crews took hours to respond, likely causing the deaths of at least two people as they awaited medical attention, the report says.

The attorney general portrayed the incident as a chaotic response from police working for the Guerreros Unidos who mistook the students for rival gang members.

But the experts say the alleged motive doesn't make sense, as the students were well known for their radical tactics, including hijacking buses for transportation. The report says a fifth bus that could have been carrying drugs or money was ignored in the attorney general's investigation, never examined and could be key to the reason for the attack.

"All that suggests that the action of the perpetrators was motivated by the students acting against high-level interests," the report said.