A viral video appearing to show an Indiana police officer kicking a dog while responding to a call has prompted his department to release bodycam footage Wednesday in hopes of clearing up "misinformation" about the incident circulating online.

"Yesterday evening while my family and I were at work, someone broke into my home. My dogs ran the intruder off," the user wrote alongside the clip. "This was the response shortly after a neighbor called. My home needed help and all it received was hurt."

The video shows a police officer walking up to a home and then directing kicks toward a barking dog. A Christmas tree display set up outside the home tumbles to the ground during the commotion – and after the dog scampers off, the officer knocks on the door of the residence and the video ends.

The Terre Haute Police Department said the sergeant involved in the incident has been placed on an administrative duty assignment pending an investigation, adding in a Facebook post Wednesday that the "conduct in the video has been determined by [a] prosecutor to not constitute a crime by the officer" and bodycam footage it released "is in sharp contrast to the original social media narrative."

"Based on this shared narrative and brief segment of video, we absolutely understand the perception and outrage expressed by many," it wrote. "While this investigation continues, there is some general information that we can provide to correct some of the misinformation being disseminated."

The department said it was summoned to the property Monday after receiving a call "complaining of an aggressive white pit bull" – not a burglary. 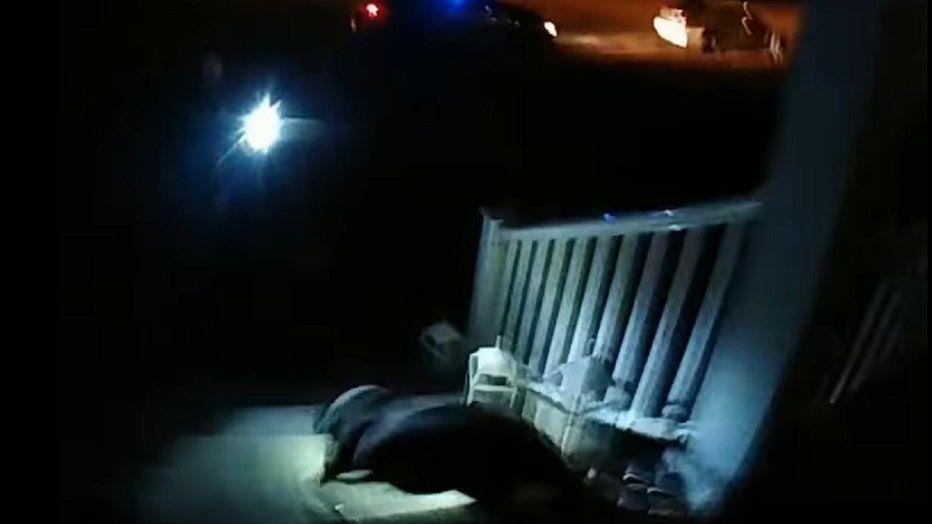 The brown dog is seen running away from the home in the officer's bodycam footage. (Terre Haute Police Department)

The caller indicated to dispatchers that the animal had "bitten a child" in the past, and the department, checking through its records, found a May 2020 incident in which they responded to the same address and cited an adult female for Failure to Restrain a Dog Resulting in Bite or Attack.

"Any claim that officers were responding to a reported burglary is untrue," the Terre Haute Police Department said.

The bodycam footage released by police shows two dogs – one brown and one white – barking and running at the police officer while he responds to the scene.

"Get away from me! Get away!" the officer is heard yelling at the dogs.

The footage then appears to show the officer trying to chase away the brown dog after it approached him another time.

Later on in the bodycam footage, the officer questions a neighbor before heading up to the porch where the Ring doorbell video sequence unfolded. 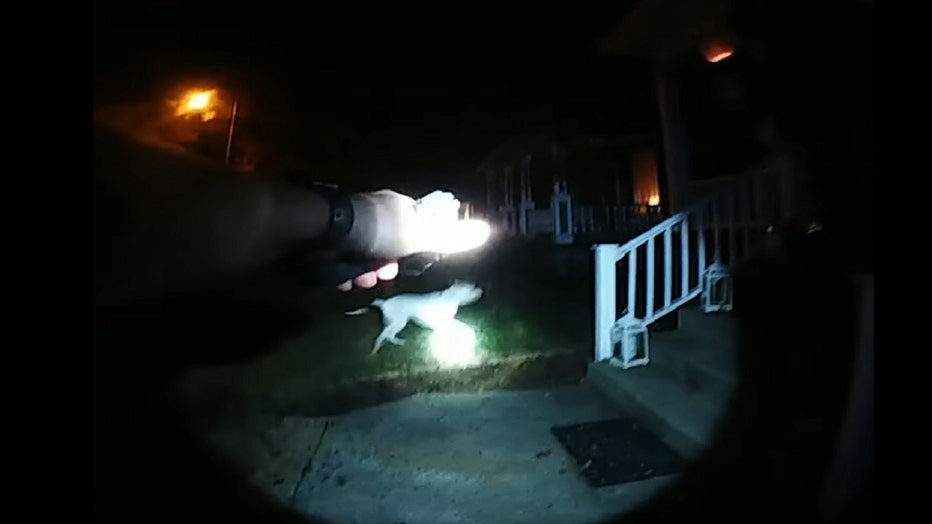 The officer is seen in another part of the bodycam footage gesturing for a white dog to back away from him. (Terre Haute Police Department)

"At 5 minutes and 52 seconds, the officer points out to a neighbor an opening in the fence where he believes the dogs got out from," the department said. "The rest of the body camera video depicts officers waiting for a male resident to arrive and officers speaking to him about the animals."

"During the video, the male was cited for 2 counts of non-immunized animal, 2 counts of dangerous animal prohibited, and 2 counts of animal restraint," it added, noting the full bodycam footage will be released by the Vigo County Prosecutor’s Office later today.

The department also said hours after their initial response that night, the "male resident contacted police again and reported that after speaking with his family, he believes someone may have gotten into their residence and that is how the dogs escaped."

"Nothing was reported missing at that time and no video was available depicting an intruder," the department continued. "This claim remains under investigation, but there are currently no witnesses or video indicating an intruder was present or that the dogs scared one off."

Investigators say they later contacted the male resident and asked him if he wished to make a complaint, "and he declined."