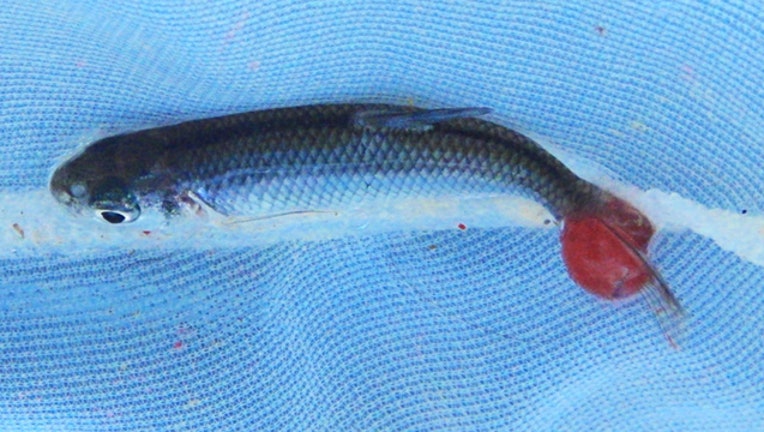 "Blood-filled blisters on the tail of a blacktail shiner one day after 30-minute exposure to snails shedding larvae of Haplorchis pumilio. Fish died on day 3." (Texas State University)

SAN MARCOS, Texas (FOX 7 Austin) - An invasive parasite that robs fish of the ability to swim and poses a potential threat to endangered species has been found in the San Marcos and Comal Rivers.

According to researchers at Texas State University, the invasive parasite could impact native fish, including endangered species unique to Texas springs.

The parasite, Haplorchis pumilio, has been studied by researchers since it's discovery in 2013.

“We’ve seen from experimental infections that the migrating larvae can rupture gall bladders, heart and other vital organs,” said Allison Scott, a graduate student working in the Huffman lab at Texas State. "One fish I examined had a cyst behind its eye. You could see a large amount of blood in the eye. If soft tissue is in the path of a migrating larva, it just drills right through it."

The source of the parasitic problem likely originates with an invasive Asian snail, identified by its distinctive spiral shell. The snail was likely was introduced into local springs through aquarium dumping by local residents, according to researchers. This snail is known to transmit more parasitic fluke diseases than any other snail in the world.

In Laos and Vietnam, where fish are commonly eaten raw, both parasites also cause intestinal disease in humans. "Fortunately, it is very unlikely that local humans are going to contract these parasites, because they cook their fish," said David Huffman, a parasitologist in the Department of Biology at Texas State who discovered the invasive parisite. "On the other hand, if there are cats or dogs that are visiting fish cleaning stations, then it could become a veterinary problem. I've already warned one of the vets here to be on the lookout for it."