An Iraqi translator who helped U.S. forces during the war in Iraq is finally safe in the United States after a decade-long battle by a U.S. Army veteran to keep his promise.

DALLAS - An Iraqi translator who helped U.S. forces during the war in Iraq is finally safe in the United States after a decade-long battle by a U.S. Army veteran to keep his promise.

For 11 years, government red tape, combined with the COVID-19 pandemic, has left a person who put his life on the line for America in hiding in the Middle East.

But that red tape has finally been broken.

It was a reunion years in the making.

"It's been a long time, yeah," Vaught said as he was reunited with Sam. "Welcome to Texas, you'll be used to the heat."

"We paid them $5 a week to risk their lives on a mission with us," Vaught recalled. "Except they didn't have weapons, they did not have body armor."

"A lot quit because of the dangers, but Sam was brave and stuck with us through the end," he said.

Other translators were killed.

"Five translators I had, two were killed, one was burned alive. They put themselves at great risk," Vaught said.

There was a window of opportunity for translators to flee Iraq, but Sam felt his work was not yet done.

When things became too dangerous and Sam wanted to immigrate to the U.S., that window had closed.

And that is what began the 11-year legal battle.

FOX 4 has followed this case with Vaught, a former state representative, and other lawmakers through the years.

Attorney Rochelle Rotea began to help while she was still in law school.

Friday, she arrived with Sam on a plane from California.

"Technically, I'm not his pro bono lawyer anymore because his case ended, but I just really wanted to see it all the way through and literally bring him home," Rotea said. 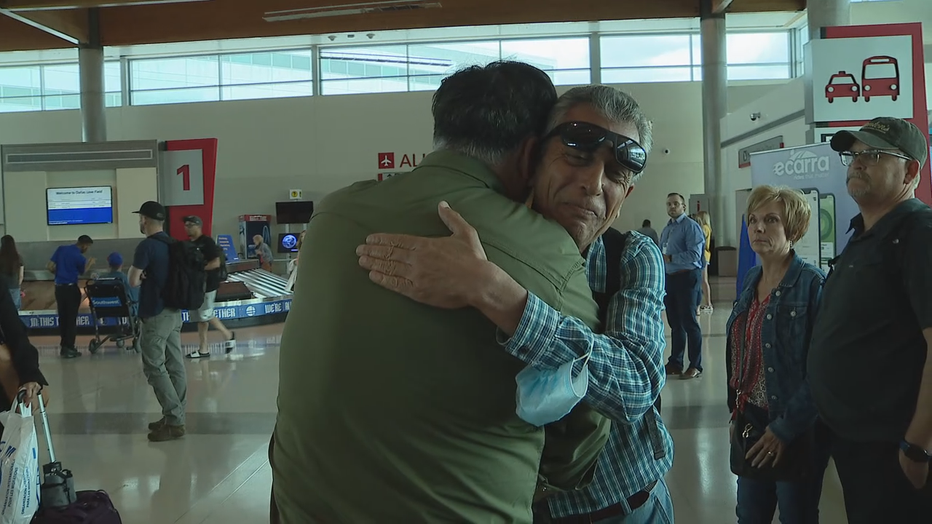 READ MORE: Couple that helped refugee family make it out of Afghanistan gets to meet them at DFW Airport

Vaught’s son, Jonathan, was in pre-school when his dad first began fighting for the person who was there for him in the middle of war. Now, Jonathan is going into the 10th grade.

"I'd been injured and so he drove all the way from Fallujah to the relatively hostile area - I mean for all of us, but certainly for someone who's Sunni - into the Shia area of Sadr City and came to our base to see me," Vaught recalled. "I've told my kids that it's important to keep your word."

Sam said he is thankful for a new life where he no longer has to live in fear.

"Freedom, that's freedom. Freedom is everything," he said.

Vaught is going to help Sam acclimate to the United States by helping him get an ID and learn how to apply for jobs.

Sam was a teacher before the war in Iraq.

So far, Vaught has raised $4,000 to help Sam get established.