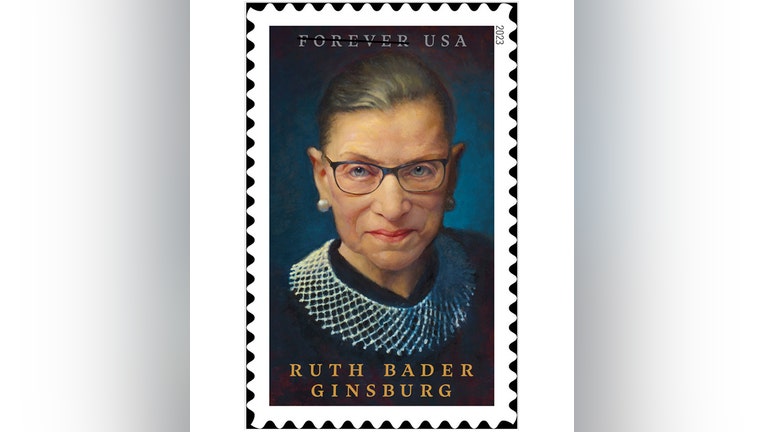 The U.S. Postal Service unveiled the design for its stamp honoring the late Supreme Court Justice Ruth Bader Ginsburg. Art director Ethel Kessler designed the stamp and Michael J. Deas painted the portrait, which is based on a photograph by Philip Be

The U.S. Postal Service is honoring the late Supreme Court Justice Ruth Bader Ginsburg as "an icon of American culture" with her own stamp.

The design, unveiled on Monday, is a painted portrait based on a photo of Ginsburg in a black robe with her signature white collar.

"After beginning her career as an activist lawyer fighting gender discrimination, Justice Ginsburg became a respected jurist whose important majority opinions advancing equality and strong dissents on socially controversial rulings made her a passionate proponent of equal justice and an icon of American culture," the agency said in its announcement. "The stamp features an oil painting of Justice Ginsburg facing the viewer in her black judicial robe with an intricate white collar."

Art director Ethel Kessler designed the stamp and Michael J. Deas painted the portrait, which is based on a photograph by Philip Bermingham, according to the USPS.

The first-class "forever" stamp of the liberal icon will come out sometime in 2023. The Ginsburg stamp was unveiled along with dozens of new stamps scheduled for release next year.

"The 2023 stamp program features a broad range of subjects and designs," USPS Stamp Services Director William Gicker said. "These miniature works of art highlight our unique American culture and offer a broad selection for those looking to collect stamps or send their mail around the nation or the world."