KILLEEN, Texas - A student in Killeen is being hailed as a hero. A Killeen ISD sixth-grader is one of the 15 Student Heroes being honored by the Texas State Board of Education for outstanding volunteer service across the state.

Long before Eastern Hills Middle School student Briana Liles won a state Student Hero Award, she was a local hero known for selling lots of lemonade from a pink, glittery stand called Miss B’s and always contributed to her favorite charity, according to Killeen ISD. As she sold lemonade, Liles has raised money for the National Alopecia Areata Foundation, which seeks a cure for an autoimmune skin disease that causes hair loss, which Liles has.

Now, the award-winning entrepreneur and fund-raiser has managed to collect more than $7,000 for the charitable foundation and she’s a hero again.

The KISD Board of Trustees recognized her at their regular meeting Tuesday where she received her official medal from State Board Member Tom Maynard.

Prior to receiving recognition for the state honor, Liles said she was honored to be among peers committed to helping others. “It makes me happy,” she said, “that the community realizes good people are helping others.” 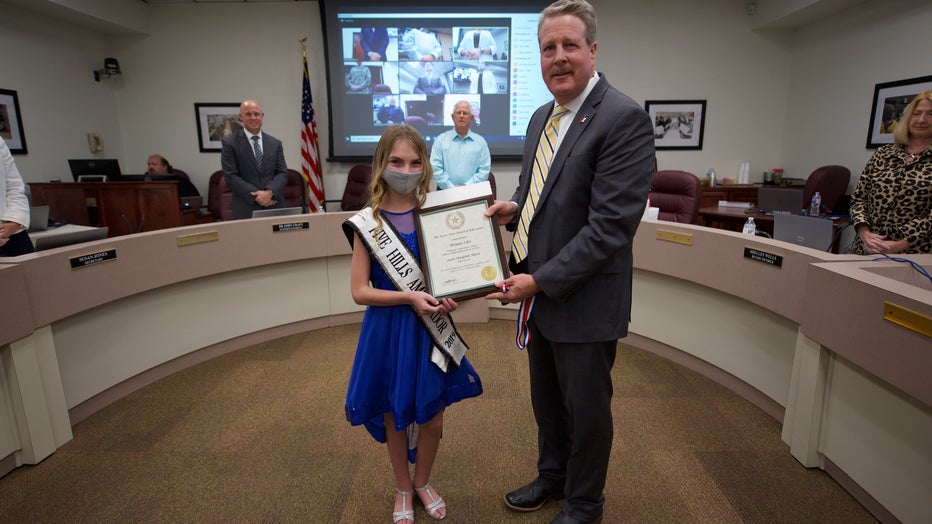 The KISD Board of Trustees recognized Briana Liles at their regular meeting where she received her official medal from State Board Member Tom Maynard.

In 2018, her efforts on Lemonade Day raised $975 from three locations and led to the title of National Lemonade Day Entrepreneur of the Year. The following spring, she won another award – a Bell County Incredible Kid award.

The daughter of William and Christy, Liles was a fourth-grader at Trimmier Elementary School when she received the national entrepreneur award, selected among 8,000 students across the country. By the time she won the Incredible Kid honor in April 2019, she had raised more than $2,500 for the Children’s Alopecia Project. She also collects supplies for a local animal shelter and volunteers at a nursing home.

That was just the beginning.

The hard-working student won a pageant in Copperas Cove in 2018, launching a year-long effort to raise awareness and money for the Children’s Alopecia Project.

The following year, Liles was named an ambassador for the pageant and continued her efforts, raising even more. “Lemonade Day taught me that it’s not all about money, but helping others,” she said. “With the pageant, I learned it’s not about how you look, but about working hard, meeting new people, and raising money for others.”