After a morning of testimony from two top national security aides who listened in on President Donald Trump’s call with Ukraine, the House Intelligence Committee continued the impeachment inquiry into the president with two more witnesses Tuesday in an afternoon hearing that ended after five hours.

WASHINGTON - After a morning of testimony from two top national security aides who listened in on President Donald Trump’s call with Ukraine, the House Intelligence Committee continued the impeachment inquiry into the president with two more witnesses Tuesday in an afternoon hearing that ended after five hours.

The House committee heard from former National Security Council aide Timothy Morrison and Kurt Volker, Trump’s former special envoy to Ukraine for peace negotiations, on their knowledge of events at the center of the impeachment inquiry.

Democrats say Trump demanded that Ukraine investigate his Democratic rivals in return for U.S. military aid it needed to resist Russian aggression and that may be grounds for removing the 45th president.

Trump says he did no such thing in his call with President Volodymyr Zelenskiy and the Democrats just want him gone.

Volker, along with European Union Ambassador Gordon Sondland and Energy Secretary Rick Perry, were part of the so-called “three amigos,” tasked with taking the lead on Ukrainian policy outside normal channels. Volker was also closely involved in negotiations with Ukrainian officials as they tried to figure out how to meet Trump’s demands. 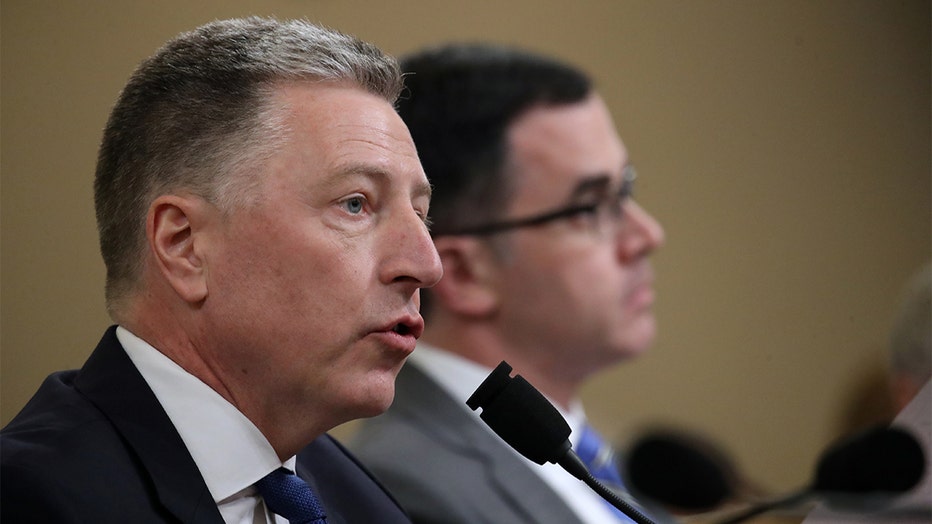 During his testimony, Volker told impeachment investigators that he only had one in-person meeting with Trump's personal lawyer, Rudy Giuliani. He said Giuliani raised the idea that former Vice President Joe Biden was compromised because his son Hunter was on the board of Burisma, a Ukraine gas company.

Volker said he considered that idea a conspiracy theory and rejected it. He said he's known Biden for more than two decades and believes him to be an honorable man.

"I've known former Vice President Biden for a long time. I know how he respects his duties of higher office and it's just not credible to me that a vice president of the United States is going to do anything other than act as how he sees best for the national interest," Volker said.

The former special envoy also said he was not aware of and never participated in an effort to get Ukraine to investigate the Bidens. But he added that he should have realized Trump was holding up military aid to Ukraine as a way to pressure the country to investigate the former vice president.

RELATED: Impeachment hearings: Who is testifying next and when

Volker testified that Trump told him that he should talk to his Giuliani about the new Ukrainian president.

Volker’s exchange with Trump happened soon after he and other officials returned to Washington from Zelenskiy’s inauguration in May. Volker and others spoke highly of Zelenskiy and urged Trump to host him for a White House meeting. But Trump pushed back and said the diplomats should talk to Giuliani.

The former U.S. special representative to Ukraine recalled that Trump said he hears “terrible things” about Zelenskiy and he should talk to Giuliani.

Volker testified that he “understood from that context that that’s where he hears it from” and he “didn’t take it as an instruction.”

Volker also said he felt a discussion of investigations was “inappropriate” in a July meeting between Ukrainians and U.S. officials at the White House.

Volker confirmed others’ testimony that Sondland, raised the investigations “in a generic way” to the Ukrainians and that then White House national security adviser John Bolton immediately ended the meeting.

The meeting happened two weeks before a call in which Trump asked Ukraine’s president to investigate Democrats. That call is central to the impeachment probe.

Other witnesses have testified that the investigations were discussed further in a second meeting that day. Volker said he doesn’t recall that discussion.

Volker said he now remembers a top Ukrainian official taking issue with advice he offered cautioning against political investigations. The former special envoy to Ukraine said that during a September dinner with Andriy Yermak, he’d discouraged Ukraine from trying to prosecute the country’s previous president.

Volker said he warned it would sow deep societal divisions.

Volker said Yermak quipped in response, “You mean like asking us to investigate Clinton and Biden?”

Volker claimed he didn’t “quite understand” the remark and was “kind of puzzled” by it.

Volker said he accepted the idea of Ukraine going along with a push by Giuliani to investigate the Ukraine gas company Burisma and the 2016 elections. 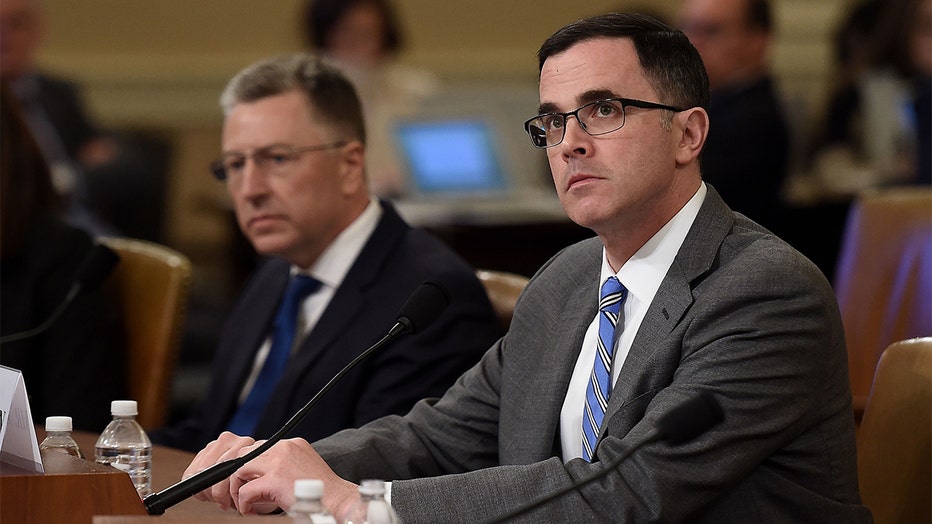 Morrison also listened to the July 25 phone call with the newly elected Ukraine president about political investigations into Joe Biden and told the committee in previous closed-door testimony that he “was not concerned that anything illegal was discussed.”

But Morrison also confirmed what diplomat William Taylor told investigators in earlier testimony — that Morrison had a “sinking feeling” when he learned that Trump was asking the Ukrainians to publicly announce an investigation of Biden and the Democrats.

“I can confirm,” Morrison wrote, that the substance of the diplomat’s testimony “is accurate.”

As Morrison spoke to impeachment investigators during his public testimony, he said he would not take a position on whether or not Trump should be impeached.

But he did say his fears over the phone call would become politicized "have been realized."

Morrison said he has no wish to question anyone else's character or integrity, but to offer his own recollections and judgments.

He added that his recent resignation from the Trump administration was voluntary and that he felt no pressure to resign nor did he receive any retaliation for his closed-door testimony to Congress.

Morrison also testified about two September exchanges with Sondland, who was taking a leading role in U.S. policy toward Ukraine.

According to Morrison, Sondland said he’d told a Ukrainian official that his government would have to announce investigations into Trump’s Democratic political foes to free up the U.S. military assistance.

Morrison said Sondland also told him there was no “quid pro quo,” but that Ukraine needed to announce those investigations to get the aid.

Morrison said his boss, who at the time was Bolton, told him to tell their lawyers about Sondland’s remarks.

Morrison also said one of his colleagues warned him about Sondland, and even coined a name for her concerns: “the Gordon problem.” Sondland clashed with some in the White House, including former adviser Fiona Hill, who Morrison said coined the phrase.

After talking to Hill, Morrison said he kept track of what Sondland was doing and “didn’t necessarily always act” on what he suggested.

The former top national security adviser to Trump said the rough transcript of Trump’s July 25 call with Zelenskiy was placed on a highly classified system by mistake.

Morrison said he and a top White House lawyer, John Eisenberg, agreed that access should be restricted to officials with high-level security clearances.

But Morrison said he later learned that the rough transcript of the call was placed on a highly classified server typically reserved for national secrets.

He said the placement on the more secure server “was a mistake. It was an administrative error.”

Morrison said nothing on the call warranted placement on the server.

Earlier on Tuesday morning, Lt. Col. Alexander Vindman, an Army officer at the National Security Council, and Jennifer Williams, his counterpart at Vice President Mike Pence’s office, said Tuesday morning during the public hearing that they had concerns as Trump spoke on July 25 with Zelenskiy.

“I found the July 25th phone call unusual because, in contrast to other presidential calls I had observed, it involved discussion of what appeared to be a domestic political matter,” Williams said in her opening remarks.

At the White House, Trump called the entire process a “kangaroo court” as Tuesday’s earlier hearing was underway.

In total, nine current and former U.S. officials are set to testify over the next three days as the House’s historic impeachment inquiry accelerates and deepens. Those appearing in public have already given closed-door interviews to investigators, and transcripts from those depositions have largely been released.

The Associated Press contributed to this report. This story was reported from Cincinnati and Los Angeles.