Texas Army National Guard Specialist Bishop E. Evans lost his life trying to save migrants in a river at the border of Texas and Mexico. Evans' family does not get any death benefits due to Evans being a national guard, and Operation Lone Star being a state deployment.

TEXAS - Operation Lone Star on the Texas border with Mexico is a state deployment. Because of that, guard members who are there are not eligible for a death benefit if they are killed. That’s the situation for the family of Texas National Guard Specialist Bishop Evans who drowned trying to save two migrants last week.

On Wednesday during a joint state committee hearing, it was announced that Evans was promoted to Sergeant in honor of his sacrifice.

After a moment of silence, General Thomas Suelzer, who heads up the Texas Military Department, admitted there is an insurance gap, not just for Evans, but all other National Guard and State Guard members.

"There is a Workmen’s Comp, death income benefit. It’s 75% of what your civilian job was. Paid weekly up to a $1,058 a week. And there is a state burial benefit up to $10,000, but that’s reimbursed. So to your point, one thing I think we need to look at, and fought for the past session, is an immediate death gratuity. If something happens to you on stay active duty. Because these families do struggle with, how am I going to pay for this funeral among us things," said Suelzer.

"What we are seeing with Operation Lone Star are deficiencies and things that were really always out there and now with 10,000 people down there, they’re magnified," said state Rep. James White (R-Woodville), who chairs the House Homeland Security Committee. 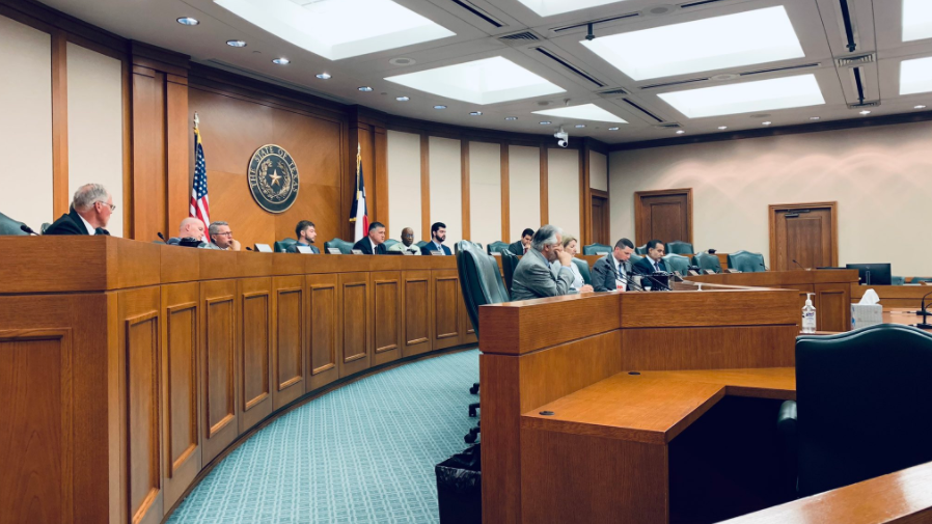 White asked the general what could be done right now to address the problem. The committee was told a quick fix apparently is not possible.

In social media posts, former Texas adjutant General John Nichols urged congressional leaders and state leaders to step in and do something.

While State action may have to wait until next session, state Rep. Richard Peña Raymond (D-Laredo), who chairs the Veterans Affairs Committee, said he would want any death benefit legislation to be retroactive to the beginning of operation Lone Star. That statement pleased Jim Brennan with the Texas Coalition of Veterans Organization.

"I think that’s crucial, I think the commitment is up there, from not just the chairman, but from the other members of both of these committees," said Brennan.

The guard is not only dealing with the lack of insurance coverage, but also a shortage in critical equipment. The committee was told an order for 235 flotation devices, made back in February, has not yet arrived. About 190 currently are spread out along the Rio Grande.

FOX 7 was told the flotation devices that are on order are a special design made to help compensate for the weight of bulletproof vests being worn. Gen. Moni Ulis was asked why not purchase enough for each guard member to wear, and if he was satisfied with having only one per unit.

Army Specialist Bishop Evans drowned last week while trying to save two migrants who were crossing the Rio Grande from Mexico.

"I am confident that one flotation device, at the security point is sufficient, given the number of occasions that we’ve had a service member actually attempt to assist migrants, absolutely," said Ulis.

General Ulis said they could buy 6,000 flotation devices for all the personnel on the border, but not everyone is stationed near water. In his opinion, doing that would be a waste of government money.

General Suelzer testified that guard members posted along the Rio Grande are told in safety briefings not to get into the water. During the hearing, it was confirmed that Evans did not have a floatation device when he died.

State Rep. Eddie Morales Jr (D-Eagle Pass) asked if that meant Evans was not in compliance with safety guidelines.

"Sergeant Evans, now, was a human being, he saw a human being drowning, he jumped in the water to save him," said General Suelzer.

Rep. Morales was told that Guard commanders have not drafted written protocols to stay out of the water.