As Willick’s video ends, she can be heard flagging down a pontoon boat, who carried the man back to safety. (Source: Sally Wallick via Storyful)

KELOWNA, Canada - Sally Wallick was recording her day on Okanagan Lake last month when she noticed a man stranded next to his capsized kayak.

As she paddled towards him, she didn’t panic. And she didn’t panic when she noticed his lips were turning purple, a sign that his body temperature was becoming dangerously low.

Instead, Wallick calmly asked him to abandon his boat and grab hold of hers.

"Leave the kayak," Wallick told the man. "We’ll find it. I promise."

Willick said she thinks the man had been in the water for about 45 minutes. She applauded him for being prepared for disaster on what had been a calm weather day up until winds picked up.

"He had all the right things, he had his phone, he was just very unlucky to have the weather turn in such an unpredictable way," Willick told Canadian news outlet Global News. 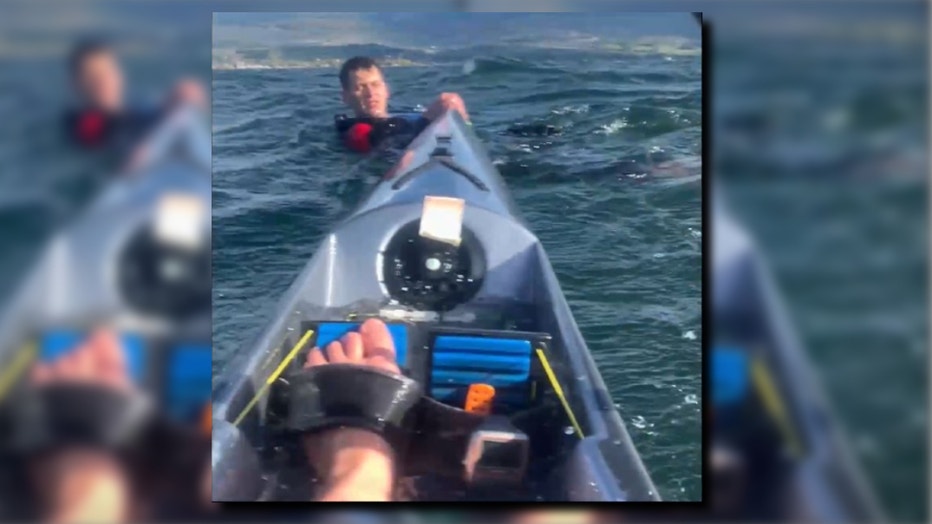 As Willick’s video ends, she can be heard flagging down a pontoon boat, who carried the man back to safety. (Source: Sally Wallick via Storyful)

Willick used his phone to arrange help onshore. The man grabbed Willick’s boat and the two began making their way back to land.

Suddenly, Willick noticed the man’s eyes closing and thought he was close to letting go.

But again, the cool-headed kayaker rejected panic. Instead, she climbed into the water with him, asked him to lie across her kayak and use his feet to paddle.

"I was just getting him to kick a little bit, trying to keep warm and then his eyes started closing and [he] started to really go limp," Wallick recalled.

As Willick’s video ends, she can be heard flagging down a pontoon boat, which carried the man back to safety.

Willick paddled back to land in her boat, not knowing if the man had survived. She later learned that he did and that he was not seriously injured.

"I’m just grateful that it all worked out," Wallick said. "I do kind of think about what would have happened maybe if the pontoon boat didn’t come."

This story was reported in Atlanta.