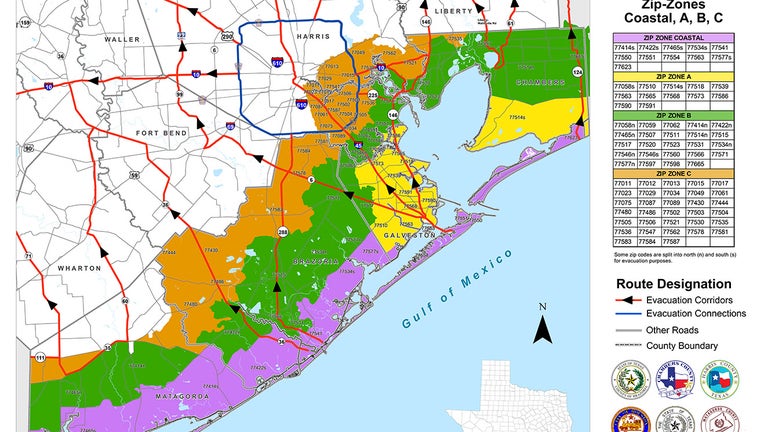 Hurricane Laura made landfall in Louisiana early Thursday morning as a Category 4 hurricane, and is weakening as it moves north.

Areas that reported minimal impacts from the hurricane are now lifting their evacuation orders and allowing residents to return home.

Brazoria County Judge Matt Sebesta has issued a Voluntary Evacuation for low-lying coastal communities outside the protection levee. All residents need to continue to watch Hurricane Laura closely, as the track for this storm continues to change. Be prepared and have a plan in place. Brazoria County will continue to provide updates on social media and the County website.

The mandatory evacuation order for resident who live in low-lying area, flood prone areas, and trailer/manufactured homes has been lifted. The curfew has also been lifted.

Mandatory evacuation ordered for all of Galveston Island

Residents are beginning to evacuate Galveston County after a mandatory order was issued ahead of Hurricane Laura.

Galveston County residents are free to return to the County. The county says conditions on the mainland and Galveston Island are safe for residents to make the trip back to their properties.

State Highway 87 and State Highway 124 are being cleared by the Texas Department of Transportation (TxDOT) and are expected to be opened later today. TxDOT is also in the process of assessing conditions and working to restart the ferry service to the Peninsula. An additional announcement will be made later today once the transportation routes to the Bolivar Peninsula are reopened.

Additional law enforcement assets have been dispatched to the unincorporated areas of Galveston County to provide added protection for residents’ properties as they make their return.

If residents reside in an incorporated city, they should listen to notices from those jurisdictions and follow any guidelines provided by their local city officials.

The City has lifted the mandatory evacuation and residents who left the island may safely return today. The City will be working with the state on the safe return of residents who evacuated on buses. The curfew order has been lifted, and there will not be a curfew in the city tonight.

The City says they did not sustain wind or storm damage, and water is receding in low-lying areas that experienced street flooding. As of this morning, CenterPoint is not reporting any power outages in Galveston.

Mayor Masters has declared a local disaster due to Hurricane Laura, and has issued a VOLUNTARY evacuation order for the City of Dickinson effective August 25th at 2:00 p.m

As of 11 a.m., Thursday August 27, 2020, Mayor Terri Gale has lifted the mandatory evacuation order for the City of Kemah. The City of Kemah will resume normal operations Friday, August 28, 2020. All facilities will be open and services available to the public.

League City Mayor Pat Hallisey has issued a local state of disaster and a voluntary evacuation order for all of League City. Residents in low lying areas including those along Clear Lake, Clear Creek and Dickinson Bayou, along with residents with medical needs and who use devices that require electricity, are strongly encouraged to consider evacuating. All residents need to be aware that City emergency response services could be limited during the height of the storm. Storm surge, strong winds, and power outages are expected during the storm.

A voluntary evacuation order that had been declared for Harris County residents in evacuation Zones A and B has now been lifted.

Officials say there were minimal weather impacts to the county, and now that the threat has passed, residents who evacuated are free to safely return to their homes.

In preparation for Hurricane Laura, the City is issuing a Voluntary Evacuation Order for all areas of La Porte, effective immediately. Residents are encouraged to strongly consider evacuating by early in the day Wednesday.

Mayor Thom Kolupski has extended the voluntary evacuation recommendation to the entire city. The National Weather Services has issued a Hurricane Warning for Seabrook and a Storm Surge Warning for Galveston Bay. While there is still a moderate degree of uncertainty regarding the track of the storm, Laura is now a hurricane and forecasted to strengthen to a category 3 before landfall.

The City says the recommendation to voluntary evacuate should seriously be considered by the city’s most vulnerable populations, including those who are disabled or have medical conditions. While the exact impacts of Hurricane Laura are unknown at this time, the City says there is an increased chance that some city services such as police, fire, and EMS may be affected by the storm.

Wind and storm surge are the greatest potential threats with Hurricane Laura. All residents, whether evacuating or planning to stay, should prepare their home by securing loose items outside the home including furniture, trampolines, potted plants, trash, and recycling containers, etc. Tropical-storm-force winds may arrive by Wednesday evening.

The exact track of Hurricane Laura is still subject to change quickly and all residents are urged to have a plan in place in the event of a mandatory evacuation. All non-essential city facilities will close at noon today, August 25, 2020. There will be no trash or recycling services on Thursday; service may resume on Friday depending on the impacts of the storm. While Wednesday service will not be impacted, residents should have their containers curbside by 7:00 a.m. and all containers must be secured or brought inside as soon as possible following pickup on Wednesday. Residents should not leave their trash and recycling bins unsecured during the storm.

Residents are urged to sign up for Seabrook Alerts through the city’s Swift911 notification system. Residents signed up to receive alerts may receive voice messages, text, and email notifications. Residents who are already signed up to receive alerts should review their communication preferences in the system. To register or to log in visit www.seabrooktx.gov/alerts. Alerts and updates will also be posted to www.seabrooktx.gov/Laura and on the city’s social media networks as the storm continues to move.

Mandatory evacuation order in place due to Hurricane Laura in Orange, Jefferson counties

In the event that you decide you want to evacuate on your own and you have no place to stay you can go to the following location for shelter:

A mandatory evacuation that was ordered for those living in structures unable to withstand intense weather conditions has been lifted.

Officials say Laura did not create any major damage to infrastructure, residences or businesses in Polk County.

The County Shelters were able to “stand down” Thursday morning and assist the shelter residents in returning home to their daily activities.