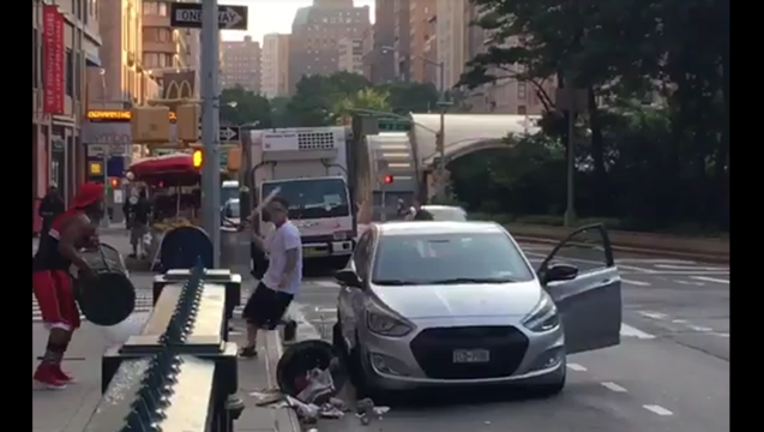 NEW YORK, NY (FOX 11) - A bizarre fight was caught on video in New York City between a man with a machete and a man with a trash can.

The fight, posted to Twitter by Paul Tena, was captured Wednesday morning on Manhattan's Upper West Side. It shows a man in a white shirt with a machete brawling with a man in a red tank top carrying a trash can. At one point a woman stands between them, before getting in a car between the two men.

The machete-wielding man then throws the sword at the man with the trash can, before running to get in the car with the woman.

But it doesn't stop there.

The man in the red tank yanks him out of the car and they throw punches in the middle of the street before separating only to start up again a few moments later, throwing things at each other.

The video ends with the man in red picking up his backpack as the other man gets back in the car.

According to DNA Info, the fight started when the man in red was crossing the street on his cellphone, and the other man became angry because he thought the pedestrian wasn't paying attention.

The website says the machete-wielding man was arrested for assault, among other charges.