ARDMORE, Pa. - A server in Ardmore asked a customer to mask up while he was walking through the restaurant Sunday. In response, the customer didn't leave a tip and wrote the word "MASK" on his credit card receipt.

Walk into John Henry's Pub of Ardmore and you can't miss the big sign that says, "Stop here, put on your mask."

But that didn't happen on Sunday when two customers dropped by for a couple of beers.

"I just politely said if you are walking through the bar, just put your masks on as you're walking. As soon as you sit down you can take them off. No big deal,"  Waitress Jamie Ledwith said. 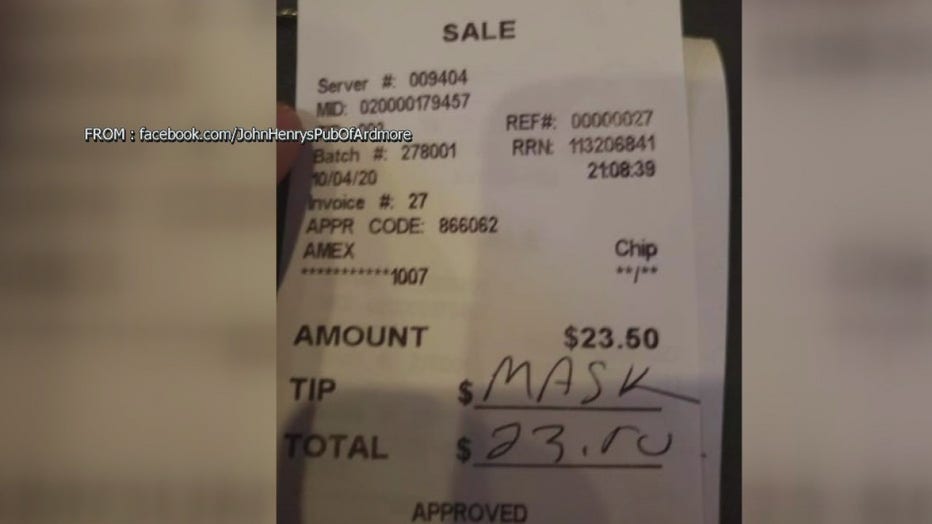 She adds the pair completely brushed her off.

After they left, she noticed the man who paid did not leave her a tip and wrote the word "MASK"  on the tip line of the receipt.

Ledwith told the owner Kathy Kearny who couldn't believe it.,

"It was not about losing the tip. It had nothing to do with it. It was more about the disrespect of her just doing her job," Kearny said. "She's following my rules. I'm following the governor's rule."

Kearny posted a picture of the receipt on the pub's Facebook page with a message to the person, "You" should be ashamed of yourself!!"

The support rolled in. One customer even left a card for Ledwith who is a single mother of a young son.

"Their kids signed the card and they put a little money in there for me. That was very heartfelt and very touching to me."