A new movie by Lifetime which is based on the grisly murders of Shanann Watts and her two daughters by their husband and father Chris will air on the Lifetime Movie Network on Jan. 25.

LOS ANGELES - A new movie by Lifetime which is based on the grisly murders of Shanann Watts and her two daughters by their husband and father Chris will air on the Lifetime Movie Network on Jan. 25.

"Chris Watts: Confessions of a Killer," depicts the tragic events in which Chris strangled his wife Shanann in their Colorado home in August of 2018 before murdering his two daughters and dumping their bodies in oil and gas containers where he worked.

Before failing a lie detector test and being charged, put on trial and convicted for the murder of his family, Chris had attempted to lead media on a wild goose chase, fabricating a story that his wife had disappeared with their kids following marital issues.

Chris Watts pleaded guilty to the murders on November 6 and is currently serving five life sentences without the possibility of parole after a plea deal guaranteed he would not face the death penalty.

“When Chris Watts tearfully pleaded to television cameras for the safe return of his missing pregnant wife Shanann and their two young daughters, dark secrets loomed just beneath the surface,” wrote Lifetime in a press release for the film. 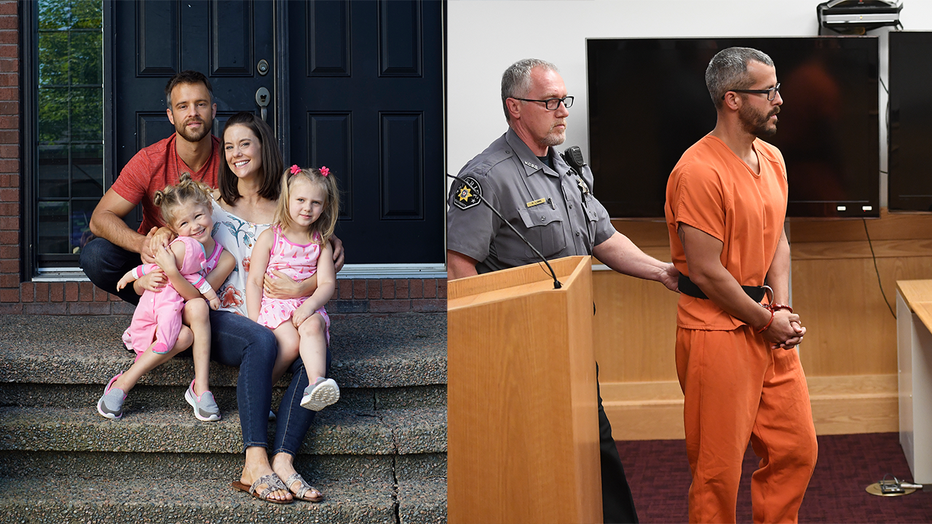 (LR) The actors portraying the Watts family next to a photo of Chris Watts during his trial.

The film portrays the months that led up to the horrific crimes, according to Lifetime.

According to A&E Network, Lifetime greenlit the film a year after the murders. Lifetime will also run a PSA following the film’s debut as part of their Stop Violence Against Women campaign in order to give viewers a resource on domestic violence.

According to People Magazine, Lifetime will also air a companion documentary entitled “Beyond the Headlines: The Watts Family Tragedy.” The documentary features unreleased interviews with officials who worked on the case.