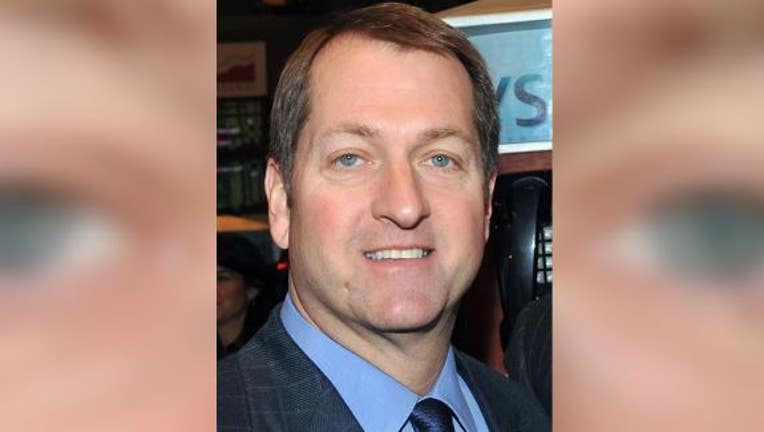 BUFFALO, N.Y. (AP) - The head of the company that makes baseball caps for the country's biggest sports leagues was arraigned on a felony charge Monday in Buffalo, New York, after allegedly driving his vehicle toward his girlfriend’s ex-husband during an argument over the weekend.

New Era, headquartered in Buffalo, supplies caps for Major League Baseball, and also makes the official sideline and on-court caps for the NFL and NBA.

The judge also issued a no-contact order on behalf of the alleged victim, whose name was not released. Erie County District Attorney John Flynn later identified him to reporters as the ex-husband of Koch's girlfriend.

Koch is accused of intentionally driving toward the ex-husband when the man got out of his vehicle in a Buffalo restaurant parking lot on Saturday. The man hurt his hand while jumping out of the way to avoid being hit, Flynn said. Koch then hit the man's vehicle, damaging the passenger side, the prosecutor said.

"Clearly there was a traffic accident, however, we firmly believe based upon the evidence that Mr. Koch committed no criminal acts whatsoever. The rest will be resolved in the courthouse," said Aaron Glazer, who along with attorney Paul Cambria Jr., is representing Koch.

A spokesman for New Era did not respond to an emailed request for comment.

A police report obtained by WIVB said Koch was pulling his SUV out of the parking area when the man arrived in his pickup truck and got out. The man approached Koch's vehicle "in an attempt to fight the defendant, stating, ‘Let’s settle this like men,’" the police report said.

"Defendant then recklessly drove his vehicle toward victim," the report said. "Victim rushed out of the way and suffered only a minor injury to the right hand."

Flynn told reporters the ex-husband went to the restaurant because he knew his former wife was there.

"It was not a chance encounter," he said.

Koch is due back in court May 25. The charge carries a maximum seven-year prison term.