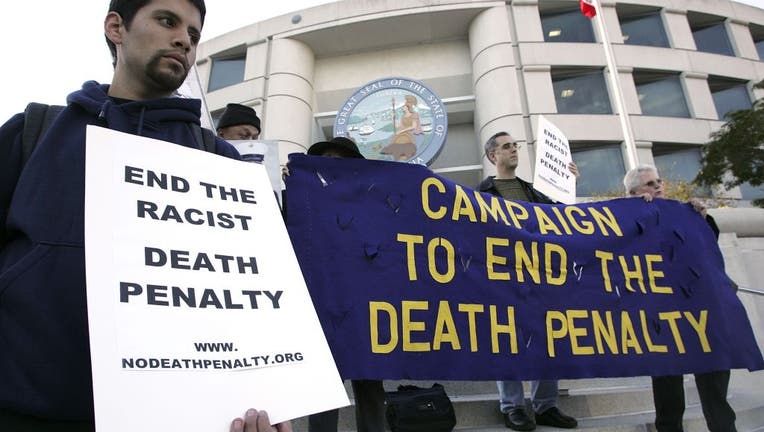 SAN FRANCISCO - JANUARY 12: Opponents of the death penalty carry signs during a rally opposing the death penalty January 12, 2005 on the steps of the California State building in San Francisco. Death penalty opponents are protesting the scheduled Jan

SACRAMENTO, Calif. - California’s process for imposing the death penalty “is now, and always has been, infected by racism,” Gov. Gavin Newsom declared Monday in a brief filed with the state Supreme Court.

Newsom filed the brief in the case of Donte Lamont McDaniel, who was sentenced to death in 2009 for the murder of 33-year-old George Brooks and 52-year-old Annette Anderson.

McDaniel’s case is challenging that interpretation of the state Constitution. In his brief, lawyers on behalf of Newsom argue not requiring juries to agree on those factors increases racial discrimination in death penalty cases. They argue that “decades of study” show the percentage of Black people excluded from juries in death penalty cases was “double to triple” that of whites, mostly because as a group Black people are more likely to oppose the death penalty than white people.

That’s a problem when it is time to sentence someone to death, they argue, because “overall, White jurors ‘are much less receptive to mitigation’ than Black jurors” in cases where the defendant is Black and the victim is white. Meanwhile, Black jurors “are more likely than white jurors to ‘keep the sin separate from the sinner’ no matter what the race.”

But beyond that, Newsom’s brief argues that the death penalty in the United States is “rooted in the legacy of slavery, racial terror and subjugation,” saying it has been “disproportionately applied, first, to enslaved Africans and African Americans, and, later, to free Black people.”

The brief was written on behalf of Newsom by two professors at the University of California, Berkeley, School of Law: Elizabeth Semel, director of the school’s Death Penalty Clinic, and Erwin Chemerinsky, the school’s dean. Newsom’s office said it was the first time a sitting California governor has filed a brief with the state Supreme Court “calling attention to the unfair and uneven application of the death penalty.”

“With this filing, we make clear that all Californians deserve the same right to a jury trial that is fair, and that is a matter of life and death,” Newsom said in a news release.

California has not executed anyone since 2006. In 2016, voters narrowly approved a ballot proposition designed to speed up the death penalty. But Newsom halted all executions in California last year, declaring he “will not oversee the execution of any individual.”

Nancy Haydt, executive director of anti-capital punishment advocacy group Death Penalty Focus, praised Newsom for saying the death penalty is racially biased. She pointed to cases in Los Angeles County, where 305 people have been sentenced to death since 1977. Of those, 44% are Black and 17% are white, according to the Habeas Corpus Resource Center. About 9% of Los Angeles County’s population is Black.