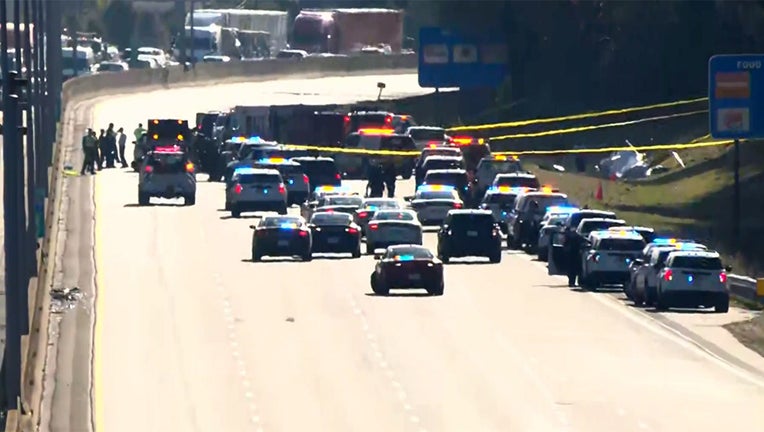 The helicopter crash was reported along Interstate 77 in the Charlotte area. (Credit: WBTV)

CHARLOTTE, N.C. - A pilot and a meteorologist were killed after a news helicopter crashed, the station confirms.

Mecklenburg County EMS service said Tuesday on Twitter that two people were pronounced dead at the scene of the helicopter crash along Interstate 77 in the Charlotte area. Police said that no vehicles were involved in the incident, while federal authorities stated that two people were onboard the aircraft.

The victims were on board the Robinson R44 helicopter, which crashed around 12:20 p.m. local time, according to a statement from The Federal Aviation Administration.

"The WBTV family is grieving a terrible loss," the station posted on its website. "Our news helicopter Sky3 crashed mid-day Tuesday with two of our colleagues on board. Meteorologist Jason Myers and pilot Chip Tayag lost their lives. We are working to comfort their families in this difficult time. We appreciate the outpouring of support for our staff and your continued prayers for their families."

Preliminary witness accounts indicate that the pilot made some "diversionary" maneuvers and "tried to avoid injuring anyone else" and "probably saved some lives," Johnny Jennings, chief of the Charlotte-Mecklenburg Police Department, told reporters.

"And if that is truly the case, then that pilot is a hero in my eyes to make sure that the safety and security of those that were driving was not in jeopardy," Jennings said.

The chief added: "We’re looking at going into the holiday season where we’re supposed to be spending time with our loved ones. And tragically, there are two people involved in this crash that will not be going home and will not be spending the holidays with their family."

According to the station, Myers grew up in Union and Catawba counties and watched the channel as a child. His career included stops in Raleigh, Texas and Virginia. He was married his childhood friend, Jillian, and the two have four children together.

The National Transportation Safety Board will lead an investigation into the crash along with the FAA.

The crash shut down southbound lanes of the Interstate.