The White House said Wednesday that North Korea is covertly sending a significant number of artillery shells to Russia amid the war with Ukraine. Political science professor, Mikhail Alexseev talks with LiveNOW from FOX's Josh Breslow to provide the latest information.

WASHINGTON - The White House on Wednesday accused North Korea of covertly shipping a "significant number" of artillery shells to Russia in support of its invasion of Ukraine.

National Security Council spokesman John Kirby said the U.S. believes North Korea is "trying to make it appear as though they’re being sent to countries in the Middle East or North Africa." He declined to provide a specific estimate on the quantity of ammunition being sent to bolster the Russian effort.

RELATED: Barrage of Russian strikes hit Ukrainian cities, most of Kyiv without water

Kirby said North Korea "is covertly supplying" the ammunition to Russia, but that, "we’re still monitoring this to determine whether the shipments are actually received." He added that the U.S. has "an idea" of which country or countries the North may funnel the weapons through but wouldn't specify, because the administration continues to look at how it might respond to North Korea's actions.

Kirby insisted the North Korean shipments are "not going to change the course of the war," citing Western efforts to resupply the Ukrainian military. 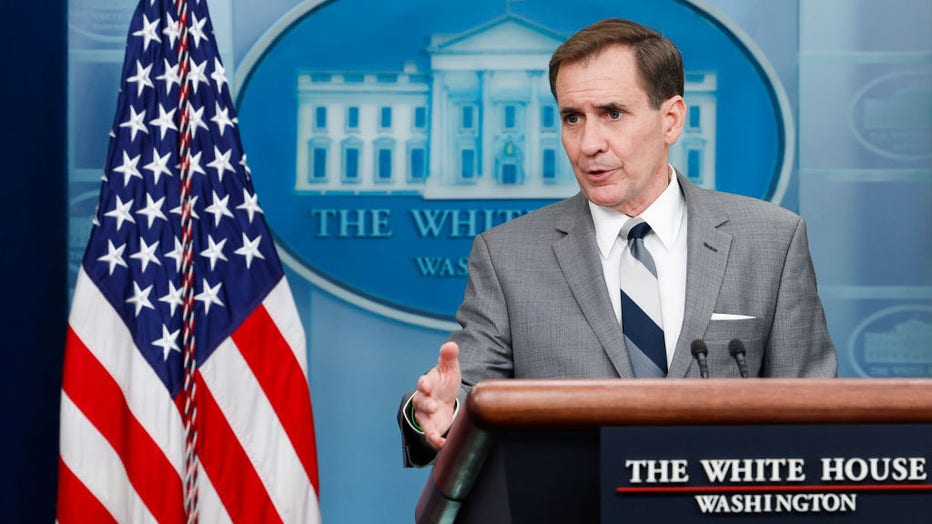 The White House would not specify the mode of transportation or whether the U.S. or other nations would attempt to interdict the shipments to Russia.

The White House revealed the new intelligence nearly two months after first alleging that U.S. intelligence officials had determined the Russian Ministry of Defense was in the process of purchasing millions of rockets and artillery shells from North Korea for its ongoing fight in Ukraine.

As the war in Ukraine continues, Russia's president has declared martial law in the annexed regions of the country. LiveNOW from FOX's Josh Breslow explains what that means and what's next for the war.

Even as the administration revealed information about the covert North Korean artillery shell shipments, the White House also ought to downplay their significance.

"We don’t believe that they are in such a quantity that they would change the direction of this war or tangibly change the momentum either in the east or in the south" where some of the heaviest fighting in Ukraine is taking place, Kirby said.

The finding comes after the Biden administration in August said the Russian military took delivery of hundreds of Iranian-manufactured drones for use on the battlefield in Ukraine. The Biden administration said Iran has also sent personnel to Russian-controlled Crimea to provide technical support on operation of the drones. Iranian officials have denied they have provided drones or other support to Russia.

North Korea has sought to tighten relations with Russia as much of the West has pulled away, blaming the United States for the Ukraine crisis and decrying the West’s "hegemonic policy" as justifying military action by Russia in Ukraine to protect itself.

North Korea’s ambassador to Moscow has met with envoys from two Russia-backed separatist territories in the Donbas region of Ukraine and expressed optimism about cooperation in the "field of labor migration," citing his country’s easing of pandemic border controls.

In July, North Korea became the only nation aside from Russia and Syria to recognize the independence of the territories, Donetsk and Luhansk, further aligning with Russia over the conflict in Ukraine.

The North’s arms export to Russia would be a violation of U.N. resolutions that ban the country from exporting to or importing weapons from other countries. Its possible dispatch of laborers to the Russian-held territories in Ukraine would also breach a U.N. resolution that required all member states to repatriate all North Korean workers from their soil by 2019.