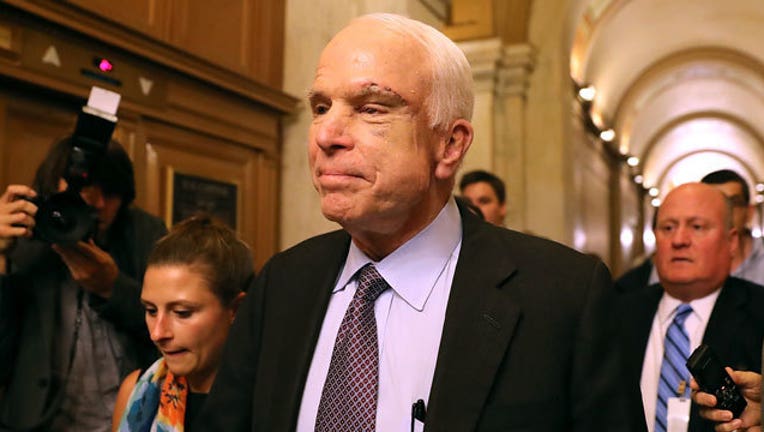 Sen. John McCain (R-AZ) leaves the the Senate chamber at the U.S. Capitol after voting on the GOP 'Skinny Repeal' health care bill on July 28, 2017 in Washington, DC. (Photo by Justin Sullivan/Getty Images)

Unable to pass even a so-called "skinny repeal," it was unclear if Senate Republicans could advance any health bill despite seven years of promises to repeal "Obamacare."

"This is clearly a disappointing moment," said Senate Majority Leader Mitch McConnell, R-Ky. "I regret that our efforts were not enough, this time."

"It's time to move on," he said. The vote was 49-51 with three Republicans joining all Democrats in voting 'no.'

McConnell put the health bill on hold and announced that the Senate would move onto other legislation next week.

Trump responded on Twitter: "3 Republicans and 48 Democrats let the American people down. As I said from the beginning, let ObamaCare implode, then deal. Watch!"

A key vote to defeat the measure was cast by Sen. John McCain, R-Ariz., who returned to the Senate this week after receiving a diagnosis of brain cancer. In an impassioned speech the day he returned, McCain had called for bipartisanship on major issues of national concern, and a return to the "regular order" of legislating by committee.

Two other Republicans - Sens. Lisa Murkowski of Alaska and Susan Collins of Maine - joined McCain and all Democrats to reject the amendment, which would have repealed a mandate that most individuals get health insurance and would have suspended a requirement that large companies provide coverage to their employees. It would have also suspended a tax on medical devices and denied funding to Planned Parenthood for a year.

On Twitter, McCain said the repeal bill "fell short of our promise to repeal & replace Obamacare w/ meaningful reform," adding, "I hope we can rely on humility, cooperation & dependence on each other to better serve the people who elected us."

The amendment was a last resort for Senate Republicans to pass something - anything - to trigger negotiations with the House.

"It's time to turn the page," said Senate Minority Leader Charles Schumer of New York. "We are not celebrating. We are relieved."

Health and Human Services Secretary Tom Price said in a statement that the Trump administration would pursue its health care goals through regulation. "This effort will continue," Price said. But insurers, hospitals, doctors, and consumer groups are pressing the administration to guarantee billions of dollars in disputed subsidies to help stabilize insurance markets around the country.

Buoyed by a signal from House Speaker Paul Ryan, McConnell had introduced a pared-down health care bill late Thursday that he hoped would keep alive Republican ambitions to repeal "Obamacare."

McConnell called his measure the Health Care Freedom Act. It was not intended to become law, but to open a path for a House-Senate conference committee to try to work out comprehensive legislation Congress could pass and send to Trump.

The Congressional Budget Office said the amendment would have increased the number of uninsured people by 16 million, the same problem that vexed all the "repeal and replace" measures Republicans have offered. Obama's law extended coverage to some 20 million people, reducing the nation's uninsured rate to a historic low of around 9 percent.

Still, Ryan, R-Wis., had seemingly opened a path for McConnell earlier Thursday by signaling a willingness to negotiate a more comprehensive bill with the Senate. Some Republican senators had been concerned that the House would simply pass McConnell's "skinny bill" and send it to Trump. That would have sent a shock wave through health insurance markets, spiking premiums.

Ryan sent senators a statement saying that if "moving forward" requires talks with the Senate, the House would be "willing" to do so. But shortly afterward, his words received varied responses from three GOP senators who'd insisted on a clear commitment from Ryan.

"Not sufficient," said McCain, who returned to the Capitol Tuesday. The 80-year-old McCain had been home in Arizona trying to decide on treatment options for brain cancer.

Sen. Lindsey Graham, R-S.C., initially said "not yet" when asked if he was ready to vote for the scaled-back Senate bill. But later, he told reporters that Ryan had assured him and others in a phone conversation that the House would hold talks with the Senate.

"I feel comfortable personally. I know Paul; he's a man of his word," said Graham.

As the convoluted developments played out, the slender 52-48 GOP majority was divided among itself over what it could agree to. Democrats were unanimously opposed.

After a comprehensive "repeal and replace" bill failed on the Senate floor, and a straight-up repeal failed too, McConnell and his top lieutenants turned toward the "skinny repeal."

It was to have been the ticket to negotiations with the House, which had passed its own legislation in May.

And a bipartisan group of governors including John Kasich of Ohio and Brian Sandoval of Nevada also announced against it. So did the American Medical Association.

Numerous polls had shown little public support for the GOP's earlier proposals to repeal and replace Obama's law. A recent AP-NORC poll found only 22 percent of the public backing the Republican approach, while 51 percent were opposed.

In the end the misgivings of a few Republican senators derailed the GOP's seven-year quest to roll back "Obamacare." It remains to be seen whether a bipartisan deal can now be reached to stabilize insurance markets that have been rattled by rising premiums and insurer exits.

The dizzying series of legislative maneuvers this week left even veteran senators puzzled.