McALESTER, Okla. - Oklahoma administered the death penalty Thursday on a man who convulsed and vomited as he was executed for the 1998 slaying of a prison cafeteria worker, ending a six-year execution moratorium brought on by concerns over its execution methods.

John Marion Grant, 60, who was strapped to a gurney inside the execution chamber, began convulsing and vomiting after the first drug, the sedative midazolam, was administered. Several minutes later, two members of the execution team wiped the vomit from his face and neck.

Before the curtain was raised to allow witnesses to see into the execution chamber, Grant could be heard yelling, "Let's go! Let's go! Let's go!" He delivered a stream of profanities before the lethal injection started. He was declared unconscious about 15 minutes after the first of three drugs was administered and declared dead about six minutes after that, at 4:21 p.m.

Someone vomiting while being executed is rare, according to observers.

"I’ve never heard of or seen that," said Robert Dunham, executive director of the nonpartisan Death Penalty Information Center. "That is notable and unusual." 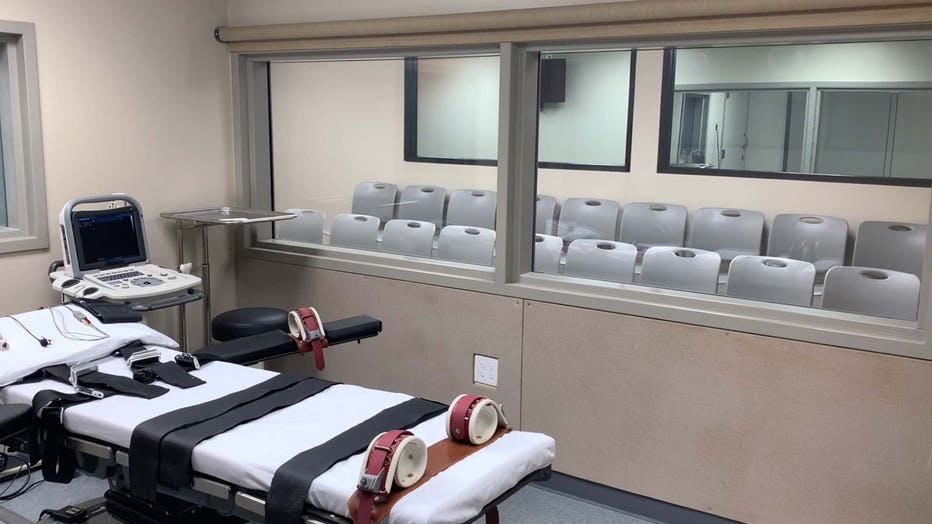 Michael Graczyk, a retired Associated Press reporter who still covers executions for the organization on a freelance basis, has witnessed the death penalty being carried out about 450 times. He said Thursday he could only recall one instance of someone vomiting while being put to death.

A statement from Republican Gov. Kevin Stitt referenced a section of the Oklahoma Constitution in which voters overwhelmingly enshrined the death penalty.

"Today, the Department of Corrections carried out the law of the State of Oklahoma and delivered justice to Gay Carter’s family," Stitt said.

Grant was the first person in Oklahoma to be executed since a series of flawed lethal injections in 2014 and 2015. He was serving a 130-year prison sentence for several armed robberies when witnesses say he dragged prison cafeteria worker Gay Carter into a mop closet and stabbed her 16 times with a homemade shank. He was sentenced to die in 1999.

RELATED: Families of 9 killed by Dylann Roof at SC church settle with DOJ over gun

"At least now we are starting to get justice for our loved ones," Carter's daughter, Pamela Gay Carter, said in a statement. "The death penalty is about protecting any potential future victims. Even after Grant was removed from society, he committed an act of violence that took an innocent life. I pray that justice prevails for all the other victims' loved ones. My heart and prayers go out to you all."

Oklahoma moved forward with the lethal injection after the U.S. Supreme Court, in a 5-3 decision, lifted stays of execution that were put in place on Wednesday for Grant and another death row inmate, Julius Jones, by the 10th U.S. Circuit Court of Appeals.

The state’s Pardon and Parole Board twice denied Grant’s request for clemency, including a 3-2 vote this month to reject a recommendation that his life be spared.

Oklahoma had one of the nation’s busiest death chambers until problems in 2014 and 2015 led to a de facto moratorium. Richard Glossip was just hours away from being executed in September 2015 when prison officials realized they received the wrong lethal drug. It was later learned the same wrong drug had been used to execute an inmate in January 2015.

The drug mix-ups followed a botched execution in April 2014 in which inmate Clayton Lockett struggled on a gurney before dying 43 minutes into his lethal injection — and after the state’s prisons chief ordered executioners to stop.

While the moratorium was in place, Oklahoma moved ahead with plans to use nitrogen gas to execute inmates, but ultimately scrapped that idea and announced last year that it planned to resume executions using the same three-drug lethal injection protocol that was used during the flawed executions. The three drugs are: midazolam, a sedative, vecuronium bromide, a paralytic, and potassium chloride, which stops the heart.

Oklahoma prison officials recently announced that they had confirmed a source to supply all the drugs needed for Grant's execution plus six more that are scheduled to take place through March.

"Extensive validations and redundancies have been implemented since the last execution in order to ensure that the process works as intended," the Department of Corrections said in a statement.

More than two dozen Oklahoma death row inmates are part of a federal lawsuit challenging the state’s lethal injection protocols, arguing that the three-drug method risks causing unconstitutional pain and suffering. A trial is set for early next year.

Dale Baich, an attorney for some of the death row inmates in that suit, said eyewitness accounts of Grant's lethal injection show Oklahoma's death penalty protocol isn't working as it was designed.

RELATED: Decades on death row: Taking a closer look at an Arizona murder case and the family the victim left behind

"This is why the U.S. Supreme Court should not have lifted the stay," Baich said in a statement. "There should be no more executions in Oklahoma until we go (to) trial in February to address the state’s problematic lethal injection protocol."

Grant and five other death row inmates were dismissed from the lawsuit after none of them selected an alternative method of execution, which a federal judge said was necessary. But a three-member panel of the Denver-based 10th U.S. Circuit Court of Appeals determined that the inmates did identify alternative methods of execution, even if they didn’t specifically check a box designating which technique they would use. The panel had granted stays of execution on Wednesday for Grant and Jones, whose lethal injection is set for Nov. 18.

Jones — whose case has drawn national attention since being featured in 2018 on the ABC television documentary series "The Last Defense" — has a clemency hearing set for Tuesday. Jones, 41, has maintained his innocence in the 1999 shooting death of an Oklahoma City-area businessman. The state Pardons and Parole Board in March recommended that Stitt, the governor, commute his death sentence to life imprisonment.

Stitt has said he will not decide whether to spare Jones' life until the clemency hearing.

Grant and his attorneys did not deny that he killed Carter.

"John Grant took full responsibility for the murder of Gay Carter, and he spent his years on death row trying to understand and atone for his actions, more than any other client I have worked with," attorney Sarah Jernigan said Thursday in a statement after the execution.

But Grant's attorneys argued that key facts about the crime and Grant’s troubled childhood were never presented to the jury. They maintained that Grant developed deep feelings for Carter and was upset when she fired him after he got in a fight with another kitchen worker.

"Jurors never heard that Mr. Grant killed Ms. Gay Carter while in the heat of passion and despair over the abrupt end of the deepest and most important adult relationship of his life," his attorneys wrote in his clemency application.

Pamela Carter, who also worked at the prison and was there the day her mother was killed, rejected the idea that her mother and Grant had anything more than a professional relationship and urged state officials to move forward with the execution.

"I understand he’s trying to save his life, but you keep victimizing my mother with these stupid allegations," she told the Pardon and Parole Board this month. "My mother was vivacious. She was friendly. She didn’t meet a stranger. She treated her workers just as you would on a job on the outside. For someone to take advantage of that is just heinous."