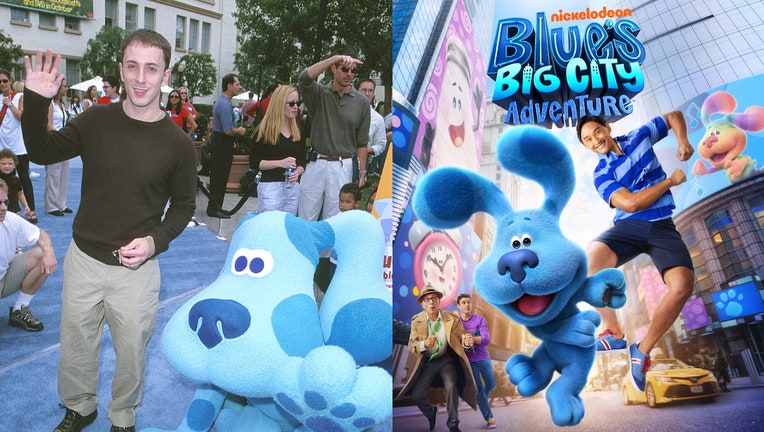 The upcoming "Blue’s Clues" film dropped a big clue about the movie when the beloved original show host, Steve Burns, appeared in the recently-released trailer.

"Blue’s Big City Adventure" is set to be released for streaming on November 18 exclusively on Paramount+.

The movie, which started production over the summer, follows Josh, played by Josh Dela Cruz, and Blue as they travel to New York City to audition for a Broadway musical.

RELATED: Hilary Swank announces she's pregnant: 'Not just of 1, but 2'

"When Josh gets the opportunity of a lifetime to audition for Rainbow Puppy’s Broadway musical, Josh and Blue skidoo to NYC for the very first time where they meet new friends and discover the magic of music, dance, and following one’s dreams! " Paramount said on its YouTube channel.

Burns then appears to join the cast later in the movie.

"Blue’s Clues" originally debuted on Sept. 8, 1996, and featured Burns navigating his animated house and solving low-stakes mysteries with his pet animated dog, Blue. The original Nickelodeon show ran from 1996 to 2007, with a human host solving a puzzle by deciphering the meaning of Blue’s barks and paw prints — with assistance from young viewers chiming in with their thoughts.

However, in a 2002 episode, Burns abruptly left the show, explaining at the time that his character was going off to college. He handed hosting duties off to his "brother," Joe.

RELATED: Bad Cinderella on Broadway in 2023

Entertainment Weekly reported that Burns left the show and eventually made music with Flaming Lips producer David Fridmann and drummer Steve Drozd. The trio released an alternative rock album titled "Songs for Dustmites" not long after he left in 2002. However, he’s always remained proud of his time on "Blue’s Clues" and protective of its fans in subsequent interviews.

In 2021, Burns posted a video on social media with a message to the show’s now-adult fans to mark its 25th anniversary.

"I guess I just wanted to say that after all these years I never forgot you. Ever. And I'm super glad we're still friends," he said in part.