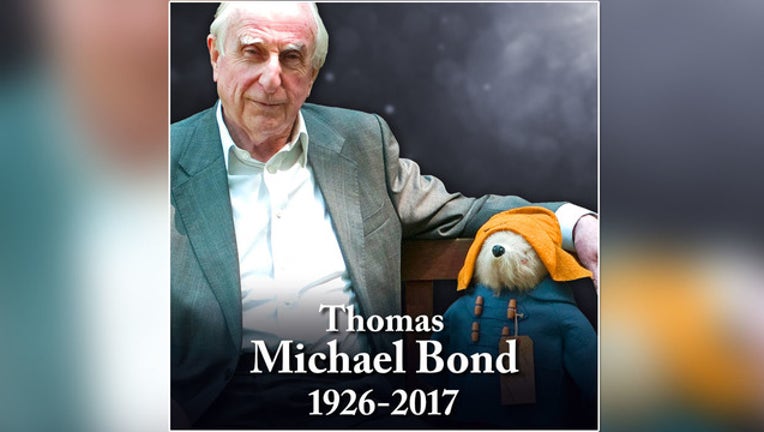 LONDON - It was a last-minute Christmas gift for his wife that inspired Michael Bond to create Paddington bear, the marmalade-loving teddy in a duffel coat and floppy hat.

Bond would go on to see his creation enchant children for more than half a century and become an icon immortalized in print, on screens and as countless stuffed toys before his death at age 91.

His publisher, HarperCollins, said Wednesday that the author died at his home a day earlier after a short illness.

Ann-Janine Murtagh, executive publisher of HarperCollins Children's Books, said Bond "will be forever remembered for his creation of the iconic Paddington, with his duffel coat and wellington boots, which touched my own heart as a child and will live on in the hearts of future generations."

The furry adventurer first appeared in "A Bear Called Paddington" in 1958 - a stowaway from "Darkest Peru" who arrived at London's Paddington train station wearing a sign saying "Please look after this bear. Thank you."

Adopted by the kindly Brown family, the misadventure-prone bear went on to star in more than 20 books, several television series and a 2014 feature film. A sequel is currently in production.

The books have sold some 35 million copies worldwide and have been translated into 40 languages, including Latin ("Ursus Nomine Paddington.")

Born in Newbury, southern England, on Jan. 13 1926, Bond served in both the Royal Air Force and the British Army during World War II. He began writing while stationed with the army in Egypt in 1945.

He was working as a BBC cameraman when he created his most famous character. Paddington was inspired by a teddy bear that Bond bought for his wife one Christmas Eve as a stocking filler and named after the station he used for daily commutes.

Today, stuffed Paddingtons are for sale in toy stores and souvenir stands around Britain. A statue of the beloved bear stands at his namesake station.

In creating the initially homeless Paddington, Bond drew on memories of the refugees and evacuees who streamed through British train stations before and after World War II, seeking security in safer places. Many of the children had name tags hung around their necks.

Bond said a sense of vulnerability "was an important part of Paddington's persona" and a reason why children were drawn to him.

Explaining the character's enduring appeal in 2008, Bond said "there's something about bears which sets them apart from the other toys."

"I think dolls are always wondering what they're going to wear next," he told The Associated Press. "Bears have this quality that children in particular feel they can tell their secrets to and they won't pass them on."

Actor Hugh Bonneville, who plays Mr. Brown in the movie adaptations, said news of Bond's death came on the final day of shooting for the upcoming film.

Bonneville said Paddington's "enthusiasm and optimism has given pleasure to millions across the generations."

"Michael will be greatly missed by his legions of fans and especially by his wife, Sue, his family and of course by his beloved guinea pigs," he said. "He leaves a special legacy: long live the bear from darkest Peru."

In addition to the Paddington stories, Bond wrote a series of books about a guinea pig named Olga da Polga and a string of novels for adults about a French detective called Monsieur Pamplemousse.

Bond is survived by his wife and his children, Karen and Anthony.