A suspect is dead after a lengthy chase with authorities that began from southeast Houston to the Greenspoint area. FOX 26’s Greg Groogan tells us what happened and why the police were pursuing this person.

HOUSTON - Authorities say a suspect died in an exchange of gunfire with SWAT officers and constable deputies at the end of a pursuit in north Houston.

The chase came to an end in the parking lot of a store near Beltway 8 and Greenspoint Drive shortly before noon.

According to police, the suspect exited the vehicle with an "AR-15-style rifle" and started shooting at officers, who returned fire.

Police say the suspect went down and three medics that typically work with the SWAT unit rendered aid. The suspect was pronounced dead at the scene.

A shooting suspect was pursued by Harris County law enforcement and ended near a Goodwill Store.

Authorities say a citizen also received a minor wound to his leg, possibly from a ricochet or shrapnel. He was taken to the hospital as a precaution.

According to officials, two Houston Police Department SWAT officers and two deputies with the Harris County Pct. 4 Constable’s Office fired during the incident. No officers were injured.

According to the constable’s office, the suspect was believed to have been involved in an incident in which shots were fired at a Pct. 4 station on Holzwarth Road on Monday.

Speaking in front of the shattered glass doors of the station on Thursday, Constable Mark Herman said, "Three days ago, I stood before you here at the same location and spoke to you about a suspect that chose to drive by this office and spray it with a barrage of bullets into the police station. Today that suspect also chose to lead our deputies on a high-speed pursuit. At the conclusion of that pursuit, the same suspect chose to pull a weapon and discharge it at law enforcement."

Houston Police Department officials provide the details on what happened after a pursuit ends with a suspect dead in Greenspoint.

Through their investigation, the constable’s office says, they were able to develop a suspect, and on Thursday they received information on an area he may have been in.

The constable says they were coordinating with the Houston Police Department and had already asked for their assistance to have SWAT on standby if needed.

Constable Herman says a patrol unit in Houston’s south side spotted the vehicle they believed the suspect to be in and tried to initiate a traffic stop, but a pursuit started.

Around 11 a.m., the constable’s office said the pursuit was on 610 approaching Postwood. Around 11:10 a.m., it was located near Beltway 8 and Red Bluff. 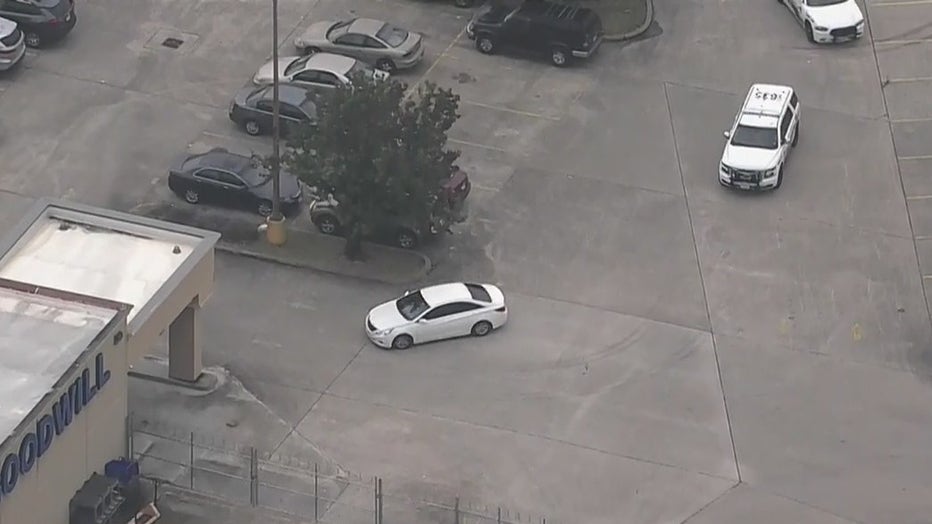 Authorities in pursuit of a vehicle in the parking lot of a store in the Greenspoint area of north Houston.

The pursuit went north and entered Downtown Houston just before 11:30 a.m. A Veterans Day parade was scheduled to begin at that time. Police say they had already been monitoring the chase and had given the order to delay the start of the parade of an abundance of caution.

The suspect vehicle ended up leaving Downtown and going north on I-45, before pulling into the parking lot where the chase concluded. Police say SWAT officers were able to stop the suspect’s car by hitting it with their vehicle head-on.

Several agencies were at the scene investigating the shooting.