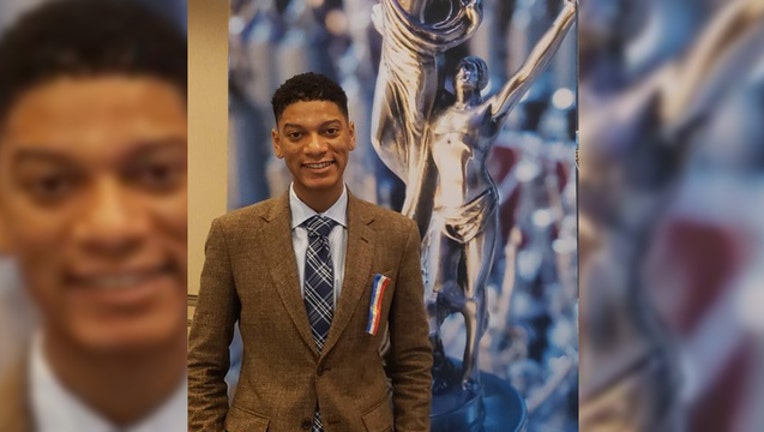 PFLUGERVILLE, Texas - A Pflugerville ISD speech and debate student became the first to win a national title for the district in June.

On June 21, Hendrickson High School’s Rene Otero became the first Pflugerville ISD student to win a national competition as he finished first out of 242 students in the international extemporaneous (extemp) speaking category at the 2019 National Speech & Debate Association National Tournament in Dallas.

“Obviously, he’s really intelligent and he works extremely hard, but Rene makes you want to listen to him,” HHS Speech and Debate director Kirsten Nash said. “You want him to be successful and you want to learn from him.”

In addition to being the district’s first national champion, Otero is the first African American to win an NSDA Nationals title in extemp.

“For me, the best part of winning is what it means for those kids who come after me,” Otero said. “If you see someone like you, then you feel like it is possible. I never felt limited by my identity when I was on the team at HHS, and now other kids can see this achievement and know that if they don’t limit themselves, then great success can happen.”

Otero also received the President’s Bowl for his overall performance at NSDA nationals and was a finalist for the organization’s Student of the Year Award.

“He is the most charismatic kid I’ve seen,” Nash said. “We can be on a shuttle to the hotel or in a restaurant waiting for a table, and he naturally starts up the conversation. People want to engage and talk with him.”

After six preliminary rounds at nationals, the field is cut from 242 students down to 60. Then, two more rounds are held to narrow the field to 30 for the quarterfinals. Only 14 students advance to semifinals and six are taken to the final round.

During the finals, Otero responded to the question, “Should political leaders focus first on political empowerment or economic equality?”

Pflugerville was also represented by Pflugerville High School sophomore Joseph Garza finishing 16th out of 500 in Congressional House Debate and HHS seniors Trey Gutierrez and Dylan Scott advancing to quarterfinals of Policy Debate, placing them in the top 30 teams in the country.

Alejandro Castaneda, Eliana Galan, Sanjitha Yedavalli, Claire Martinez and Isabelle Cano, of the Hendrickson World Schools Debate Team, placed in the top 60 teams from across the world. Hendrickson was also represented by Sydney Stogel in oratory.

This was Hendrickson’s tenth appearance at the NSDA National Tournament.

Otero finished fourteenth as a sophomore and eighth as a junior at nationals before taking the crown this year. Otero qualified automatically for nationals after last year’s performance, but elected to join his teammates at UIL District Championships and Regionals to help them qualify as a team.

NSDA has more than 140,000 student-members compete across the nation, and approximately 3,000 qualify for the national tournament each year.

Otero is set to attend The University of Texas at Austin this fall where he will compete for the UT Speech & Debate team.