One person has died, and nine others are missing after a float plane crashed west of Whidbey Island on Sunday afternoon.

WHIDBEY ISLAND, Wash. - One person has died, and nine others are missing after a float plane crashed west of Whidbey Island on Sunday afternoon.

The plane went down shortly after 3 p.m. near Mutiny Bay.

Initial calls to 9-1-1 indicated that the plane crash-landed nose first into the water. People living on the island miles away reported hearing the boom – many confused by what it was that they were hearing.

After close to a 20-hour search, the U.S. Coast Guard suspended the search for the remaining nine people who were aboard the plane. Officials say they covered 1,283 nautical miles and were unable to find anyone else.

The families' next of kin has been notified.

Per the Spokane County Human Rights Task Force, Sandy Williams, the civil rights activist who was a driving force behind the Carl Maxey Center and a Black newspaper ‘Black Lens’ in Spokane, was aboard the plane that crashed into Puget Sound.

"Together, with all of Spokane, we mourn the loss of Sandy Williams. Sandy was a voice for the voiceless, a tireless advocate for marginalized people in Spokane, a journalist unafraid to speak truth to power, a builder of hope in her vision for the Carl Maxey Center, and a beloved friend to countless members of our community.  Our hearts go out to Sandy’s family. While she may be gone, her legacy is assured," the organization wrote on Facebook.

"It sounded like dynamite went off," said Rick Rasmussen – who was on the beach with his wife when the plane went down.

Rasmussen didn’t see the plane itself, but an estimated splash 20-30 feet in the air caught his attention more than a mile away from the beach. At first, he wasn’t sure whether a boat had exploded or something else.

According to Flight Aware, the plane was traveling around 100 mph shortly before it dropped off of it’s tracking system.

Using information filed online, FOX 13 was able to track the 55-year-old plane to a charter flight company based in Renton: Northwest Seaplanes. The pilot – along with 9 passengers, including 1 child – had left Friday Harbor and was heading toward Renton when the plane went down.

Friends of the victims declined to identify them by name, but said that a large group had left San Juan Island earlier in the day – some of the group were on another charter, while the others were on the plane that crashed.

Despite cold-water temperatures and the long period since the initial wreck, the U.S. Coast Guard said they are still calling this a search-and-rescue effort

"It was confirmed the Coast Guard and agencies have night capabilities so we’re ready to continue into the darkness," said Lt. Jon Gabelein, with the Whidbey Island Fire Department.

Gabelein told FOX 13 that the initial crash led their crews out the water immediately, but that the plane had already sunken beneath the waves. Civilians that were already out on the water were the first to arrive, but little was visible following the crash.

Making matters more difficult, the water was moving quickly throughout the rescue efforts – shifting crews multiple times on the west side of Whidbey Island.

"We found one individual and we brought them on our rescue boat here to the boat launch," said Gabelein. "And our search effort continues to move with the tide and the current. We’re not in the same place very long, things keep moving out there."

Late in the evening, a pair of Coast Guard boats returned to a nearby boat launch with debris from the wreckage. It is unclear what information may be gleaned from the debris, but NTSB is planning to take over the crash investigation while the Coast Guard will continue search efforts. 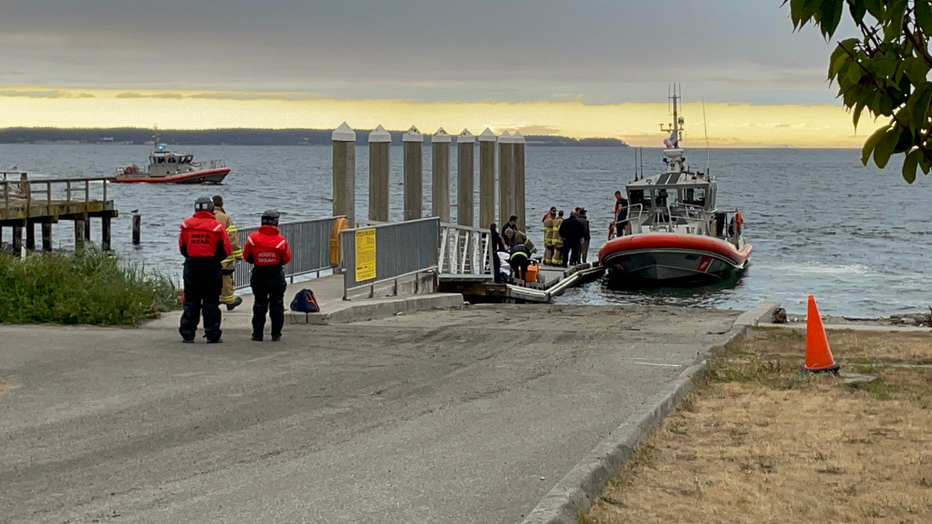 The Coast Guard also deployed these resources to search for the plane and those on board:

The cause of the incident is unknown at this time.

The names of the victims will be released on Tuesday.

This is a developing story and will be updated as information becomes available.