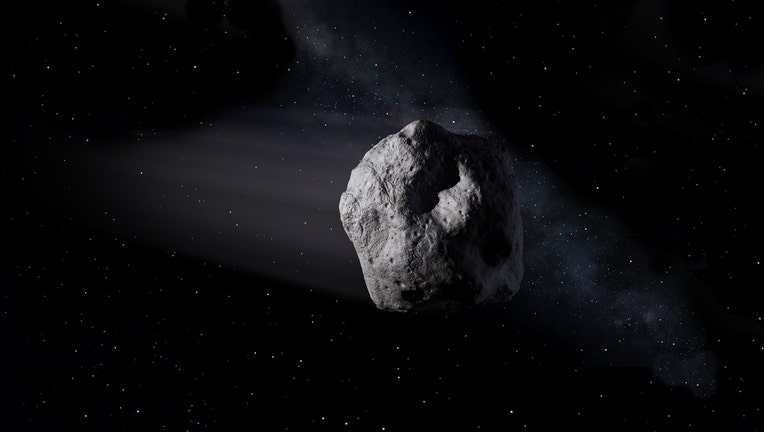 FILE - Artist rendering of an asteroid flying through space. (NASA)

Astronomers have recently discovered "planet killer" asteroids hiding in the glare of our sun, and one of them could one day impact Earth.

A total of three asteroids were found and have been dubbed 2021 LJ4, 2021 PH27 and 2022 AP7, according to the study which was published in The Astronomical Journal this September.

What makes an asteroid a planet killer?

According to Scott Sheppard, the lead author of this study, an asteroid has to be larger than 1 kilometer, which is over 3,200 feet.

"Because they are larger than about 1 km in size, which if they hit the Earth, would create a mass extinction event as the atmosphere would be covered in dust for years afterward," according to Sheppard.

The asteroid named 2022 AP7 has the largest potential to cross paths with Earth and have devastating effects, but that likely won’t happen for hundreds of years, Sheppard reassured.

It’s also quite large. AP7 is roughly the size of four Empire State buildings lined up from tip to end in length, Sheppard said.

2022 AP7 is the largest potential hazard to Earth found in the last eight years, Sheppard added. It will cross the planet’s orbit but there is no current calculation for when this could happen only because we probably won’t be here for it to really matter.

All three asteroids were discovered as astronomers observed the areas of both Earth’s and Venus’ orbits during twilight using a Dark Energy Camera.

This type of camera has the ability to cover large areas of sky but most importantly, it can detect faint distant objects some smaller telescopes would have a hard time identifying, Sheppard explained. This is how astronomers were able to find these asteroids hiding in the sun’s glare.

"The camera itself is as big as a small car," Sheppard said.

There could be more "planet killers" floating nearby

So far, there have been about 1,000 asteroids that are about 1 kilometer discovered floating around Earth, Sheppard said.

"We expect there are some 10 to 50 asteroids of 1 km or so in size that have yet to be discovered," he added. And some of those could be potential planet killers.

He suspects the remaining asteroids are still hiding in the glare of the sun.

Astronomers will continue to search the twilight skies with hopes of identifying any more potentially hazardous objects near Earth.

The galactic slam occurred at a harmless asteroid 7 million miles (9.6 million kilometers) away, with the spacecraft named DART plowing into the space rock at 14,000 mph (22,500 kph). Scientists expected the impact to carve out a crater, hurl streams of rocks and dirt into space and, most importantly, alter the asteroid’s orbit.