LOS ANGELES - Four burglary suspects in a BMW that led authorities on a high-speed pursuit Tuesday morning through the San Gabriel Valley and Los Angeles County were detained on the 91 Freeway after surrendering to police.

The chase ended at about 8:30 a.m. when the car crashed and stopped on the westbound 91 Freeway at Downey Avenue in the North Long Beach area.

Two suspects ran from the disabled vehicle and sprinted across all lanes of the 91 Freeway, with one narrowly avoiding being struck by a car on the eastbound side. 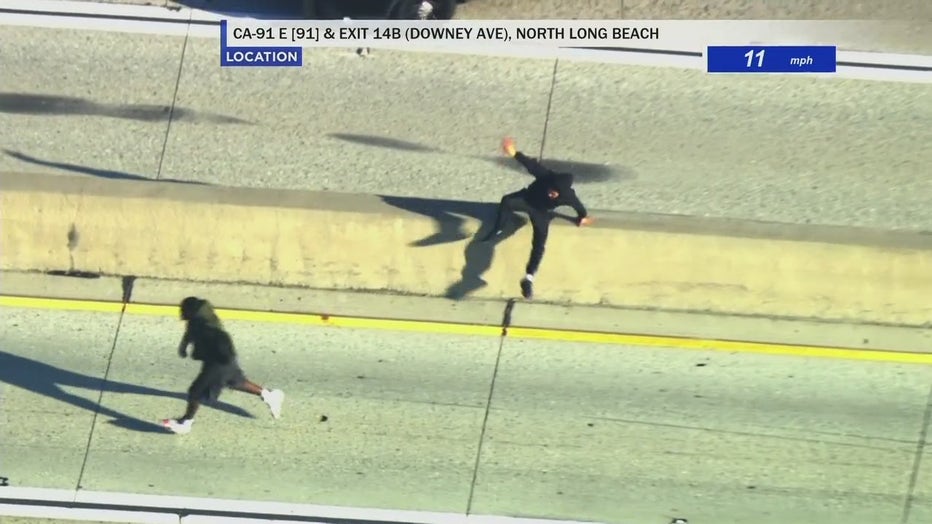 Pursuit suspects run across the 91 Freeway during rush hour traffic in an attempt to evade police.

Both suspects were ultimately taken into custody along the shoulder of the eastbound freeway.

The other two remained in the vehicle after it crashed into the big rig and became disabled. They were subsequently detained.

The suspects were wanted for a residential burglary-turned-robbery Tuesday morning in the Walnut area, police said. During that incident, the homeowner was home and spotted the suspect in the garage via home surveillance cameras. It's unclear if anything was taken by the suspect(s).

About 7:10 a.m., Los Angeles County Sheriff's Department personnel began chasing the BMW in the Baldwin Park area, and a short time later the chase was taken over by the California Highway Patrol.

The suspect collided with at least three cars during the pursuit, which lasted over an hour.

At one point, the driver was seen throwing papers out the window.

Shortly after 8 a.m., the BMW hit another vehicle on the 5 Freeway in the Commerce area. By about 8:15 a.m., the pursuit had made its way into Orange County and onto surface streets, including Beach Boulevard in the Anaheim area.

Eventually, the vehicle lost its back bumper.

The vehicle quickly got back onto the westbound 91 Freeway, and the chase stayed on that freeway until the BMW crashed into the rear of a truck near Downey Avenue, where the men were arrested after the brief foot chase on the freeway. Their names were not immediately available.

No one was seriously injured.

Additional details were not immediately available.