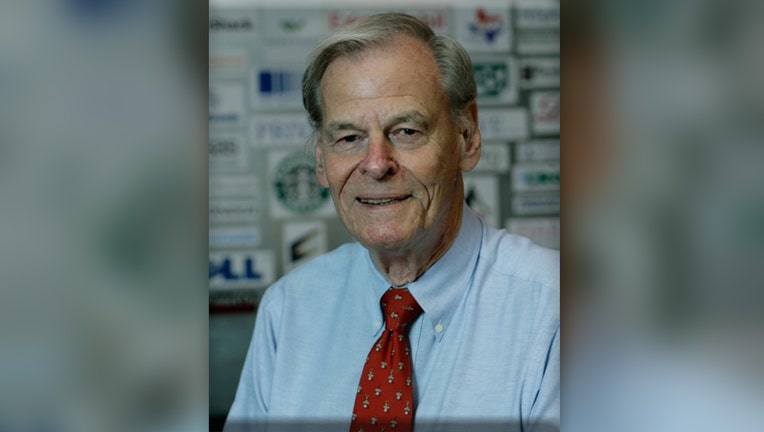 AUSTIN, Texas - Julian Otis Read, a nationally prominent public relations and public affairs expert, passed away on May 8, 2021 at Westminster Manor, a mile from his beloved mid-century modern classic home of 53 years in West Austin. He was 93.

Read was preceded in death by his wife of 47 years, Mary Anice Barber Read, a nationally honored leader in historic preservation.

Read was a pioneer in the business and political history of Texas. He retired as Chairman of Burson Cohn & Wolfe Texas, the merger successor to the Read-Poland Associates firm that Read created, owned and operated for half a century. He and associate Jeff Hunt completed the merger transaction between the global communications giant Burson Cohn & Wolfe and Read-Poland Associates on May 1, 2001, the 50th Anniversary of Read-Poland. Read still maintained a presence in the firm’s downtown Austin office at the time of his passing.

A fountain of creativity and an influence in business and political circles across Texas and beyond for almost six decades, Read was a sought-after counselor. During his varied and colorful career, he became an eyewitness to the assassination of President John F. Kennedy in Dallas in 1963.

Read was born near Ft. Worth to early Texas farming settlers James Otis Read and Tillie Naomi Swaim, who soon moved their family to Fort Worth to provide young Julian, and sister, Opal, the education that their parents never obtained. There he attended Paschal High School, where he displayed an early talent for writing. He deferred college until after he had started his first business in 1951. Subsequently, he earned an economics degree from Texas Christian University.

54 years ago President JFK was assassinated during a trip to Dallas. FOX 7's Casey Claiborne talks to a couple of people alive at the time who share their experiences and also to a University of Texas professor about what may have happened if JFK had lived.

Read began his career in 1945 at age 18 as a cub sportswriter and copy boy at the now-defunct Fort Worth Press at a salary of $15 a week. He soon sharpened his journalistic skills working alongside soon-to-be nationally acclaimed writers Blackie Sherrod, Dan Jenkins and Bud Shrake. While at the Press, Read covered golf, once brazenly calling Ben Hogan for an interview in his hospital room, following Hogan’s near-fatal crash. He also found himself on the ninth tee box with Byron Nelson, covering the opening of the Colonial Golf Tournament. Read was permitted to do outside freelance work, once doing publicity for an as-yet unknown Elvis Presley, who at the time was delighted to be earning $500 for an evening performance.

Read met his future bride Mary Anice Barber in the course of writing a golfing story about her while she was still a high school student leader. They were married on April 12, 1952, and as a consequence, he often remarked that he was the luckiest man in the world. Anice was destined to gain her own prominence in the historic preservation movement. She founded and directed the nationally honored Texas Main Street Program of the Texas Historical Commission, which continues to help to revitalize struggling small communities.

In 1951, Julian departed the Press and opened a fledgling advertising and publicity venture in a tiny one-room office-apartment. He was only the second person in all of Fort Worth to dare lay claim to knowing something about the emerging post-war practice of "public relations."

From that beginning, Read and his Read-Poland staff grew and matured to attract thousands of business and political clients, served through the firm’s five offices in Texas (Austin, Dallas, Houston, Fort Worth) and one in Washington, DC. Read-Poland provided press-relations counsel and creative services to countless major projects, ranging from construction of a nuclear power complex to a nation-wide program for the U.S. payments industry that informed debit card holders how to prepare for Y2K. Other major clients included the San Antonio HemisFair, Dallas-Fort Worth International Airport and Southwest Airlines. In the entertainment world, Read-Poland served as world-wide counsel for legendary Ringling Bros. and Barnum & Bailey Circus, illusionists Siegfried and Roy and Disney’s World on Ice for more than a decade each. In the political arena, the firm was retained by scores of prominent elected officials and political candidates, both Democrat and Republican.

In the mid-1980s, Read-Poland organized and deployed a statewide advocacy group of prominent Texans to support the design and production of a revolutionary, but controversial, Bell-Boeing V-22 Osprey tilt rotor aircraft at a Fort Worth production facility. That effort proved instrumental in helping overcome decades-long opposition to the cutting-edge aircraft and ultimately led to the purchase and successful deployment of hundreds of Ospreys by the Marine Corps and the Navy.

Over his long career, Read experienced a wide range of adventures, including being bitten on the leg by one of Siegfried and Roy’s Royal White Tigers following a television photoshoot and being robbed at gunpoint outside a Denver motel.

He helped orchestrate the introduction of Mickey Mouse on Ice behind the Iron Curtain featuring a musical welcome sung by the U.S. Ambassador to Hungary. He put together the production team that revamped "The Darrell Royal Show" and turned it into a national model for coaches’ shows, within what had hithertofore been a tired genre.

Read entered the political world when a young Don C. Kennard sought his help in 1952 to seek election to the Texas House of Representatives. Kennard was a former Arlington Heights football star who Read had covered at the Press. They won this political campaign together, the first for both. Two years later, Read earned wider prominence in guiding Weatherford, Texas Mayor Jim Wright to an upset victory against a three-term incumbent congressman backed by the Fort Worth establishment and the powerful Fort Worth Star-Telegram. Wright went on to become the Speaker of the U.S. House from 1987 to 1989. In the years to follow, Read won numerous campaigns, from the courthouse to the White House. His firm once handled seven campaigns in the same election cycle.

Read was well-known for his long association with former Texas Governor and U.S. Treasury Secretary John B. Connally, who in late 1961 recruited Read over a cup of coffee at Fort Worth’s Hotel Texas to join the first Connally campaign for Texas Governor. The relationship endured until Connally’s death in 1993.

In that first campaign, Connally was pitted against five opponents and had an initial poll rating of only 4 percent. Read conceived and produced a unique series of 5-minute vignettes adjacent to the Today television show to help familiarize voters with the candidate. The homey "Coffee with Connally" series was a significant factor in his victory over the field, and one of the earliest successful strategic utilizations of television in politics. After two more winning Connally re-election campaigns, Read became Director of Communications for Connally’s unsuccessful campaign for President in 1980. This failed presidential bid was Read’s biggest career disappointment. The loss came despite a $12 million campaign budget, the largest in history at that time.

Read’s most dramatic role in history came on November 22, 1963 when Gov. Connally was the official host for President John F. Kennedy’s visit to Texas. Read served as Connally’s representative to scores of reporters from Washington DC who had accompanied the President to Texas. Riding in the White House Press bus just a few vehicles behind the presidential limousine in the motorcade Read witnessed the assassination unfolding a few hundred feet away. He subsequently commandeered a car and rushed to Parkland Hospital, where he gave support to Texas First Lady Nellie Connally. Based on her account of the event to him, Read presented the first briefing to international media on what had occurred inside the Presidential limousine.

Fifty years later, in the fall of 2013, Read completed a book published by the University of Texas’ Briscoe Center, recalling his experiences half a century earlier.  Titled "JFK’s Final Hours in Texas," the work describes the joy of the trip through San Antonio, Houston and Fort Worth, and the horror of the tragedy in Dallas.

Beyond the constant love and support of his family, Julian was most grateful for his loyal Read-Poland/Cohn & Wolfe colleagues, the thousands of clients who gave him their trust, and the legions of friends who have continually blessed and enriched his life. He always insisted that the firm could have never achieved its prominence and success without the talents and efforts of his dedicated and enthusiastic staff.

A memorial service will be held during interment at the Texas State Cemetery in Austin on Thursday, May 13, at 10 am. Desired memorials may be directed to the Texas Historical Commission Anice Read Texas Main Street Center Fund, The LBJ Library, University Christian Church, Pioneer Farms or the donor’s choice.