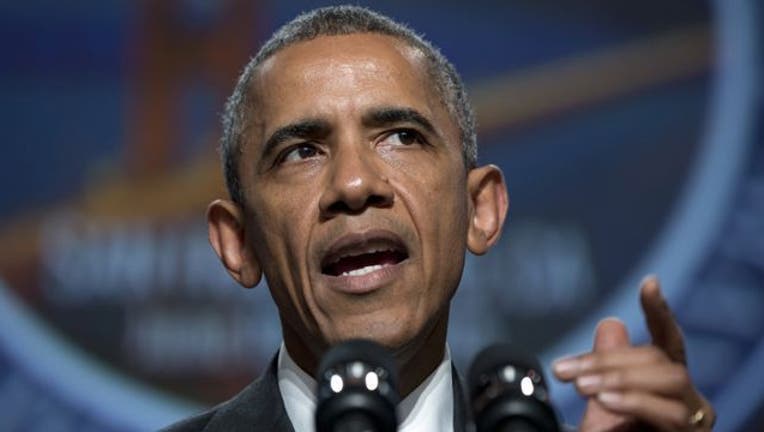 As Hillary Clinton secured the delegates needed to become the presumptive Democratic presidential nominee, Obama was on the verge of formally endorsing his former secretary of state. And then he plans to aggressively make the case against Republican Donald Trump. White House officials say the announcement could come within days, although not before Democrats in New Jersey, California and four other states vote Tuesday in contests expected to solidify Clinton's claim.

The timeline is likely to hold regardless of how Clinton rival Sen. Bernie Sanders reacts to the Tuesday outcome, the White House said Monday.

Obama called Sanders on Sunday to discuss next steps, according to a Democrat familiar with the call. The Democrat spoke on condition of anonymity because the person was not authorized to discuss the private conversation, and would not reveal any details about it.

White House and Clinton campaign aides have been discussing the sequencing of the long-expected announcement, and Obama's schedule has several possible opportunities for maximizing the impact. On Wednesday, he's due in New York City to address donors at a Democratic National Committee fundraiser in Clinton's home state. He'll also tape an appearance on "The Tonight Show Starring Jimmy Fallon," a favorite with the coveted young demographic, for the show set to air Thursday night.

The news will likely be followed by a first joint appearance before long.

Choosing the setting and timing is delicate diplomacy for the White House. Officials are trying to negotiate as gentle an ending as possible to what has become a contentious primary, hoping not to alienate Sanders' most passionate voters.

But key dynamics remain unsettled. Although Clinton has the number of delegates needed to win the nomination, it remains unclear whether she will seal the deal on a high note, with a victory in California, or whether a Sanders win in the state would make Obama's endorsement appear more meddlesome.

On Monday, Clinton noted the timing of the expected endorsement has symbolic weight: Tuesday marks eight years since her concession speech and endorsement of Obama after their 2008 primary showdown.

Campaigning in Los Angeles, Clinton said the timing of an official endorsement was "up to the president." But she also said she looks "forward to campaigning with the president and everybody else."

Sanders, asked by reporters in San Francisco if he had talked to Obama, demurred. "Right now we are campaigning," he said.

Last week, Obama declared the Democratic contest was "almost over" and suggested he was waiting for the Tuesday contests before making his move.

The president said he's been waiting on the sidelines "rather than be big-footing the situation," to ensure voters are deciding the outcome. Still, at key moments, Obama has offered high praise and needed defense for Clinton and little comparable support for Sanders.

The White House and the Clinton backers are hoping the moment will serve as something of a reset button, ending the surprisingly long and contentious primary and refocusing Democrats on the history in the making — Clinton would be the first female major-party nominee — and the job of defeating Trump.

It remains unclear whether Sanders and his backers are ready for a reset. Although the Vermont senator is looking at an insurmountable delegate deficit, he's not said he'll go quietly.

Asked Monday whether an Obama endorsement of Clinton would affect his campaign, Sanders deflected, saying he was being asked to speculate before an important primary in California.

Meanwhile, many of his supporters have expressed a deep distrust in the Democratic primary process — particularly the influence of party leaders.

White House spokesman Josh Earnest on Monday suggested the president had no qualms about the math.

"Certainly somebody who claims a majority of the pledged and superdelegates has a strong case to make," Earnest said, adding that once voters weigh in Tuesday, "we may be in a position where we have much greater sense of what the outcome is likely to be."

One of Obama's tasks will be bringing along the young, progressive voters who have been a key part of his base but have lined up behind Sanders this year. The president wants to retain his goodwill with those voters.

White House officials say the president is planning to be a steady and active player on the campaign trail. Unlike recent sitting presidents, Obama remains popular enough to be welcome in swing states and Democratic strongholds.