People on both sides of the abortion issue are reacting after a Supreme Court draft opinion on overturning Roe v Wade was leaked Monday. Protesters were at the State Capitol Tuesday evening.

"I came of age before Roe v. Wade like some of you here, and we know what it was like beforehand and we know what’s happened since," said State Rep. Donna Howard who attended one of the rallies. "This is about having autonomy over your own bodies and your own destinies."

Texas lawmakers on the opposing side also chimed in on Tuesday. 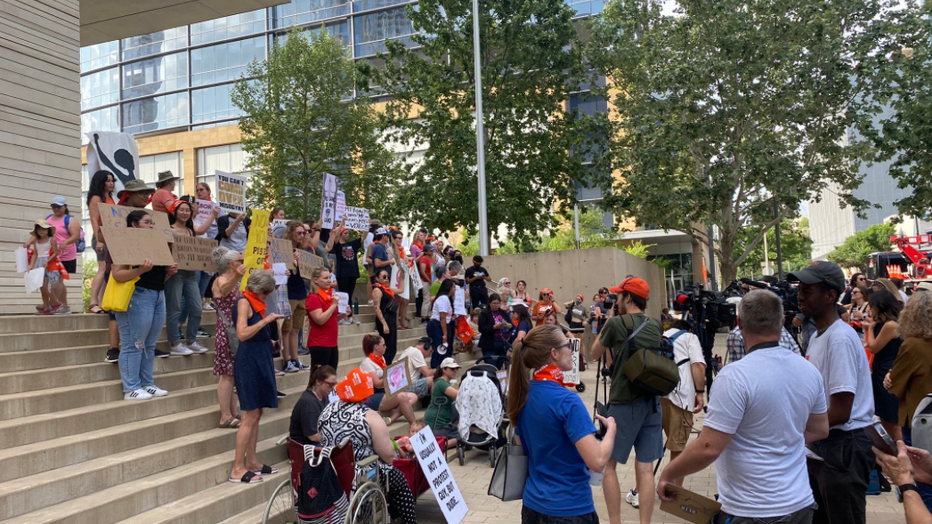 Protesters headed to the State Capitol after a leaked draft opinion regarding Roe v. Wade

"If accurate, that Roe v. Wade is set to be overturned, this is a great day for life," Lt. Gov. Dan Patrick said in a statement. "A Supreme Court decision to overturn Roe adheres to the Constitution and returns the decision on abortion back to the states as mandated by the 10th Amendment."

Though this isn’t the first Supreme Court-related leak in history, law experts told FOX 7 that a leak of this magnitude is unprecedented.

"Yesterday was like dropping two nuclear bombs into the U.S. Constitutional landscape," said Richard Albert, a William Stamps Farish Professor in Law, Professor of Government and Director of Constitutional Studies at UT School of Law. "This really is an attack on the integrity of the court and on the law of the United States."

Albert, who also previously served as a clerk for the chief justice of the Canadian Supreme Court, said the leak could inspire changes to the system going forward. The court could change the way it does its internal work or Congress could enact a law that classifies the work product of the Supreme Court. That would mean a similar, future scenario would result in jail time.

Though Chief Justice John Roberts has ordered an investigation into the leak, whoever is responsible may face professional consequences, at most.

"There's essentially not any sound basis for legal liability or for criminal liability with regard to leaking this particular piece of information," said Eddy Carder, a constitutional law professor at Prairie View A&M University.

The reason for the leak is under much speculation. Some say it was done to pressure justices into changing their minds or to allow for social activism and influence ahead of a final decision.

Albert said it could also be someone who sides with the majority opinion in the draft, hoping to "lock in" those votes.

For now, it’s a tense waiting game. Justices aren’t expected to release their final opinion until the summer.

The shockwave continues following the leak of the Supreme Court draft opinion that could ultimately overturn Roe v Wade.

"This thing has the potential of really spiraling out of control," said Carder. "Some individuals are saying because of that the court needs to issue this decision in a more expedited fashion and to do so as soon as possible."

If Roe v. Wade is overturned, the issue of abortion is put in the hands of individual states. According to Albert, Congress could pass its own law protecting abortion. However, that is essentially impossible in the status quo because of the filibuster.

In September, Texas lawmakers passed the S.B. 8 which bans abortions once a heartbeat is detected. Texas also has a "trigger law" which means if Roe v. Wade is overturned, abortion will almost immediately become illegal statewide, with an exception for women whose life is at risk.