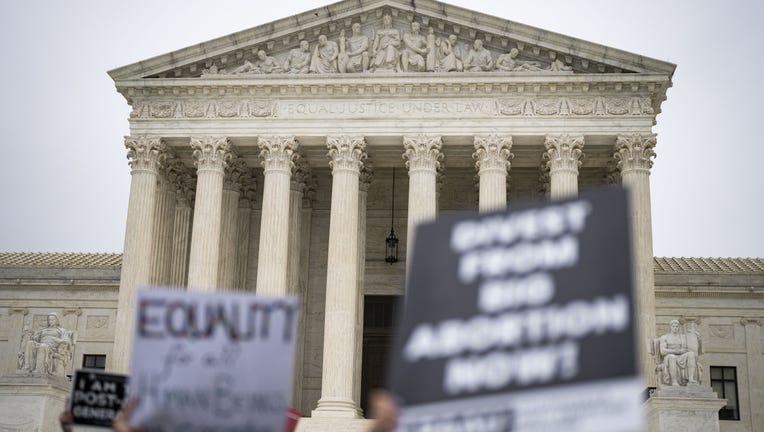 The U.S. Supreme Court in Washington, D.C., U.S., on Tuesday, May 3, 2022. Abortion rights suddenly emerged as an issue that could reshape the battle between Democrats and Republicans for control of Congress, following a report that conservatives on

AUSTIN, Texas - Some top Texas officials have weighed in on the leaked draft majority opinion that signals that the U.S. Supreme Court is poised to overturn the landmark 1973 Roe v. Wade case that legalized abortion nationwide.

The leaked opinion was obtained by Politico and Supreme Court Chief Justice John Roberts confirmed its authenticity and said that he has ordered an investigation into what he called an "egregious breach of trust."

Texas Lieutenant Governor Dan Patrick responded to news of the opinion with a statement saying, "If accurate that Roe v. Wade is set to be overturned, this is a great day for life." His full statement is as follows:

If accurate that Roe v. Wade is set to be overturned, this is a great day for life. Media reports estimate that as many as 62 million innocent babies have been aborted since the Supreme Court decided Roe in 1973.

Texas has already taken decisive action on this issue. Not only did the Texas Legislature pass the Heartbeat Bill that has already saved thousands of innocent babies since becoming law last September, we also passed the Trigger Bill, which I made a top priority last session.

A Supreme Court decision to overturn Roe adheres to the Constitution and returns the decision on abortion back to the states as mandated by the 10th Amendment. The Trigger Bill ensures that if Roe is overturned, abortion is banned in Texas. Our Trigger Bill protects the mother from any criminal or civil penalty. If a doctor attempts an abortion, it is a second degree felony. If the baby dies, that doctor would face a first degree felony.

Senate Bill 8, the nation's most restrictive abortion law, has been reinstated, two days after a federal judge placed a temporary injunction on it.

I am sure the left will fight to allow abortion in Texas. They will not win that fight.

We are steadfastly a pro-life state and have made tremendous efforts to support women in their decision to choose life. I have led the charge to more than double funding for our Alternatives to Abortion program, which provides services to women who choose life. We will also continue to strengthen adoption programs in Texas and support families who welcome adopted children into their loving homes.

Texas has led the way to protect innocent life in the womb, and we will continue to do so moving forward in the Texas Senate.

Meantime, Texas Attorney General Ken Paxton responded on Twitter saying, "I hope that #SCOTUS returns the question of abortion where it belongs: the States. This is why I led a 24-state coalition in support of MS’s law banning them after 15 wks. I’ll con’t to ensure that TX protects the unborn & pray for the end of abortion across our nation.#ProLife"

WHAT DID THE LEAKED SUPREME COURT OPINION SAY?

In the opinion, Justice Samuel Alito says the 1973 landmark decision guaranteeing constitutional protections of abortion rights, must be overruled. Alito, a member of the court's 6-3 conservative majority who was appointed by former President George W. Bush, went on to criticize the 1992 decision from Planned Parenthood versus Casey, which upheld the right to an abortion.

"Roe was egregiously wrong from the start. It's reasoning was exceptionally weak. And the decision has had damaging consequences," Alito wrote.

"We hold that Roe and Casey must be overruled," the draft opinion states.

The majority draft was written in response to the Mississippi case, Dobbs v. Jackson Women's Health Organization, which bans most abortions after 15 weeks of pregnancy.

Politico cautioned that the draft was written in February and that it may have already been re-written. Sometimes justices change their votes as well.

If Roe v. Wade is overturned, it would remove the federal guarantee of abortion protection and allow each state to set its own rules.

The court is expected to rule on the case before its term is up in late June or early July.