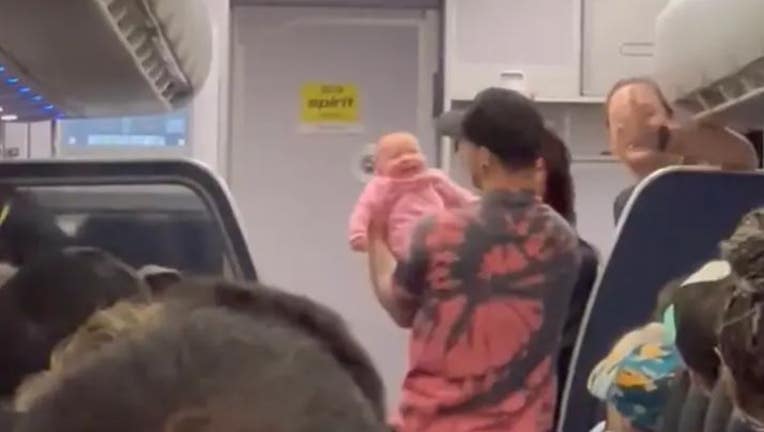 The baby was filmed smiling at her father after the incident.Twitter / @iancassette_wx

A nurse is being hailed as a hero when her quick thinking on a plane helped save the life of a newborn baby onboard a flight to Orlando, Florida.

Tamara Panzino’s heroic actions were praised online by Ian Cassette, a meteorologist for Fox 35 in Orlando, who coincidentally was seated on the same flight.

Cassette posted a video to Twitter taken during the aftermath of the heart-wrenching incident in which Panzino was able to successfully help 3-month-old Anjelé who stopped breathing. It's not clear what caused the baby to stop breathing on the Spirit Airlines flight, but onlookers noted that the child's lips went purple.

"On my flight back from Pittsburgh to Orlando, a baby stopped breathing three rows ahead of me. Thankfully a nurse (Tamara Panzino) was able to get the baby to breathe again," Cassete wrote.

"The parents of three month old Anjelé were terrified and had never experienced this before," he wrote in a follow-up tweet. "They praised the positive energy of the plane and the heroic actions of Tamara for saving her."

Cassette confirmed that an emergency crew met the family when the flight landed in Florida. What caused the infant to stop breathing is not publicly known at this time.