Rabbits are facing their own deadly viral outbreak

Rabbit hemorrhagic disease, or RHDV2, does not impact humans and is not a coronavirus.

LOS ANGELES - As humans deal with the devastation of the novel coronavirus, an outbreak among wildlife has occurred in the U.S. which threatens the wild and domestic rabbit population along with their environments.

Rabbit hemorrhagic disease or RHDV2 is not a coronavirus and does not impact humans or any other animals, according to the U.S. Department of Agriculture (USDA).

RHDV2 is highly infectious among rabbits, and can survive extreme conditions like dry and freezing temperatures. Unfortunately, the virus is only detected upon sudden death — blood-stained noses caused by internal bleeding are visible signs of the illness.

The lethal disease is highly contagious and if left unchecked has the potential to “cause significant declines” of rabbit populations while causing serious negative effects to their environments.

“Unfortunately, we may also see impacts to species that depend on rabbits for food, as rabbits are a common prey species for many predators,” said  California Fish and Wildlife Department (CFWD) Veterinarian Deana Clifford.

According to the USDA, the first variant of the current rabbit virus originated in China in 1984 and caused hundreds of millions of fatalities in domestic and wild rabbits when it eventually spread to Europe. 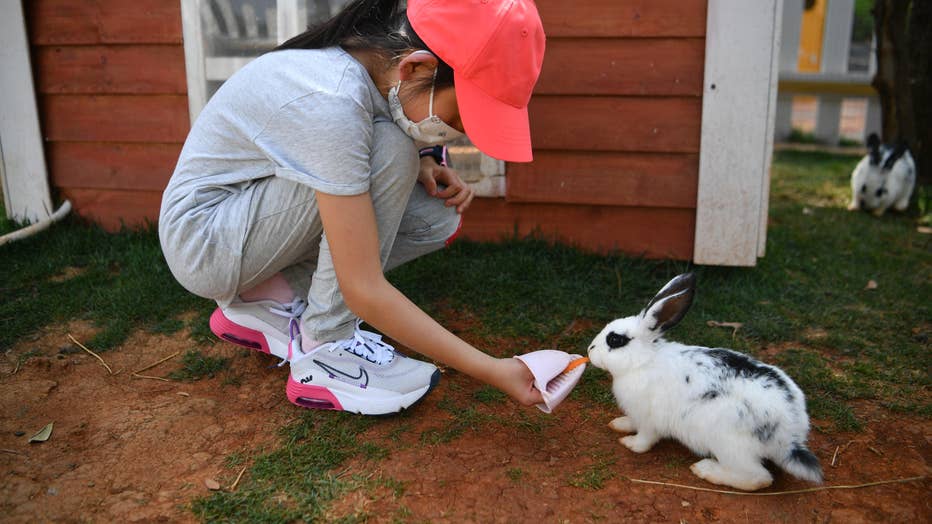 FILIE - A girl feeds a rabbit at a zoo. (Photo by Liu Ranyang/China News Service via Getty Images)

RHDV2 first popped up in parts of Canada in 2018 and has most recently appeared in California.

The USDA said a vaccine currently exists but “is not recommended for use where the disease is not widespread in wildlife.”