CLEARWATER, Fla. - A young white dolphin has been spotted swimming close to mom in Clearwater, getting attention on social media as well as out on the water.

It would be easy to assume its coloring is due to albinism, but biologists with the Clearwater Marine Aquarium don't think that's the case.

"In the beginning when we were documenting it for the tail fluke loss, we did notice it was lighter, so we believe that there was some gradual transition through time to this lighter coloration to this point," said Savannah Gandee, a marine biologist.

The tail-fin injury is likely due to a shark bite, Gandee says. However, officials don't think it's impacting the dolphin's ability to swim.

Caitlin Mackey was at the Clearwater Basin Marina when she spotted three dolphins swimming next to the sea wall, including this extremely rare, all-white calf.

Its color, however, remains a bit of a mystery.

"We don't really know for sure. This isn't something that's common at all," she said.

CMA is putting out a warning to the public to just let the animal be. 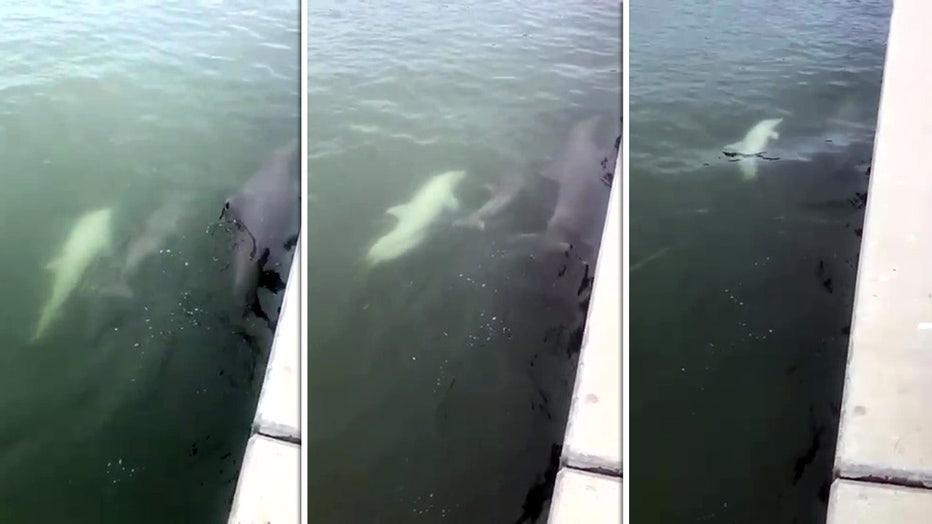 "We just really want people to remember that we want to maintain its wild status, allow it to thrive, and especially get past this critical first year of its life," she said.  "Most important to boaters, especially if this animal happens to be nearby, we ask they responsibly view it."

Dolphins are, of course, federally protected animals; harassing one is illegal.

RELATED: Louisiana's rare pink dolphin ‘Pinky' is said to be a mom to a pink baby dolphin

So far they say "Cherub," as they call it, seems to be doing just fine despite its color.

"It is hanging out with mom pretty closely and showing high-energy behaviors, showing it's a healthier animal," Gandee added.