The blue-and-white checked gingham dress worn by Judy Garland in the classic 1939 movie The Wizard of Oz is up for auction at Bonhams.com.

NEW YORK - The dramatic story of an iconic movie costume from "The Wizard of Oz" thought lost for decades went through another plot twist Monday, when a judge blocked its planned sale at auction.

One of the blue-and-white checked gingham dresses that Judy Garland wore in 1939 for her role as Dorothy was scheduled to be part of an auction of Hollywood memorabilia in Los Angeles on Tuesday, put up for sale by Catholic University of America. The dress was rediscovered at the school last year in a shoebox during preparations for a renovation.

Auctioneer Bonhams listed a presale estimate of $800,000 to $1.2 million for the dress before it was withdrawn.

RELATED: Dress worn by Judy Garland in ‘The Wizard of Oz’ could sell for up to $1.2 million 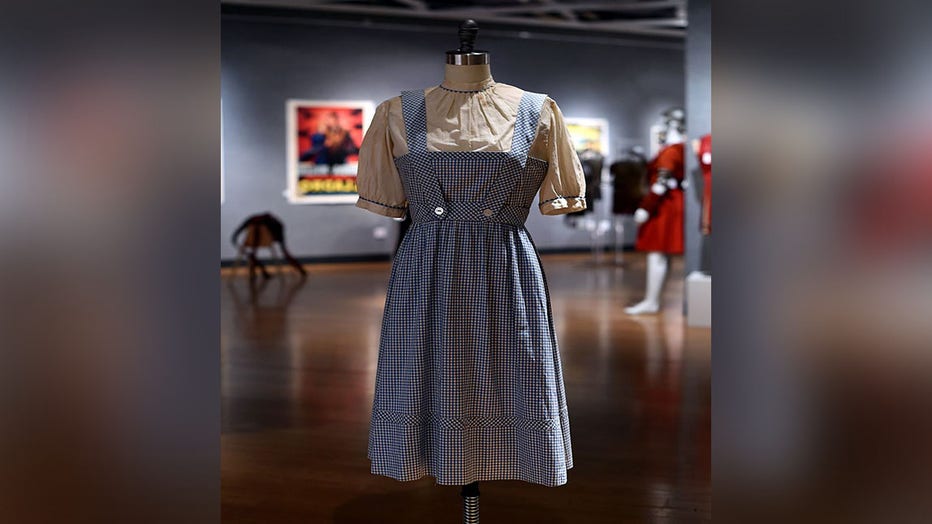 A Judy Garland-worn "Dorothy" dress from The Wizard of Oz is displayed during a press preview on November 19, 2015 in New York. (TIMOTHY A. CLARY/AFP via Getty Images)

But U.S. District Judge Paul Gardephe in Manhattan granted a motion for a preliminary injunction after a hearing in a lawsuit filed by a relative of Father Gilbert Hartke, who worked at the university and was given the dress in 1973.

Hartke died in 1986; a niece, Barbara Ann Hartke, 81, filed a lawsuit against the school and the auctioneer earlier this month after media accounts that the dress was going up for auction.

In her lawsuit, she said that as her uncle’s closest living relative, the dress belongs to her. She says it was given to him as a personal gift by actress Mercedes McCambridge.

According to her lawsuit, the university "has no ownership interest in the dress as ... there is no documentation demonstrating decedent ever formally or informally donated the dress to Catholic University."

In a filing opposing the lawsuit’s request for the injunction, the school’s attorneys said that as a Dominican priest, Hartke had taken a vow "to never accept gifts in his personal capacity" and so the dress couldn’t be considered part of any estate.
Catholic University officials had said the dress went missing for decades after being given to Hartke, then head of the drama department.

Garland wore several versions of the dress during the filming of the movie; auctioneer Bonhams said the one found at Catholic University was one of two that still had its accompanying blouse, and that Garland wore it in the scene in the castle of the Wicked Witch of the West.

In a statement, lawyers for the university said, "We look forward to presenting our position, and the overwhelming evidence contradicting Ms. Hartke’s claim, to the court in the course of this litigation."

An email seeking comment was sent to Hartke’s attorney.