What is salmonella infection and what are the symptoms?

People can get infected by eating contaminated food or drinking water, as well as by touching infected animals or their environment.

WASHINGTON - Federal health officials are rethinking their approach to controlling salmonella in poultry plants in the hope of reducing the number of illnesses linked to the bacteria each year, and on Tuesday the U.S. Department of Agriculture announced several steps it plans to take to achieve that goal.

The USDA says the industry has succeeded in reducing the level of salmonella contamination found in poultry plants in recent years, but that hasn't translated into the reduction in illnesses the agency wants to see.

Poultry is linked to roughly 23% of the 1.35 million salmonella infections in the U.S. each year that lead to roughly 26,500 hospitalizations and 420 deaths, and those numbers haven't changed much. Salmonella typically causes diarrhea, fever and stomach cramps, and severe cases require hospital care.

So the U.S. Department of Agriculture plans to set up pilot projects to try changing the way it tests for salmonella in plants and to try encouraging the industry to do more on the farm to reduce the amount of bacteria on chickens before they enter the plant. The agency also plans to hold a series of meetings with industry officials and interested groups to discuss other ways to reduce the risk of salmonella illnesses.

"This is deeper, more targeted and more system-based approach than in the past," Agriculture Secretary Tom Vilsack said. "The hope is that we can significantly reduce the risk of these serious cases and it’s certainly worth the effort." 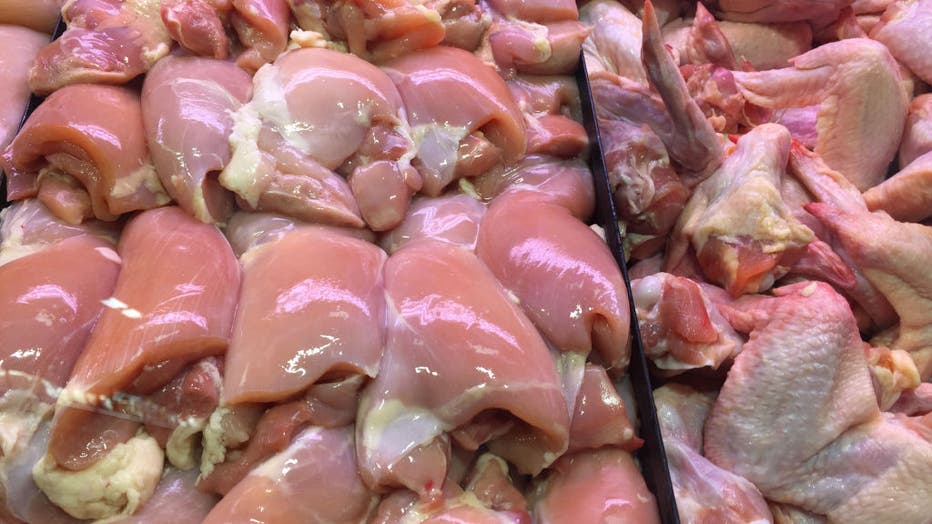 FILE - Chicken at a grocery store on Sept. 16, 2021, in Toronto, Canada. (Photo by Creative Touch Imaging Ltd./NurPhoto via Getty Images)

The agency also wants to encourage farmers to take a combination of steps proven to reduce bacteria in their chickens, including using more vaccinations, adding probiotics to feed and doing more to ensure that the birds' bedding, food and water remain clean.

"We pledge to continue to do our part — the industry will remain committed to investing significant resources — at the hatchery, feed mill, farm and plant — to further enhance the safety profile of chicken products. But there is no law, regulation or silver bullet that will make raw chicken a 100% sterile product," said Ashley Peterson, the trade group's senior vice president of scientific and regulatory affairs.

The USDA said 89% of the nation's poultry processing plants are now meeting the agency's performance standard for limiting salmonella in chicken parts. That is up from three years ago when only 71% of the plants met the standard.

National Turkey Federation President Joel Brandenberger said the industry already shares ideas about the best ways to control salmonella so the companies look forward to participating in the USDA roundtables.

"Because there are no simple solutions, improving food safety requires the type of collaborative approach USDA is advocating," Brandenberger said.

Zach Corrigan of Food and Water Watch, an advocacy group that supports stricter food safety regulations, said it sounds like the USDA’s new efforts are "a move in the right direction" but he still hopes the agency will do more to control salmonella by declaring that meat found to have the bacteria can't be sold to consumers.

Currently, it is legal to sell raw chicken with salmonella bacteria on it, which is why health officials stress the need for safe handling of raw poultry, including thoroughly cooking the meat to kill potential germs. They also warn people should not rinse raw chicken, which can spray bacteria everywhere.

"Some consumers have told us they feel like they have to handle chicken like it’s toxic waste, and that’s not how anyone wants to cook in the kitchen. We’re hopeful that these steps laid out by USDA will result in more consumer confidence about the safety of the poultry products they bring into their homes," Ronholm said.