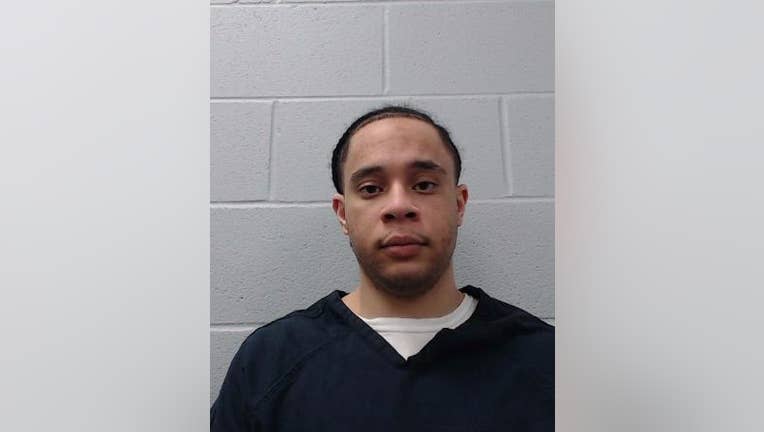 SAN MARCOS, Texas - A 26-year-old man has been sentenced to 65 years in prison for the 2019 murder of a man at a San Marcos apartment complex.

An-Drew Stephen Jones was convicted this week in the slaying of 22-year-old Nicholas Devone White of Manvel. The trial took nine days and the jury returned a verdict of guilty on July 14.

The Hays County Criminal District Attorney’s Office says that White was shot and killed on April 5, 2019 in the parking lot of the Uptown Square Apartments where he lived at the time. Witnesses at the scene before the shooting described a man wearing a yellow shirt and smoking while apparently waiting for someone.

When White arrived home, the shooter approached White while drawing a firearm and saying, "Where’s my money?" After White replied, "Are you going to shoot me?", the gunman fired at least eight times at White before jumping into a silver SUV and fleeing the scene, says the DA's office.

White was transported to Seton Hays Medical Center where he died from his injuries.

San Marcos detectives recovered spent shell casings and bullets at the scene, along with a cigarette butt apparently left behind by the shooter. Surveillance video revealed the suspect’s vehicle was a Nissan Rogue that had entered the parking lot by following a resident through the automated gate. Police later learned the car was rented by Jones, says the DA's office.

Follow-up investigations uncovered evidence that Jones owned a gun of the same caliber as that was used in the shooting, says the DA's office. Jones’ phone was tracked through electronic records traveling to the Uptown Square Apartments and then leaving immediately after the shooting and returning home.

A search of his residence revealed an empty gun case containing a receipt for a handgun, a holster and clothing that had been thrown in the trash. The holster contained a magazine filled with cartridges of the same make and caliber as those recovered at the crime scene, and the discarded clothing included a yellow shirt with Jones’ DNA on it, says the DA's office. Jones’ rental car was found in the parking garage of his residence and White's blood was discovered on the car, and the steering wheel and gearshift lever had gunshot residue on them.

Jones surrendered himself to police days after the shooting.

At the sentencing hearing, Jones took the stand and admitted he had shot and killed Nicholas White, claiming the killing was over money that White owed for drugs purchased from him, says the DA's office.